o Anan, a name that is familiar to most of the constructed players. Who has never seen a “Go Anan deck” in a GP or PT Top 8? You’ve never heard of him? Go and type Go Anan deck on Google, you’ll have about 26 000 responses. 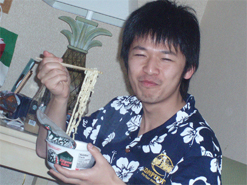 I had heard so much about Go Anan before actually meeting him that at some point I actually thought he did not even exist, that he was just an urban legend. But the myth was here, at PT Osaka, drafting with top pros and helping them to build their decks.

Not only is Go Anan good, he’s also very modest. He’s embarrassed playing so many people knowing the name without knowing the player himself.

Olivier: Can you introduce yourself to the readers?
Go Anan: My name is Go Anan, I’m almost 23 and I live in Boston where I study English and business.

Olivier: Every year, Tsuyoshi Fujita tells me, "this year, Go Anan Pro Player of the Year". Is it the good year?
Go Anan: I don't think so, I can't play enough magic this year as I spend too much time studying.

Olivier: How does it feel to have so many decks called Go Anan deck?
Go Anan: I feel funny, but I want people not to call their deck Go Anan, it is embarrassing.

Olivier: What do you think of the new draft format?
Go Anan: The format is the best ever for me. It is very fun.

Olivier: Is there any archetype you like better than the others?
Go Anan: In Ravnica/Guildpact/Dissension, I like black white blue a lot.

Olivier: What do you think is the most underrated card in RGD?
Go Anan: Hmm, in Boston I’d say Ghost Warden.

Olivier: And the most overrated?
Go Anan: Peel from Reality.

Olivier: What is your favorite format ?
Go Anan: Standard. 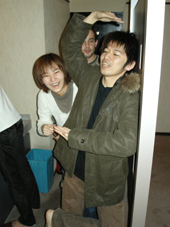 Olivier: Favorite magic card?
Go Anan: Unholy Strength. A long time ago, I used the card a lot in the black beatdown deck I received from Tsuyoshi Fujita. This is the deck I’ve liked to play the most.

Olivier: Do you have mentors or players you respect more than others?
Go Anan: Tsuyoshi Fujita, he taught me everything.

Olivier: Who will win PT Prague?
Go Anan: Not a Japanese, you or Antoine.

Olivier: What would be your dream team for a pt?
Go Anan: Kai Budde, Masashi Oiso and you.

Olivier: You are not on the team ?
Go Anan: You mean I have to be in a team?

Olivier: Not necessarily indeed. Let’s talk about life outside Magic. What are your hobbies?
Go Anan: Boring.

Olivier: What is it? Come on, I’m sure it’s not boring.
Go Anan: You know!! I’ve heard you played boring with Japanese. You throw a ball and hit 10 pins.

Olivier: Oh! I see! Bowling!!! (In Japanese, you spell “l” and “r” the same, so the transcription from the Japanese is “boring” or “boling”)

Olivier: What is your favorite movie?
Go Anan: Back to the future Trilogy

Olivier: And the worst memory?
Go Anan: PT Osaka too, the final round, because if I had ID, I could have got money but I did not know it, so I played and lost.

Olivier: Anything to add or to share with the readers?
Go Anan: I want people to forget the name, Go Anan.

Olivier: Why? Would you like to be seen as an ordinary player?
Go Anan: I don’t think I deserve being famous so it’s really embarrassing.

Olivier: Thanks a lot Go Anan!

Testing advance here in Amsterdam, as I’ve just finished my 16th draft in five days. We are holding 4 drafts a day with one Level 6, two Level 5, five Level 4 and two Level 3, which gives us a pretty good practicing. Here are few shots from the first days spent testing.

One more way to verify Go Anan’s popularity. Julien Nuijten, Rookie of the Year and World Champion 2004 keeps all his PT badges. Which is the only one visible? 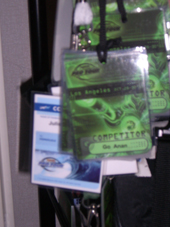 Only Frenches and Dutches can do that. Ladies and gentlemen, the cheese-draft 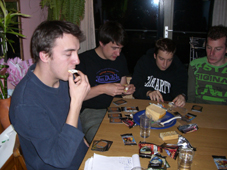 Even Julien’s bear seems to be practicing on Magic: Online! 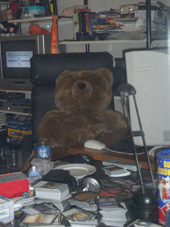 I interviewed Mr Go Anan on Julien’s computer listening to The Strokes_IS THIS IT (their first record, by far the best), and rereading my notes while listening to the birds singing in the night because Frank Karsten and Roel Van Heeswijk are sleeping right behind me.