Okay, it's Island. I can deal with that. I mean, what's an Island? All these online articles are saying that Heartbeat combo is the best deck. My deck is good against Heartbeat. Island. What's an Island, really?

No of course I don't pay the two life; I don't have a play. I mean next turn I'll have an Izzet Signet, but for now, just a Steam Vents. No worries. Steam Vents is about twice as good as Island anyway, not to mention 100 times the cost on the secondary market…

Another Island? Big deal. So you're tapping that Island… Probably it's just a Signet… I hope it's not a Howling Mine, but it's probably just a Signet, right? He didn't draw his Steam Vents like I did (if he even has Steam Vents), so the Signet is going to give him the…

Him: Eye of Nowhere.

If you're like me, you've had internal monologues like this one more than once in recent months. The land destruction-centric Magnivore deck (henceforth “Vore”), exemplified by Nik Nygaard's Top 16 monster from Pro Tour--Honolulu, has been the most successful Team Standard Steam Vents deck in a format chock full of good Steam Vents decks (Firemane Angel Control, Wafo-Tapa, URzaTron, Owling Mine, and others). Many times another Steam Vents deck actually has the upper hand (or at least a quite winnable, say, 40% matchup) against Vore… but in certain games, it is sad to say that the non-Vore control never even plays a second mana source. Its crime? Going second.

The truth is, while Counterspell decks have rarely been as effective as they were at this past year's Champs tournaments, the actual counterspells we have in today's format are considerably less potent than they have been in almost any other Standard format. There is probably good reason for this (Counterspell itself being considerably ahead of the curve in terms of staple cards, not to mention “un-fun” by many players' definitions), but that doesn't change the fact that the incentive to that class of cards comes more out of volume than anything else. The best Blue cards right now are Meloku the Clouded Mirror and Keiga, the Tide Star… It really says something about the quality of permission in Standard that the right play for Blue decks past turn 5 is to pull down their pants and tap out (when in the past, “Draw-Go” decks would win with an end step Stalking Stones activation, never committing mana on their own turns). What does it mean that Counterspells are somehow “worse” than they have been in the past? Obviously they are still good enough to play, because players at all levels are still running cards like Rewind, and some of the very best players on the planet rate Remand as a “Top Three” quality contender in Standard. For me, the main issue is that even the solid “hard” counters – Hinder and Rewind primarily – often cost more mana than whatever they are countering. The problem with this is that the counter deck is usually slower than the opposing deck, on its heels until it can establish control of the board. What happens in a four mana-on-four mana situation where the opponent leads on Tallowisp and the Blue player answers with Hinder? More than likely he is going to end up eating Dark Confidant.

Now I mention Tallowisp and Dark Confidant specifically because they fall under a giant umbrella of distinctive cards. Not only are they familiar threats in the current Standard, they are iconic two-drops. I have said it in the past, but it bears repeating: Tournament Magic has become a game increasingly defined by two-drops. Our idiom for Limited play as a community – half of all Magic probably – can be reduced to the phrase “attacking for two.” Moreover, look at the cards that define the decks we call the decks to beat… Deep Dog, Ravager Affinity, and Scepter-Chant all take their names from flagship cards like Wild Mongrel, Arcbound Ravager, and Isochron Scepter. In Standard, the most important cards include Umezawa's Jitte on offense, Sakura-Tribe Elder ramping up the board, and Remand or Pyroclasm on defense. All these cards cost two mana… Even control hating decks like Vore or Owling Mine get their starts with two-mana tempo cards like Eye of Nowhere or Boomerang, which set up the opponent and ideally force him to discard, and end up on engines based around Howling Mine and Kami of the Crescent Moon.

So what's the point?

Dissension is giving control decks a weapon and deck designers a challenge. That weapon, that challenge, is Spell Snare: 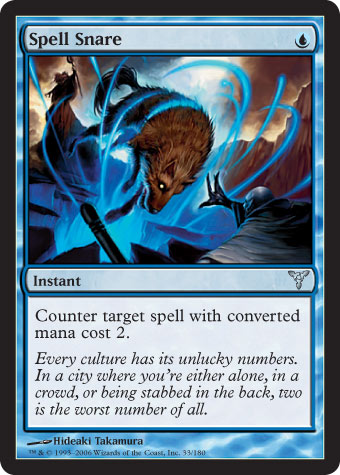 The one thing that I really like about Spell Snare is that it absolutely, positively, costs less mana than the card it is fighting.

The other thing that I really like about Spell Snare is that it's really, really good. Duress good. Meddling Mage good. In many ways, Spell Snare is the card that will undo the conventions of Constructed Magic. That is why, for deck designers, it represents a challenge.

Think about playing Deep Dog. Deep Dog is almost two different decks depending on whether or not it has a Wild Mongrel in play on turn 2. In the absence of the Savage Bastard, Deep Dog is often clunky, with four mana 2/2 flyers in hand, or glorified Durkwood Boars that are several mana too expensive to take seriously stuck in hand. When it has that Wild Mongrel, though, Deep Dog is an offensive machine, with a Grizzly Bears playing Black Lotus, making U/G one of the most feared color combinations of recent years, regardless of Odyssey Block, Standard, or Extended incarnations. 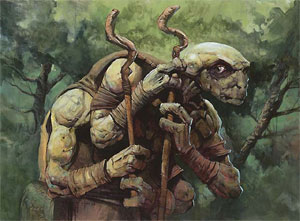 In Standard and other formats, Sakura-Tribe Elder has been used for a year and more to cheat on colored mana. Many Beacon of Creation decks did well in the pre-Ravnica Standard, playing as many as 20 Forests alongside lone copies of Island (for Meloku), Plains (for, say, Worship), or Mountain (for Godo, Bandit Warlord), never branching into dual lands. Green mages will many times keep mana light hands purely on the presence of a Sakura-Tribe Elder, assuming – especially on the play – that it will resolve, and understandably so. How much card advantage do you get when you Spell Snare a Sakura-Tribe Elder, stranding the Cranial Extraction in the other guy's hand, given that his lone Swamp is actually forty cards deep? How much time do you steal?

At the end of the day, Spell Snare will many times force the opponent to “play a different deck” than the one he thought he was bringing to the table by stopping his defining two mana play. However the importance of this new card in the general sense greatly outweighs that redefinition of decks in a matchup. A big part of its impact will be just getting through the sundry two mana spells that fill out most decks… In our initial interlude, the deck on the wrong end of the Eye of Nowhere was never going to play its Signet. Going second, it started off receiving an Eye of Nowhere (which would likely have forced a discard), and could expect a Stone Rain and Demolish follow up. If it had had Spell Snare on the first turn, that Eye of Nowhere would have been considerably less lethal, especially so early. That is not to say that the newly Spell Snare-armed control player would be out of the woods, but at least he would be able to fight Stone Rain with Mana Leak rather than never seeing a relevant play.

That said, Spell Snare can play “land destruction” itself, countering a Signet on the opponent's turn 2… or even better, on turn 3. Many times URzaTron players will leave up

on the second turn (so they can represent Mana Leak or Remand) and then play Izzet Signet on turn 3 with a land up, representing Remand or Mana Leak via

. Spell Snare that Signet, and the opponent will not only be bereft of his mana accelerator, his pants will be down for whatever mischief you've got for him on your own turn. Like Remand before it, Spell Snare is an ostensibly narrow response card that excels in a counter war.

I said last week that I thought Spell Snare would be one of the best cards in Dissension, and possibly all of Standard. I stand by this assessment, and predict adoption of this card in large numbers in Standard, with somewhat less popularity – but still considerable play – in Extended. Spell Snare is a versatile and mana efficient answer card that can undo the key cards that make essentially every competitive deck go; unlike pinpoint weapons like Cranial Extraction or Chalice of the Void, it can also stymie some random dork once you find yourself in a topdeck war, not to mention winning a key counter fight at the end of the opponent's turn. Spell Snare might not be Counterspell, but really… What more could you want for one mana?