A Portrait of the Kenriths

After we received the gorgeous Kenrith family portrait from artist Ryan Pancoast, Senior Art Director Cynthia Sheppard decided to catch up with Kate Elliott, author of The Wildered Quest, to learn how she fleshed out one of Eldraine's royal families.

Cynthia Sheppard: One of my favorite things about working on Magic is the back-and-forth nature of the collaborative creative process. You wove a new tale, The Wildered Quest, based on our world and its characters. I then had the pleasure of working with artist Ryan Pancoast, who designed and illustrated Queen Linden for the Throne of Eldraine card set, to bring the main characters of your story to life in a "royal portrait."

What went through your mind when you saw Ryan's painting for the first time?

Kate Elliott: A burst of joy.

The painting captures the dynamic of a loving and connected family (which also, of course, includes the somber responsibility and high status of a sovereign). Depicting an intact family in a story matters a great deal to me as a writer. Which doesn't mean they all get along all the time or don't have conflicts and arguments; that's part of life. But I wanted to write a story in which the (sometimes fraught but usually healthy) relationships within a family are part of, and in fact central to, the narrative drama.

There can be good reasons to write characters who are orphans or have no significant contact with family members. It is often less complicated to write a character who doesn't have to take such relationships into account as they go on their way in a story.

But most people live within a network of kinship and friendship. So, I relish the challenge of writing characters who in the world of their tale have to interact and cope with family who may help or hinder, or both. The fallout of dealing with the consequences, benefits, and difficulties of ordinary familial relationships can be one of the most intriguing elements of a strong narrative.

Also, because there is already art for Kenrith, Linden, Will, and Rowan, I was particularly thrilled to see Erec and Hazel. Ryan depicted them just as I imagine them.

CS: This is the first time we meet the two younger Kenrith siblings, Erec and Hazel. If they had their own spin-off, what kind of misadventure or trouble do you think they'd get into?

Erec is still quite young and one of those children who is cautious about new experiences. I'm sorry to say his older siblings, who adore him, would also all agree he is a bit spoiled. When he's a teen, I have a feeling he'll discover an unexpected gift or passionate interest or magical skill, and he'll pursue it with dedication and resolve.

Hazel on the other hand is an absolute troublemaker, able to talk rings around you, argue her way into and out of misadventure, and persuade and prod her band of loyal friends into all kinds of reckless mischief. Perhaps swimming in the moat (which is forbidden), figuring out where the perilous books of lore are locked away in the library, or setting just one foot into the Wilds at Choking Drum. Just one foot. Not two. Really. 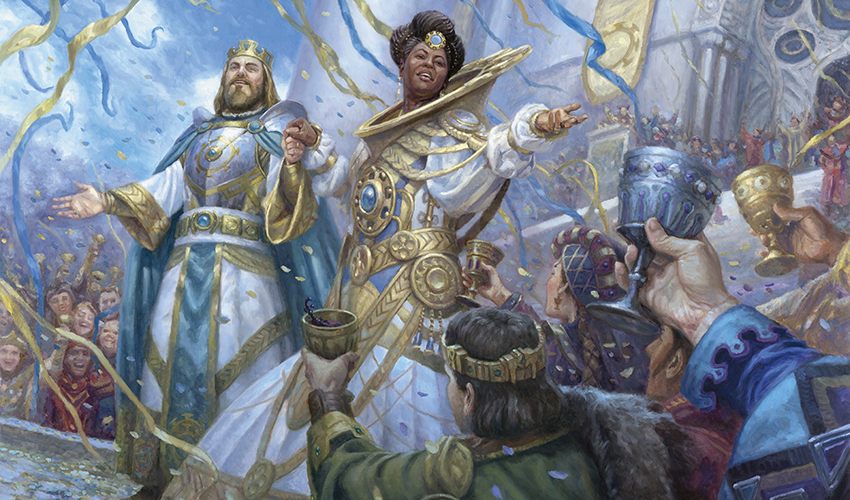 CS: Kate, I'm curious to hear about your experience writing a story set in this world. As a prolific writer of fantasy genre novels, what interested/inspired you the most about Eldraine as a fantasy setting?

As it happens, I had already done a fair bit of research into the early medieval period in Europe for my Crown of Stars epic fantasy series. In college, I also got quite interested in the late- and post-Roman era in the British Isles, which is generally accepted as the period out of which the Arthurian mythos arises. So the Arthurian aspects of Eldraine felt like coming back to a familiar and much-loved setting. I drew on that knowledge for some of the details I used, although obviously my main reference for setting was the comprehensive (and gorgeously illustrated) world guide put together by the fabulous Creative team responsible for the new Plane.

It was also great to be able to twist some well-known fairy-tale tropes and types in ways that I hope are unexpected. In some cases, these twists are a major element in the plot, and in others, they are fun details dropped in as (shall we say) Easter eggs. Find them all!

CS: An early challenge as creative lead on the worldbuilding team was finding the right balance of our two main themes: Arthurian legends and classic fairy tales. Because the card set relied heavily on fairy tales as individual expressions in the gameplay, we ended up with much greater emphasis on knights and courts than, say, races of gingerbread-folk, as a foundation. How did you manage to balance those two themes in your story?

The internals of the individual journeys are hung more on fairy-tale scaffolding. That is, they're not stated, but many readers will come to realize what the unspoken shape is. Meanwhile the externals—the most tangible elements of setting and pageantry—tend to follow the Arthurian legends. So, I guess in a way, the fairy-tale elements are nested inside the Arthurian elements, unseen but felt as the bones. If I've done my job right, both are necessary to hold up the story.

CS: Were there archetypal fairy-tale or Arthurian themes that inspired the writing for individual members of the Kenrith family?

Yes, but I can't say what they are here in print for fear my answer might give away important plot points. I know there are many people who prefer to read with no spoilers.

CS: Characters in the card game are usually depicted separately from each other in their own illustrations, so it's been a treat for me to read their voices and imagine them interacting with each other through your writing. Were there real-life siblings that inspired the way you wrote the four Kenrith children?

Not specifically. I'm one of four siblings (I'm the youngest, but I absolutely was not spoiled at all). I have three children (including a set of twins). Their dad is one of five, and my children are close to their cousins, who I've watched grow up. So I drew on my own experiences and observations of how siblings/close cousins interact. It's a great dynamic, one of my favorites to write. By the way, it was just a random coincidence that this story, like Chronicle of Bolas, involves twins. Really. Trust me. Would I lie to you?

To read the full story of the Kenrith family in Throne of Eldraine, pick up Throne of Eldraine: The Wildered Quest, available now everywhere Penguin Random House publishes ebooks (including Amazon, Barnes & Noble, and the Apple Store).