Johnnies and lovers of all things inefficient! One thing you may not know about me is that I like Magic cards and, on occasion, I like to build Magic decks with Magic cards. Naturally, not all cards are created equal. Some cards just jump out at you, like the boogeyman of creativity, and scream to be used in decks. Judging by the mail I get, Thrumming Stone is a big hit with the wacky-deck-building crowd. Other cards are tougher nuts to crack. On my creatively titled “Nut Scale,” Thrumming Stone would fall somewhere between a walnut and a filbert, while the card I'm going to look at today would be more like a Brazil nut. We're only just now developing the technology to break easily into this South American delicacy. For now, just use a hammer.

To illustrate what I mean, when Ravnica was released, Johnnies got a bunch of crazy new tools, including such oddball build-around-me cards as Doubling Season, Eye of the Storm, and the card beloved by shuffle-nuts and maniacal mana-floaters everywhere, Warp World. One card that didn't quite have this “Wow”-factor was Netherborn Phalanx. I didn't think much of this card for the longest time (like, three weeks), but then I put two and two together (or, if you prefer, I put Netherborn Phalanx and Infernal Genesis together) and it was like I was in a whole new (nether)world. Suddenly, I had Netherborn Phalanx decks coming out of my ears. I ended up building some cool decks, although my cochlea is still a little sore.

Another card that took me a while to get excited about was Champions of Kamigawa's Reweave. It wasn't until Kurt Dresner wrote in to tell me how he'd been using the card to turn Hatching Plans into Debtors' Knells that I really started to see the deckbuilding possibilities that Reweave enabled. Pretty soon I was Reweaving everything I could get my hands on. Following in Kurt's footsteps, I started turning Hatching Plans into Debtors' Knell or Form of the Dragon, then Baku Altar tokens into Djinn Illuminatus.

Sometimes I like to play games on Magic Online with my own, non-god account (anonymity is fun!), and after writing that article, I picked up a playset of both Baku Altar and Reweave. Since then, I've built Arcane-heavy decks that have used Reweave as an instant-speed, end-of-turn Natural Order for a number of high-priced creatures. One hit from a Mindleech Mass can be devastating under any circumstances, but it's even more so when you're using the Arcane bounce spells like Eye of Nowhere and Consuming Vortex to fill up your opponent's hand. I've also Reweaved up Szadek, Lord of Secrets in a U/B Splice-heavy deck with Dampen Thoughts to complement the Vampire's milling. Most recently, I've been turning colourless Spirit tokens into Dissension's Tidespout Tyrant, a creature that, like Djinn Illuminatus, will probably win you the game if you can untap with it in play. An end-of-turn Reweave can make this a much more likely proposition.

Reweave is also a decent card when used defensively. At Pro Tour--Philadelphia, Tsuyoshi Fujita memorably wrathed Frank Karsten's board when he Reweaved a Samurai of the Pale Curtain into a second copy of Eight-and-a-Half-Tails. I've pulled off something similar against a number of Honden decks.

I've built decks using just about every “reject rare” from Guildpact, including the sub-spectacular Giant Solifuge. One card that I wasn't too excited about until recently is Sanguine Praetor. Sanguine is a word that means “cheerfully optimistic” or even “Pollyannaish,” but it can also mean “bloody.” I guess the moral of the story is, “When life gives you lemons, murder them.”

It is by no means an efficient card (see: Kagemaro, First to Suffer), but there are a couple ways to maximize the utility of Sanguine Praetor:

Conveniently, Ravnica's Dredge creatures allow you to do both of these things with ease. Golgari Thug, Stinkweed Imp, Greater Mossdog, and Grave-Shell Scarab cover the two-slot to the five-slot. Opposing one-drops can oftentimes be dealt with using Darkblast. Since Sanguine Praetor costs you eight mana, you're either going to need to make a lot of mana (paging Elder and Reach!) or find a way to cheat the Avatar into play (paging Vigor Mortis!). Life from the Loam can facilitate either plan of action, putting Praetors in the graveyard in order to be reanimated or getting you the lands you'll need to hardcast them later on. 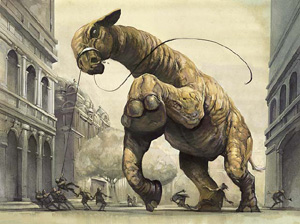 Greater Mossdog isn't really great, but it's the only Dredge creature at four-mana. Savra, Queen of the Golgari was my original four-drop, but she needed a bit more deck support than I was willing to give her (Shambling Shell over Stinkweed Imp, say). On top of that, her “Grave Pact”-ability doesn't interact all that well with Sanguine Praetor. If, for example, you have both cards in play and you sacrifice a Stinkweed Imp to the Praetor, Savra's ability will trigger and your opponent can just sacrifice the three-mana creature he or she was going to lose to the Praetor anyway. Of course, Savra allowed you to get rid of opposing creatures if you didn't have one with the same converted mana cost, but I decided to cut her anyway because the whole point of the deck is to make good use out of Sanguine Praetor. Indrik Stomphowler, Necroplasm, and Greater Mossdog were the replacements. The Beast is much needed utility, and while it can't be Dredged back, you can reanimate it with Vigor Mortis or put in top of your library when Golgari Thug hits the bin. The Ooze, meanwhile, gives you answer to token-heavy decks, a situation where Sanguine Praetor isn't that great.

If you wanted to dip into the Extended card pool, I'd certainly add Brawn and/or Filth to give your bigger creatures some evasion (cut Greater Mossdog) and the other card I'd put in is Genesis. The latter seems particularly beneficial, making it much easier and more tempting to play with a greater number of non-Dredge creatures.

The second mechanic that I thought would work well with Sanguine Praetor was Soulshift. This deck wasn't quite as successful, although some of that was probably due play errors on my part. In one game, for example, I was getting swarmed by tokens and missed the fact that I could animate and sacrifice Svogthos, the Restless Tomb. The deck is pretty straightforward, with Spirits in the one-through-six slots and the Hana Kami-Soulless Revival engine to help to ensure that you have the right creature at the right time. For anyone interested in going down this path, here's where I ended up:

Now, I'm not sure who Roger is, but I have a sneaking suspicion that he'd enjoy the next deck. Before I get into the (Brazil) nuts and bolts of the deck, I'd like to take a second to go over one of the more zany chapters of Magic's Comprehensive Rules. Check this out:

503.2. When copying an object, the copy acquires the copiable values of the original object's characteristics (name, mana cost, color, type, supertype, subtype, expansion symbol, rules text, power, and toughness) and, for an object on the stack, choices made when playing it (mode, targets, the value of X, whether a kicker cost was paid, how it will affect multiple targets, and so on).

The important thing to note is that one of the “copiable values” is the mana cost.

The reason I bring this up is because Sanguine Praetor's creature-sweeping ability keys off of converted mana cost, so it occurred to me that instead of playing with creatures at each point in the mana curve, I could just play with Clone and Sakashima the Impostor. Now no matter what your opponent plays, you can destroy it with Sanguine Praetor! (Indestructible creatures not included.)

Sakashima is one of my favourite cards from Saviors of Kamigawa, and it works very well here. While Clone just kills Legendary creatures (crazy Legend Rule!), Sakashima allows you to clone other Legends while always remaining true to herself (Himself? Oh no, not again!). The Human Rogue will always be a Legendary Creature, which can be useful at times. In one game, I Sakashima'd my Sanguine Praetor on a stale-mated board, and then used Shizo, Death's Storehouse to give the Sakashima/Praetor Fear. I won the game a few turns later.

Thought Courier and Stinkweed Imp facilitate the reanimation aspect of the deck, but they also give you two- and three-mana creatures to sacrifice to Sanguine Praetor. Clutch of the Undercity is able to Transmute for several key cards, including both Clone and Sakashima, as well as Zombify. There's also a small toolbox of cards to Transmute for, most notably Nightmare Void and Mimeofacture (which allows you to potentially “clone” several creatures at once). Dimir House Guard would seem like the better option, since it Transmutes for the same cards and is also a four-drop creature for Praetor purposes, but I found that Clutch was about a million times more useful and gave the deck an answer to problem non-creature permanents like Pithing Needle or Faith's Fetters.

Originally, the Fellwar Stones were Dimir Signets, but I found that the mana-fixing wasn't necessary and that the Stones were great when I Cloned something with an activated ability (like a Selesnya Guildmage).

4 Clutch of the Undercity 1 Debtors' Knell 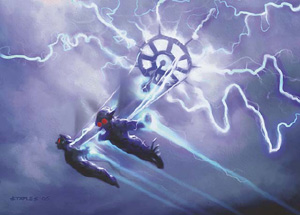 In one game against a U/R Wee Dragonauts deck, I managed to get a quick Sanguine Praetor via Zombify and proceeded to lock up the game by sacrificing and recurring Stinkweed Imp while beating down with my 7/5. Unfortunately for him, all of his creatures cost three mana, including those Wee Dragonauts and a set of Gelectrodes.

I had a bit more of a problem against what seemed like an endless string of creatureless U/R Ire of Kaminari decks. Clone and Sakashima aren't particularly useful here, Stinkweed Imp isn't much of “clock,” and Remand just delayed the inevitable. It was this matchup that prompted me to add Nightmare Void, which can break up the Splice engine and buy you some time to Zombify a Praetor.

One thing you may have noticed about Sanguine Praetor is that its creature-type is Avatar. There are currently five Standard-legal Avatars (enough for Standard Tribal Wars), while a sixth (Coldsnap's Herald of Leshrac) will soon be available. If you're looking for some Tribal action, Jay Moldenhauer-Salazar is going to be featuring Avatars in an upcoming article at Starcitygames.com. I got a sneak-peek at the decklist, and it's almost exactly what I would have built, so check it out!

Until next time, may your bones clatter in the wind!