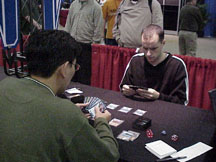 The "eh"s were flying as these two Canadians at 3-1-1 asked Mark Rosewater to verify that the pairings were correct before being forced to attack each other to the death and a guaranteed day 2. Lau mulliganed on a no land draw (with 3 land on top of his deck causing a howl of anguish), then repeated the process, sparing himself the pain of looking ahead. Radonjic decided to mulligan as well "just to be fair," but only once.

Both players were playing near-identical blue/green counter-oath decks they developed together, and while both played blue and green lands, the story of the early game was Radonjic having a wasteland for Lau's Thawing Glaciers, while Lau couldn't stop Radonjic's Thawing, prompting Pete to say "If you concede now there's plenty of time for game 2 and game 3." It being only turn 5, Terry decided to stick it out.

Not that it availed him, since Radonjic's large land advantage allowed him to play a Trade Routes, then a Sylvan Library on consecutive turns, which prompted Lau to look at his hand intently, then ask Tommi Hovi and Kai Budde playing at the next table "You guys DONE?!" The following turn, Pete used Sylvan to find a wasteland for Lau's Treetop Village that had just started its assault, and Lau conceded.

Radonjic told onlookers "It's a Canadian conspiracy to pair us up," between games posing the question "BY Canadians, or ABOUT Canadians? Or both?" This game was determined by Wastelands -- namely, the four Lau drew and played in the first five turns. Radonjic helped out matters by wasting Lau's only colored source of mana, a Tropical Island. When Lau cast a Phyrexian Furnace in an attempt to cantrip through to more cards, Radonjic Force of Willed it and countered Lau's Force of Will, offering to buy him dinner instead. The next turn, Radonjic played a Trade Routes, then a Treetop Village. Once the Bobtown went on the attack, Lau conceded the match.