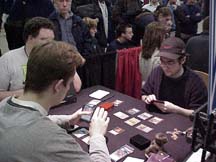 Round 12 saw a matchup between American Bob Maher, Jr. and England's Tony Dobson. Maher was playing a Blue/White/Green Oath of Druids variant, while Dobson was playing the Necropotence-Fruity Pebbles deck, "Cocoa Pebbles."

Game one opened with Maher playing a Treetop Village, and Dobson playing a Peat Bog. On Dobson's second turn, he came out with a Goblin Bombardment, then cast Demonic Consultation to get a Necropotence. Maher's Brainstorm couldn't net him a counter to stop it, so on his upkeep he Enlightened Tutored for an Aura of Silence, very strong against the Cocoa Pebbles enchantment-based engine. Maher then wasted Dobson's Peat Bog to deny him mana and give himself time to play the Aura the following turn. Unfortunately for him, Dobson Duressed the Aura out of his hand, then played another Peat Bog. Maher had no answer when Dobson played and sacrificed an Academy Rector for Enduring Renewal the next turn as well as a Phyrexian Walker to complete the loop.

Dobson, playing second in game two, managed a first turn Dark Ritual, Necropotence, again with Maher's Brainstorm not finding a Force of Will. Maher did play a Wasteland on Dobson's first land the next turn to slow him down as well as a Phyrexian Furnace. Over the next few turns, Dobson Necroed very agressively as Maher played down lands, getting down a Shield Sphere and a Duress to take Maher's Brainstorm over either of his two Counterspells. Maher then Enlightened Tutored for his Ivory Mask, which would leave Dobson's engine unable to damage him until removed, but ended up pitching it to buy back a Forbid he cast on Dobson's Enduring Renewal, after he had gotten the other components in play. Dobson Necroed down to 1, then Auraed away his own Necro to avoid Necrolock, but Maher Impulsed his way to a Swords to Plowshares, removed Dobson's only creature, a Shield Sphere, and send his Bobtown, Treetop Village, in for the final point of damage.

Maher mulliganed once, but even his second hand couldn't stop Dobson from playing first turn Dark Ritual - Necropotence again. Once again, Dobson necroed agressively, 13 cards in turns one to three, but a Duress showed two Maher counters as well as Compost and an Enlightened Tutor. Maher used the tutor to grab Aura of "I kill Pebbles" Silence and play it on turn three. On Dobson's next turn, Maher Force of Willed Dobson's Academy Rector, which could have been sacrificed to a Goblin Bombardment. Dobson Necroed to 1 life, and with no way out of Necrolock, and lacking any way to his victory path, he conceded. Maher stated that his opponents had played a first turn Necropotence on him 4 times today, all of those games Maher won.