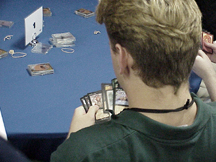 Going into the final draft Brian Selden was in 7th place at 8-2-1. He was feeding Christer Ljones, who was 4th at 9-2 (the only 9-2, oddly enough). At their previous tables, Selden had drafted green/red while Ljones drafted green/black. Selden's first pack had Cateran Overlord, War cadence, Rishadan Commander, Groundskeeper, and Nightwind Glider. Selden went for the Overlord. I talked to him before the draft and he explained how blue and white seem to be overdrafted and thus anyone who drafts it winds up with a weak deck. Ljones (on his left) also took a first pick black card -- he drafted Snuff Out over Snorting Gahr. When Selden's opening pack got passed to Christer, Christer demonstrated the same callousness toward white that Selden did. He passed on both the Glider and the Commander, instead putting Groundskeeper into his pile. Selden, meanwhile, took Cateran Brute in an effort to cut off black and prevent his neighbor from fighting him for it, which is in fact exactly what Christer was thinking about doing.

Selden's 3rd pack had 3 great green cards and a Steadfast Guard. Brian decided on Silverglade elemental instead of Giant caterpillar or Spidersilk Armor. Most of the pros I've talked to feel Spidersilk Armor is the best green common so I was surprised as Selden's choice. When Ljones received this pack he gladly drafted the Armor to follow up on his Groundskeeper thought. For the rest of the pack, Selden always took the best green or black card. His picks were Silverglade Pathfinder, Scandalmonger, Vine Trellis, Tiger Claws, Crackdown, and Cateran Persuader. Ljones, meanwhile, seemed to have a lot of trouble deciding what to do. He started dabbling in blue with an Outrigger and a Balloon peddler, but also took a number of mediocre green picks (like 6th pick Tranquility). Tranquility is useful, but it shouldn't be your 6th overall pick. Selden did succeed in getting Ljones to abandon his first pick Snuff Out, but Selden did not succeed in driving Ljones out of green. Interestingly, neither player seemed the least bit interested in drafting white -- the supposedly best color.

Selden opened a pretty good second pack: Warmonger, Ramosian Sergeant, Thermal Glider, Tiger Claws, Shock Troops, and Sever Soul. Given what Brian had already drafted, Sever Soul was the obvious choice. Christer had problems, though. He opened a pack with Cinder Elemental as the only decent card. He had no red, but he also had no choice but to take it. Selden got a Highway Robber out of that pack. Christer's second pick was a decision between Thunderclap, Spidersilk Armor, Afterlife, Counterspell, and Ramosian Lieutenant. He could take Thunderclap and go into red now that he "got stuck" with a Cinder Elemental. He could also switch into white since it's good here and he has reason to expect white to get passed to him in the third pack (since it did in the first). However, he still hadn't figured out that Selden would deny him all the green in pack 3 and so he went with Spidersilk Armor. Selden also declined the temptation to switch into white and so he took thunderclap. Meanwhile Ljones drafted an Invigorate.

Selden stuck to his two colors from here on, drafting Deepwood ghoul (over Blockade Runner), Undertaker, Lumbering Satyr (over Dehydration), Deepwood Ghoul again (this time over Wall of Distortion), Venomous Dragonfly (over Wild Jhovall and tranquility), Ancestral Mask, and Unmask (passing a 12th pick Afterlife to Brock Parker). Brock Parker got really hooked up in pack 2 if he's drafting white. Christer spent the rest of pack 2 sucking down green cards and blue cards.

When Selden opened his third pack he saw Squallmonger staring back at him (along with Waterfront Bouncer). Christer had to choose from Vendetta, Cinder Elemental, and Nightwind Glider. Christer had no good green or blue cards to choose from so he took another Cinder Elemental. He then gladly took the Bouncer that got passed to him along with some other good late blue cards (like 6th pick Rishadan Airship). Christer did seem to figure out after pack 1 that he could expect good looks at blue in pack 3, and he got them. Ljones could have drafted the crazy-good blue/white deck if he'd switched into white after Selden passed him that first pack (the one with a Glider, a Commander, and a Groundskeeper). Collectively, their two decks would have been a lot better if he had, but of course it's easy for me to say that in hindsight. Selden can't have been happy about his 2nd pick Misshapen Fiend or 3rd pick Highway Robber. With his 4th pick he took Natural Affinity over Deepwood Drummer, a pick that surprised me and might have been influenced by his lack of familiarity with all the rares. (On the other hand, Natural Affinity may be better than I think it is.) Ljones wasn't complaining -- that Drummer should be good with the two Groundskeepers he wound up with. Selden finally got some good green cards with his 5th-7th picks: Collective Unconscious, Giant Caterpillar, and Horned Troll. The 7th pick Horned Troll pack must have been amazing because it still also had Ogre taskmaster, Reverent mantra, and an Arrest. Ljones took the Taskmaster and seems quite likely to splash red. Trevor Blackwell was in the lucky seat that got all the white Selden and Ljones didn't want during packs 1 and 3. 9th pick Arrest can't have hurt his deck.

All in all it was certainly interesting to watch how Brian's and Christer's assumptions and strategies played out. I doubt either one of them is delighted with his deck, but they are both good enough players that neither one of them eliminated themselves from the Top 8 yet either. The next three rounds should be interesting.