Two pro tour winners playing in the final round of the Swiss with Top 8 on the line. Who could ask for more than that? Mike Long sat down with a G/W deck that splashed a little black and included 6, count them, 6 Howling Wolves. Darwin had a fairly standard blue/white deck with a decent rebel engine and a healthy dose of control.

Long's face when he sat down was pure determination and concentration. There was no joking around this round. While shuffling before time began Long asked Darwin if Darwin would please pile shuffle his deck. Darwin said "Sure, Mike but I already did several time." Mike said "Oh, ok, if you already have then never mind." "It's no problem, Mike." Mike continued "It's just better to pile shuffle before time begins in 50 minute rounds." Mike stopped speaking just as the round began, placed his deck on the table and quickly cut Darwin's deck. Darwin fully intended to shuffle Mike's deck (despite not shuffling anyone else's deck all weekend) because rumors were flying that Long was doing some shady shuffling. But Mike's banter distracted him enough that he forgot and just cut the deck. Darwin was kicking himself about this later.

There's actually a fair amount of history to the Long/Kastle matchup. Darwin still accuses Long of stalling him out of a match here in LA two years ago. In addition, Mike's antics were so frustrating to Darwin when they met in the semi-finals of pro Tour Paris that the judges had to give Darwin a verbal warning when he exploded and told Mike to shut up.

The only time Darwin has ever beaten Mike was at last year's Invitational -- an event Mike went on to win anyway. In addition, Long has never lost a match when the Top 8 of a major event was on the line.

Game 1 was pretty quick. Darwin played Charm Peddler, fresh Volunteers, and Ramosian Captain on the first 3 turns and then Disenchanted Long's Story Circle (that had been set to white). Long played a Silverglade Elemental to finally get Forest #2, but Darwin Muzzled it and kept serving with his Rebels and gating out more. Long dropped a Howling Wolf and got three more, but he died to a rebel swarm before he could get the Wolves onto the table.

After the players presented their decks to each other before game 2, head judge Dan Gray confiscated Mike's deck. After looking through Mike's deck, Dan Gray asked to see Mike in private. A 45-minute delay ensued; the result of which was that Mike was given a warning for having a poor shuffling technique. Apparently, Mike's method of pile shuffling doesn't actually randomize a deck. Mike disavowed any knowledge of this fact and was told to change his shuffling style so that his deck would actually get randomized. 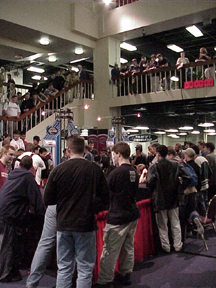 They had a big crowd for game 1, but that was nothing compared to the size of the crowd when game 2 finally started. Players were watching from all three levels of the boat. Game 2 was a pure race. Darwin was attacking with charmed Griffin while Long threw Tiger Claws on top of a Horned Troll so he could keep up on damage. Darwin counterspelled Mike's first Howling Wold, but that meant Mike was able to get out a Snorting Gahr that tilted the race in Long's favor. When Mike then drew a second howling Wolf there was no way for Darwin to control the board. He could knock Mike to 3, but Mike was able to swarm Darwin and force Game 3.

Before Game 3 Mike requested an extra land -- a Forest. For some reason, mike decided to sideboard out the third color that he had been playing with to this point in the draft. When Mike played a turn 4 Howling Wolf, Darwin had Counterspell in his hand, but only 1 Island amongst his 4 lands. Darwin's Turn 5 Pious Warrior made it hard for Mike to attack, but after playing 4 Wolves (and getting two more into his hand), Mike said "I'll try to play Arrest on him", placed a Muzzle on Darwin's Pious Warrior, and quickly tapped 3 Wolves as attackers. The table judge immediately pointed out that the card in play was actually a Muzzle. Mike apologized and continued with his attack phase. Darwin blocked and Disenchanted the Muzzle. Mike used Charm Peddler to keep his Wolf alive. When Wolf #6 hit the table, the crowd once again started screaming "ah-roo." Darwin put Inviolability on his darting merfolk and said done. Mike then cast an actual Arrest on the Pious Warrior. Darwin had up two blue and had Counterspell in hand, but he sighed and said OK. When Mike attacked with his pack of wolves, Darwin used Cho-Manno's Blessing to make his Warrior pro-white so the Arrest would fall off and he could block. Long continued Peddling to save his Wolf.

Darwin finally did use that Counterspell on a Snorting Gahr and then played a Puffer Extract of his own. Suddenly, the Cloud Sprite that had been pecking away at Long's life total looked significantly more threatening, but Mike was still at 14 and Darwin only had 8 lands. On Mike's turn, he dropped Noble Purpose and a buzz went through the crowd. When Darwin used a Disenchant to destroy it some people in the crowd actually booed. Mike's Howling Wolves won over the crowd! Next turn Mike attacked with all his Wolves and put Tiger Claws on the one being blocked by the Pious Warrior. Darwin had to use Puffer Extract so it wouldn't die in combat (and so it would take the Wolf down with it), but now the Warrior was gone. Long no longer had to discard cards to the Peddler when he attacked and Darwin no longer gained any life. One turn later and with Darwin at 6, the remaining 4 Wolves served and Darwin could only block one of them.

Mike Long advances to his 4th Top 8, and his second consecutive Top 8 on the boat. Darwin missed the Top 8 on tiebreakers and many in the crowd felt Mike's poor shuffling deserved at least a game loss, which would have advanced Darwin to tomorrow instead of Mike.