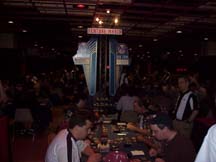 Game one of the Chapin-Pikula match took a bad turn for the Dinosaurs when Pikula played the potentially very large Thran Golem. Meanwhile, Frayman was taking control of his game with a Goblin Raider that had two Blanchwood Armors on it. Forsythe lost all his creatures while blocking, and eventually ran out of cannon fodder, losing game one.

In the Pikula-Chapin game, things were at a standstill until Pikula used Enchantment Alteration to take Chapin's Serra's Embrace and put it on the Thran Golem, making it easily the biggest creature in the game. Chapin played a Pestilence, hoping to stop the bleeding, but Pikula had another Serra's Embrace of his own to give him enough flying creature damage to kill Chapin and take a 1-0 lead in games.

In the third match, Taylor was deep into his deck, thanks to Archivist. After a Congregate (taking him up to 23 life), he Cleared a Katz Pestilence, and was forced to Power Sink another Pestilence on the next turn. Eventually, the Archivist found Taylor's Morphling, which (along with a Hermetic Study on a Horseshoe Crab) quickly finished Katz off.

At this point, each of the matches had finished game 1, and Electric Boogaloo was leading, 2-1.

Pikula continued his dominance of Chapin with a Herald of Serra and a Sanctum Custodian with Hermetic Study. Nothing Chapin could do slowed Pikula down, as the Despondency got Cleared off the Herald and Chapin's Serra's Embrace was Annuled. Pikula finally got his own Serra's Embrace onto the Custodian and won his match, 2-0.

In the Taylor-Katz Game 2, Taylor had a Thornwind Faeries and a Fog Bank out. Katz misplayed, putting out a Phyrexian Denouncer which was immediately killed. In an attempt to gain some life, Katz tried to Corrupt the Fog Bank, but Taylor Snapped it back to his hand. Eventually, Taylor's cry of "Oh yeah! This is excellent! This guy!" signalled that the Morphling was back, and Katz soon died. Meanwhile, Forsythe had tied his match with Frayman.

In the critical game 3, Frayman had a Gang of Elk and a Simian Grunts facing a Goblin Spelunker, Weatherseed Elf, Multani's Acolyte and Acridian. His life stood at 13 while Forsythe's was 10. Frayman held a Falter, and only needed to draw a Rancor or anything else that would provide two extra damage for the win.

For the next five turns, Frayman drew nothing useful as Forsythe put out an Albino Troll and replaced his creatures that died when they blocked the Gang of Elk. Frayman fell to zero life with the Falter still in his hand, as Forsythe's Forestwalking creatures were too much for him.