Tongo Nation is not following the standard Black, Blue-White, Red-Green breakdown followed by most of the teams. 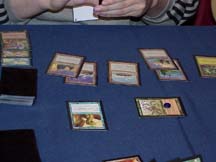 Mike Schneider has just cast a Hunting Moa, planning on putting it's comes-into-play +1/+1 counter on itself. In response to the counter being put on the stack, Marc Hernandez destroyed the Moa with a Heat Ray. The end result was that the Moa's leaving-play +1/+1 counter ended up on Schneider's Plated Spider, now the biggest creature on the board. 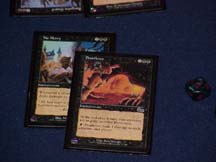 Michael Sochon's Pestilence and No Mercy provide a solid block to Mike Long's development in game one. 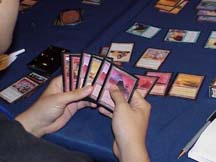 The only thing Justin Gary had going for him in game one was that he drew both of his Finishers. Unfortunately, he never got to use them and went down, 1 game to 0.. 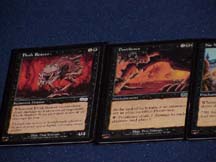 Sochon's Pestilence is not as useful as it could be, since his Flesh Reaver makes him take twice as much damage as his opponent. This slowed Sochon enough so that Long could kill him with a Corrupt. Long 1 -Sochon 0 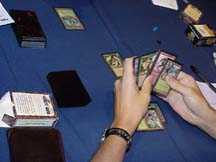 After winning game one, Hernandez took a quick lead in game two with a second-turn Albino Troll. 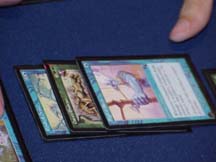 Brian Schneider wins the game and the match with a Peregrine Drake enchanted by Gaea's Embrace and Sigil of Sleep. At this point, Tongo Nation led, 1-0 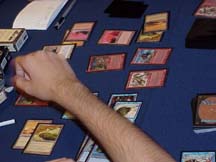 Faced with a Raphael Levy's Horseshoe Crab/Hermetic Study, Justin Gary attacks with everything. It ended with Gary losing most of his creatures. 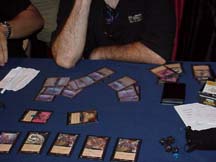 Mike Long has just Corrupted for ten, putting him at 21 and Sochon at 2. Long lost anyway. 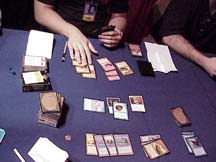 Raphael Levy had complete control of the board and eventually won.