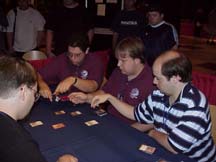 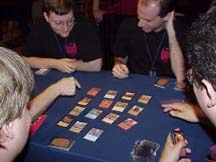 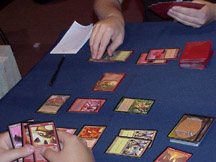 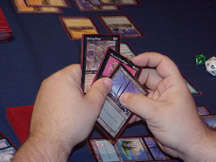 In the second seat, Randy Beuhler started with a Raven Familiar and two Snaps, allowing him to repeatedly improve his cards. Here, Randy decides whether he'd prefer creatures or land. 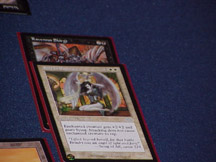 Mike Turian won his game once he was able to put his Shiv's Embrace out and attack. He led his match 1-0 at this point. Randy Beuhler also led 1-0 after putting a Twisted Experiment on his Raven Familiar.

The Kastle-Lauer match took longer, as Kastle was able to trade creatures, killing Lauer's Skirge and getting nine pointss of damage in with the Vebulid. Darwin would eventually win, being the only member of Team Your Move Games to take the first game of his match. 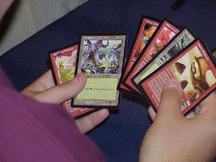 In game two, Mike Turian held so much direct damage to being the game that it almost didn't matter what Rob Dougherty drew. Dougherty had to take a mulligan, making it almost academic. Meanwhile, Randy Buehler also mulliganed, holding a hand with five land and two Snaps. 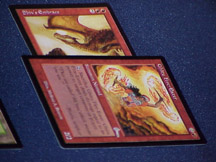 Turian soon had a Shiv's Embrace on his Ghitu Fire-Eater, which would allow him to pump up the creature's power with the Embrace and then deal that damage directly to Dougherty. Turian won his match, 2-0. 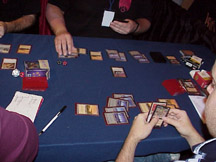 Darwin Kastle's Mishra's Helix controlled the game for awhile until Lauer was able to sneak out a Reliquary Monk and get rid of the Helix. Darwin proceeded to win with an impressive array of creatures. 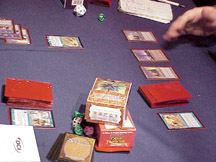 After David Humpherys took advantage of Randy Buehler's poor start in game two, it was down to the third game between the two of them to decide the match between the teams. Randy played a third-turn Thornwind Faeries, only to have it countered by the only Miscalculation in Humphery's deck. On Humphery's turn, he played his own Thornwind Faeries.
Video Clip of Randy Buehler vs. David Humpherys The game was long and complex, with moves and counter-moves by both players. To kill a Buehler Bouncing Beebles (3/4), Humpherys waited until it attacked, pumped it up to 4/5 with his Angelic Page, and played Radiant's Judgement on it. Unfortunately for him, Buehler played Snap, returning the Beebles to his hand, and played them again right away. In the end, Humpherys squeaked out a win in the five extra turns given at the end of timed play. 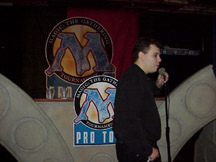