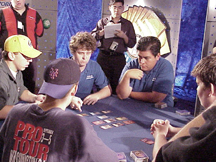 Coming into PTDC, Alan Comer, Kurt Burgner and Brian Selden, who together form Team Game Empire, hadn't had too many opportunities to work on their non-verbal communication techniques, essential for communicating during the Team Rochester Draft format, in which teams may not speak during a draft, but are free to gesture and point.

"We'd each taken a look at the format itself" said Burgner, "but with Brian away at school, we hadn't practiced together too much, so we didn't really have much of a system developed"

Upon arriving in DC, the three PT veterans sat down with Mogg Squad teammates Sigurd Eskeland and Gary Wise, who had recently learned of a simple hand gesture technique developed by Team CMU's Randy Buehler and immediately took it as their own.

While the gestures may seem confusing to spectators, the system is actually quite simple. Using the five fingers on their right hand, the three players decided that each finger would represent a color, with the thumb representing Black and the rest following in alphabetical order.

Using this system, the players were able to identify colors for one another, pointing at any given player with required fingers extended in order to provide information as to what color or colors was being played.

Needing to identify more than colors, there team used a number of different symbols in order to show whether Enchantment removal was needed, they were short on creatures, or when there was thought of splashing a third color.

The most interesting of these signals was that of hate drafting. Deciding that it was obvious when they wouldn't want a card to be played against them, Game Empire employed the cutthroat signal of running a thumb across their neck, accompanied by a closed fist, to suggest that they should be 'killing' certain cards.

"If we didn't have some kind of system going, we'd be lost" said the always entertaining Comer. "This one is pretty simple and it seems to be working, so I don't think we really need to change anything". With Game Empire looking ahead to the finals, Alan may well be right.