Conflux is the second set in the Shards of Alara block. It is a 145 card expansion with randomly inserted premium cards. It will be available in booster packs, intro packs, and fat packs.

Agents of Artifice
A Planeswalker Novel
by Ari Marmell

Jace Beleren, the prodigal son, a powerful telepath whose choices now will forever determine his path as a mage; Liliana Vess, a temptress whose beauty belies a dark secret and even darker associations; and Tezzeret, leader of an interplanar consortium whose quest for knowledge may be undone by his lust for power.

Follow these characters in their quests for knowledge and power. Will Jace's choices lead him astray of the right path? Will Liliana's past finally catch up with her? Will Tezzeret allow hubris to obscure his vision? Find out more on the official Agents of Artifice page.

A powerful and infinitely sinister force is conspiring to reunite the shards of Alara. This reunification will come with a deadly price: sheer chaos, as realities begin to overlap. Thus begins the Conflux.

At its center is a name long feared. A name spoken only in hushed tones. A planeswalker so powerful that he alone can engineer the chaos that has seized the shards. Nicol Bolas has returned, and this elder dragon has placed agents everywhere, fomenting violent destruction.

But to what end? Bolas's ultimate goal is still unknown.

As a player in the midst of this bedlam, you can use basic landcycling and domain to make this anarchy work for you, and focus it on obliterating your opponents. 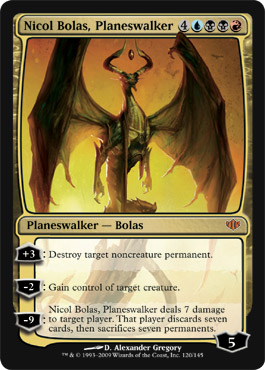