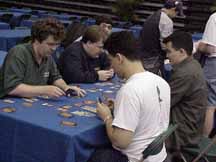 With Meatgrinder #1 starting in the main tournament area, many American Pro Tour regulars began arriving at the tournament site. Everyone wants to take a look at the constructed decks being played in the 'Grinders. And there's no better way to pass time between laps through the 'Grinder tables than by doing 8-man booster drafts.

Dave Price, Alan Comer, Elliot Fung, and Justin Gary were looking for a players to round out a draft. A couple of Florida players who are qualified for nationals jumped in -- Lee Steht and Antonio Derosa. Gary Wise is Canadian, of course, so he's not playing this weekend, but he's here to help out with Sideboard coverage and he joined too. They needed an 8th and I've been known to duel with the magical cards so this article is actually a first person account.

The word on the street is that white and black are both weak in Prophecy. Green has a lot of high quality "fat" while red and blue are solidly aggressive. The addition of Prophecy opens up a lot of interesting booster draft strategies. Since white is so bad in Prophecy (with the exception of Troubled Healer), many drafters are shying away form white in Masques. The idea is that inexperienced drafters may still think that white is amazing and white could easily wind up overdrafted. Masques and Nemesis can support 5 white drafters, but Prophecy can't. If you want to draft black, the best to do it seems to be to cut it off in Masques so the people on your left with pass you all the great Nemesis black. If you can't count on getting hooked up with black in Nemesis, it just isn't worth drafting black. Meanwhile there seem to be a lot more players forcing green than before Prophecy was released. One of the most popular strategies is basically just "pretend you're Mike Turian." Of course, not everyone can do that and still have it work out.

When I opened my first pack there was a Cateran Kidnapper, a Blockade Runner, and not much else. I decided I might try out the "cut off black and get paid off in Nemesis" strategy so I took the Kidnapper and passed the Runner to Alan Comer. Justin Gary passed me a Snuff Out in a pack that had no other good black cards and my strategy was cemented. (I found out after the draft that Justin had just taken a first pick Kyren Negotiations. Gary Wise (sitting on Justin's right and feeding him) also opened a Kyren Negotiations and also passed a Snuff Out down the line. Justin took Snuff Out with his 2nd pick but there was still Maggot Therapy left for me. That left Justin in really bad shape since he was fighting Gary for red and me for black (where I picked before him in the all important Nemesis pack).

I spent the rest of the masques pack making sure not to pass any black down the line. I succeeded and neither Comer or Dave price (two to my left) drafted black. I sent clear signals to Alan saying "go blue" by passing him multiple Blockade Runner and Gushes. However, the blue just kept coming so I dipped into it toward the end of the pack. I hoped that would give me a good color to draft in Prophecy since Justin clearly wasn't blue.

My Nemesis pack had three cards I would have liked to draft: Volrath, Ensnare, and Seal of Doom. I wasn't convinced I'd play blue so I went with Volrath despite the 3 black mana in his casting cost. What then happened was, according to all observers, an aberration. I never got passed any good black Nemesis cards. Oh well, that happens sometimes. Justin, of course, got even slimmer pickings since I was sifting him. Prophecy helped me out with some solid creatures and a 2nd pick Avatar of Will. My deck turned out good, but with a very top-heavy mana curve and lots of heavy demands on my colored mana supply. I knew I was rolling the dice to some extend with Counterspell, Withdraw, and Volrath all in the same deck, but those were the cards I ended up with so that was my plan.

I played Justin Gary in the first round. He knew his deck was weak and once he found out what Gary and I were drafting it made much more sense to him.

He did win game 1 with a Panic Attack that I didn't see coming, but I won games 2 and 3 without too much trouble. Round 2 was against Elliot Fung -- a buddy of mine from Pittsburgh who won the Ohio Valley Regionals with a Rebel deck called "Bear, Go." Elliot was the only person at the table who drafted white (!) but his deck still wasn't great. Despite getting a 4th pick Blinding Angel, he came up a couple of cards short. Elliot did survive his round one match-up against the guy with Massacre in his deck, but he ran into trouble against me. He got out Blinding Angel in both of the first two games, but when he tapped out for it in game one I used Withdraw to bounce it and another creature, thus buying myself enough time to swarm him. In game 2 he hit me with the Angel 5 times 9and thus prevented Volrath from killing him) but once I got land #8 so I could play Avatar of Will, that was the end of Blinding Angel.

The finals was me against Gary Wise. At a table with 6 US Nationals competitors, the other two guys met in the finals. I played a turn 2 Rootwater Thief, but I was not happy when I looked through Gary's deck and saw that Kyren Negotiations wasn't there. That meant it was in his hand and that meant I was in trouble. In game two my early Mike Long did remove Kyren Negotiations from his deck, and then Seahunter (he had 2 Jolting Merfolks and a Blockade Runner!). When my Wandering Eye showed Gary that my hand was good and his was a bunch of land, he just scooped. Mostly, he knew there'd be another draft starting as soon as we were done so he wanted to finish quickly.

Game three was really close. Wandering Eye revealed that I had both Avatar of Will and Volrath in my hand. The problem was I only had 6 mana total and only 2 of them were Swamps. Gary had a Rethink in hand, but he tapped out for 3 consecutive turns in order to play creatures and fire up his Kyren Negotiations. We both knew that if I could draw Swamp he'd be in a lot of trouble, I didn't. And then he drew a 7th land so he could play Jolting Merfolk while still leaving Rethink mana untapped. That was the end of me. Gary then joined the next draft and I left to write this article. I think I made a mistake by only playing 17 land. Between the Rhystic spells and the land-sacrifice spells, it makes sense to play 18 land in any limited environment that includes Prophecy. Since I had expensive creatures in addition, I certainly should have run 18 land.

Stay tuned for more coverage of *everything* going on here at US Nationals.