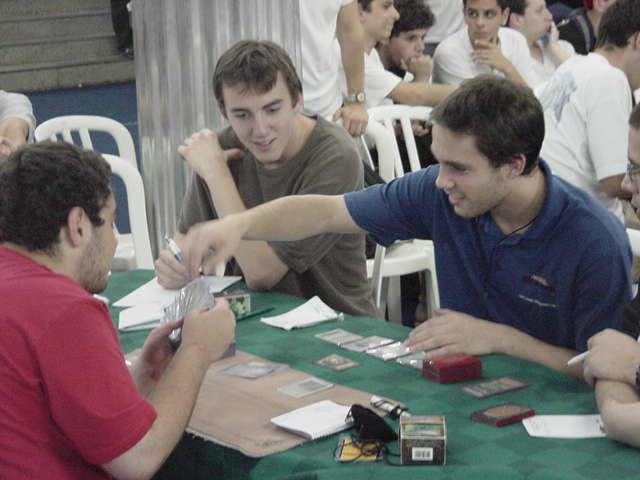 "The double GP Winner against the unknown local guy," might think some people as they are reading the report of this match. "It should not be too difficult for the Frenchman". But for several reasons they are totally wrong. First at all, Antoine Ruel is more considered as a Limited specialist, and José Mangueira is not an amateur and he deserves to be in the Top 8 for the very good results he obtained all the week end long with his original Living Death deck. Then, the match up seems pretty time and it is obvious before the Quarter Finals begin which one is going to be the longest.

"Oh, you're from Sao Paulo ! Is it your favorite team ? Because I've seen them at the stadium last Wednesday, and they really get destroyed !". Whoa, trash talking before the game, is it any surprise this guy's French?

José wins the toss and is happy with is first hand, contrary to Antoine who does not want to take any risk with a one land hand, even if it has Brainstorm and Impulse.

The first spell played in the game is a Yavimaya's Elder that Antoine immediately removes from the game with a Swords to Plowshares, before playing on his turn a Call of the Herd. Another Elder reached the table, but contrary to his twin he was sacrificed for two lands and a card, which helped the Brazilian to stop Ruel's savage beatdown as he played a Spike Feeder and a Treetop Village on the turn after. At this time Antoine decided to keep his Wasteland and to stop attacking, because he knew how a Dust Bowl would destroy his deck. But he did not have much choice and destroyed the Mishra, after a double Duress removed from his hand all its nonland cards (Wrath + Counter) but a Forbid, a choice that he was about to regret.

The game looked definitely to be in Mangueira's favor as he played Spirit Monger Antoine could not counter. On the Brazilian's following attack phase, Ruel played the Fact or Fiction he had just drew, with the hope to reveal Wrath of God or Swords to Plowshares. He didn't get any, but his opponent made a mistake giving him both Impulse (which Antoine was about to use on the next turn to try and get Wrath of God) and Force of Will (the only spell he could play after playing a hypothetical Wrath). As a punishment for this, Impulse gave Antoine the possibility to raze the table, and the Force countered a Spike Weaver, putting Antoine down two.

Then Antoine took the advantage little by little, because of a topdecked Fact or Fiction, but moreover because of the forbid he had decided to let on his two first duress.

A few turns later the game did definitely turn in his advantage, but the life total difference was important enough for the suspense to remain complete. Indeed, Antoine had to kill or counter almost everything in order not to die.

The French man started to profit from the fact that his opponent had not drawn any of his four Phyrexian furnace. He played his Gaea's Blessing one after the other, and since he did not have many lands left in his library, he started drawing a good card a turn.

When Morphling hit the table, everyone thought the game was over ... everyone but José who played his third and fourth duress followed by his only solution to Morphling : Pernicious deed.

As he was almost back into the game, a big mistake cost the Brazilian the win. Antoine played Fact or Fiction and revealed Swords, Seal, Blessing (the last of the deck) and two Counterspells. He thought Antoine would choose to shuffle his library and put the two Counters with the Blessing. The Frenchman, who needed Counters much and did not want to reshuffle his two Call of the Herd took the stack with the three best cards.
Now the game was over : Antoine had between zero and three cards in his library and he could almost choose each turn what he wanted to draw. What had to happen happened and Morphling came back, more violent than ever, and gave Ruel the game.

Here is what both players boarded in and out :

José probably did not feel like his Uktabi Orangutans were necessary against Antoine's Disks and Kegs. But then why are they in his sideboard?

As the game started, the three other Quarter-Finals were already done. Contrary to Game 1, Antoine did not take one but two mulligans. Ruel's game could be sum up in one sentence : fighting for survival.

The mulligan's card disadvantage was to important for him to try and control the game. After he played a Wrath and Forced a Choke on the next turn (leaving him with nothing but Powder Keg in hand), the only thing he could do was topdeck. After he killed a Plaguelord, he decided to play his Keg : whether José had a monkey, it was the only way to prevent the Yavimaya's Elder beatdown, which eventually stopped when Antoine was at 1.

He did not have anything into play or in his hand when started one of the most amazing series of topdeck I've ever seen :

José : Spiritmonger (reanimated by the Stronghold)
Antoine : Swords to Plowshares

Antoine tried a last FOF but did not reveal the two Wrath of God and Wasteland he would have needed to really come back.

After he saw his opponent's Disks and Kegs, Mangueira decided to board in his Orangutans.

Hopefully no mulligan was took on this game and both players had pretty good draws. José, apparently marked by the way he had lost Game 1 decided to play Duress on Gaea's Blessing on turn one, to remove it with a furnace on turn two, when he could have chosen to remove one of Ruel's two FOF or two Wrath.

After the Frenchman countered a Recurring Nightmare, Mangueira played a Dust Bowl he immediately activated, followed by a second Duress which took one of the FOF out of his opponent's hand. Antoine played the other, and the Brazilian gave him Disk, Call of the Herd and Wasteland (Antoine's only solution to Dust Bowl) for Ruel not to get a third Wrath of God.

He played the disk which was immediately destroyed by the Orangutan only one turn after Spiritmonger came into play. But Ruel's only true threat, the Dust Bowl, was already gone then. After God razed the table, a new battle started, between José's Treetop Villages and Antoine's elephants. But the struggle quickly appeared to be unequal because the elephants were definitely too numerous.

Forbidding every solution until the end, Antoine could swing his elephants for the win.

The Brazilian only regret will probably be not having playtested against Walamies. He seemed lost on each Duress and FOF, which is really damageable because he played pretty well for a rookie at this level.

Antoine Ruel might be the first European player to win a GP out of Europe. He will play in semi-finals against Guilherme Dei Svaldi against which he drew during the swiss rounds.