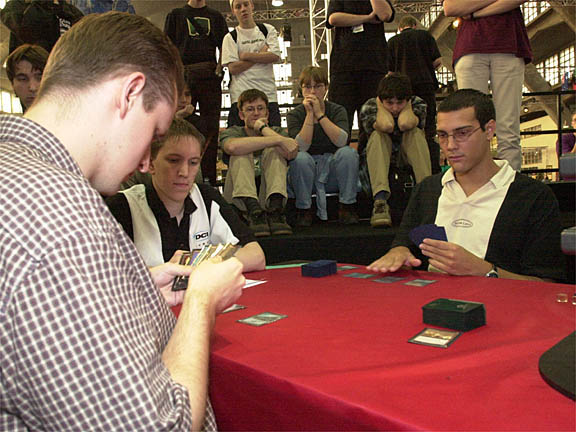 This match-up between Magpie Blue and Tinker was at first glance going to be a long intensive battle. Most people thought Magpie had the match-up advantage and that Bob would have to use his play skill, experience and intangibles to pull it off.

This match-up is all about the first few turns. Bob must try to bust out a threatening artifact before Helmut can set up his mana, and counter the rest of Bob's threats and eventually win with Thieving Magpie.

Bob's dedication and work ethic showed off yesterday. He played 60 playtest games over the course of the day, against solid Pro Tour players like David Williams, Scott Johns, Terry Tsang and Donnie Gallitz. And he developed a non-obvious Sideboard strategy that he found gave him a 60-40 percent win percentage after sideboarding. Bob's testing showed that his winning percentage went up dramatically if Helmut didn't drop early Islands and couldn't Thwart his plans early.

Helmut also playtested most of the day yesterday, and felt confident coming into the match. His plan was to maximize counterspells and try to stop Bob's artifact mana sources and use Rishadan Port and Dust Bowl to nullify Bob's lands to make cards like Stroke of Genius and Mishra's Helix less powerful.

The only thing left to determine is who will play first in Game One. This is a huge advantage in this match-up as Bob wants to drop fast Monolith and Metalworkers before Helmut can counter them. Also playing first is important with Rishadan Ports. Bob won the roll 10 to 8 and looked for a fast hand to win game one.

Bob's starting hand was amazing: 2 Islands, Port, Processor, Tinker, Helix and Metalworker. 3 lands and 4 great threats against Helmut. Bob opened with Island, while Helmut played Conclave. This was huge as Helmut couldn't Daze Bob and could not Thwart at three mana. Helmut played a Port, not an Island and opened the door for Bob's turn 3 Metalworker. Helmut's only hope was Foil, which he didn't have and Bob was pleased. Contrast this sequence to if Helmut had won the roll. Helmut would have had two mana before Bob and could have Ported Bob first. And Helmut could have Miscalc'ed a turn 3 Worker easily.

Instead Helmut had to stare down the Worker. What makes matters worse is that he was Mana screwed and dropped only a Keg. Bob untapped and revealed the following hand: 2 Processors, Colossus, Tangle Wire and Mishra's Helix. This gave Bob 10 colorless mana to cast Colossus, and then Bob tapped two land to Cast Helix. Helmut cycles Miscalculation and plays an Island. Bob casts a Masticore and then uses the Helix to tap Helmut out. Helmut plays an Island and says go and Bob pays 8 life to untap the Colossus and then he attacks for 12 and the win. Bob's 6th turn kill was pretty impressive.

Bob executed his sideboard plan : He took out 3 Masticore, 1 Crumbling Sanctuary, 1 Stroke of Genius and 1 Voltaic Key and put in 4 Miscalculations, Mishra's Helix and Rising Waters. Bob's plan was to maximize early and cheap threats to make attacks on his mana sources hurt less.

In testing it was felt that Treachery was a key card for Helmut, but he boarded one out along with 1 Morphling, 1 Miscalc and 2 Masticores to put in 4 Annul and 1 Temporal Adept. His plan was to maximize cheap counters and then win with his 4 Magpies, 1 Morphling and 2 Conclaves. 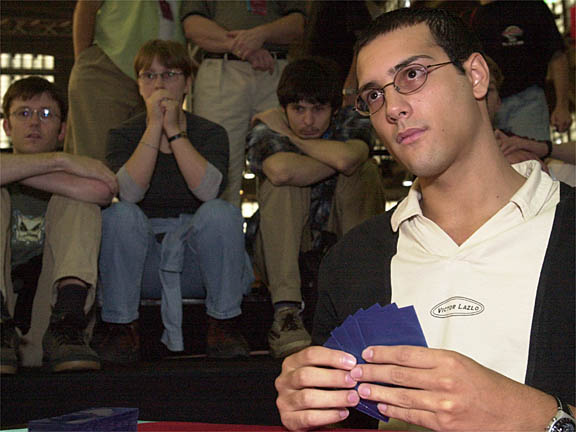 In game 2, Helmut opened with Island and then Conclave, while Bob played Saprazzan Skerry, Island and then Metalworker which Helmut Annulled. Helmut played a 2nd Conclave and then Dazed Bob's Dynamo. Bob had to deplete his Skerry and was stuck at 2 mana, and Helmut's mana control strategy seemed to be working. Helmut then dropped a Port and locked down Bob's Vein. Bob drew a Port and ported Helmut back. Bob then played a Key and ported Helmut again. But Helmut was at 7 mana now and dropped a Magpie with 2 Islands untapped. Bob dropped a Wire that Helmut could have countered but chose not to, to save his counters for other threats. Then Helmut sent the Magpie, drew a card, played a land and said go. Bob was on a serious clock, he needed to try to win soon before the Magpie took the game over and made it unwinnable. Bob had an opening with 4 of Helmut's land tapped and Bob tapped his Key to the Wire. He Tinkered the key, but Helmut countered. This tapped Bob out so Helmut untapped and gained Port advantage. Bob took his turn and said go and Helmut ported his Port at the end of turn. Bob cast Stroke of Genius in response, but Helmut again casts Counterspell. Helmut dropped a Dust Bowl and destroyed the Crystal Vein. Bob tried to top deck but got nothing and said go. Then Helmut used Dust Bowl to destroy the Port. With the Wire depleted, Bob cycled Miscalc to find a threat but couldn't. Helmut played a 2nd Magpie and it looked bleak for Bob. Then Helmut activated the Conclave and repeatedly sent it and both Magpies. Bob couldn't find an answer and conceded.

Game three Bob had to mulligan, but he had a good draw of six. He opened with Skerry, Island, then Monolith. Again Helmut attacked the mana and Annulled the Monolith. Bob dropped a Key and said go. Helmut played Port, Dust Bowl and Keg. Bob dropped a 2nd port but didn't wait. He tapped his Ports to cast Dynamo, but Helmut Foiled it. Helmut Kegged the Key leaving Bob without a Tinker target. Bob dropped a Key and Tinkered it right away, but tapped out to do so and walked into Helmut's Daze. Helmut played a Magpie and Bob tried to cast Processor, but Helmut had the Thwart. Helmut attacked with the Magpie and tried to Tinker a Monolith, but Helmut Dazed it. Bob drew another Port to go with his other two, while Helmut tried to untapped. Bob ported Helmut to tap him down and this opened it up for Bob to drop Helix. But Helmut had Daze #3 to stop him. Next turn, Bob dropped a Wire which was Countered and a Helix which was Foiled. Helmut cast an Adept and started to Dust Bowl Bob again. Bob made a last ditch effort with a Stroke for 3, but all he got was a Processor, which wasn't that useful at 5 life. Bob conceded and it was on to game 3.

I felt Bob could have played the game better. With 3 Ports he should have been able to get spells off and play around Daze. At the end Bob had run Helmut out of counters and if those 3 Dazes weren't useful then Bob might have won. In both post sideboard games, Helmut survived the early game and was able to cast Magpie to win the long game.

Game 4 Bob needed a comeback. Bob started poorly, dropping an Island not a Skerry and when Helmut played a Conclave, Bob knew his turn 2 Metalworker would have resolved. Bob instead played Port and then the Skerry on turn 3 allowing Helmut to play Island and Port and taking the Port Control. Bob played a Metalworker, which Helmut Annulled. Bob was ready with the Miscalc, but Helmut played Foil. Next turn Bob played Key and then Tangle Wire, both which resolved and Helmut was looking to be in a tough spot. Next turn Bob Tinkered the Key, but Helmut Thwarted. The problem was that he had to go down to 2 land, nether of which was an Island and Bob's second Miscalc meant Tinker resolved. He pulled out a Colossus. At 2 land the Wire tapped Helmut out and he had no way out of the Port/Wire lock and lost game 4.

Helmut went to the board and made two changes - he took out the one Treachery and Morphling and brought in a Seal of Removal and a Miscalc. This would leave him with just Magpies and Conclaves to win, but that worked fine in games 2 and 3. Helmut played first and stayed with one land. He did so because of 2 Annul and 2 Daze in hand. But Bob dropped a Port, while Helmut had to discard. Bob tapped the Island, but Helmut drew into Island and Dust Bowl. Bob dropped a Wire, which hits and then Bob got a Metalworker into play. Helmut Seal of Removaled it and when Bob recast it, Helmut first Dazed it and then Foiled it with the Island he returned. This left Helmut with just 2 Annul and an Adept in hand, with the Wire still tapping his land. Bob taking advantage of Helmut tapped out, cast Helix and established the lock. Bob tried to cast a Wire to free his mana up, but Helmut Annulled it. Bob's 3rd wire resolved, freeing his mana up. But Helmut rebuilt his land. Bob searched for a threat, casting Stroke for 2, which Helmut allowed. Then Bob cast Metalworker. Helmut panicked, Thwarting it, and had no Island in play and was tapped out. Bob cast a Processor, paid 10 life and had enough mana to make a creature and lock all of Helmut's land up. Bob won and advanced to the Semis. 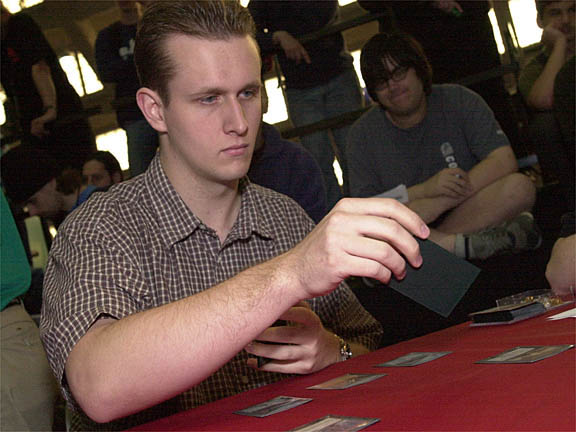 I felt Bob could have played better game 3, and certainly did in games 4 and 5. He was Dazed 3 times in game 3, but not once successfully the rest of the match. Bob proved he could win the long games and didn't need the explosive dumb draws to win. Helmut kept his cool, but definitely shouldn't have Thwarted the Worker. If he didn't then it looked like he might win as Bob was low on threats and Helmut still had Annul and Adept to play. Bob knew he had to get lucky and play well to win and hope that Helmut made an error and that's precisely what happened.