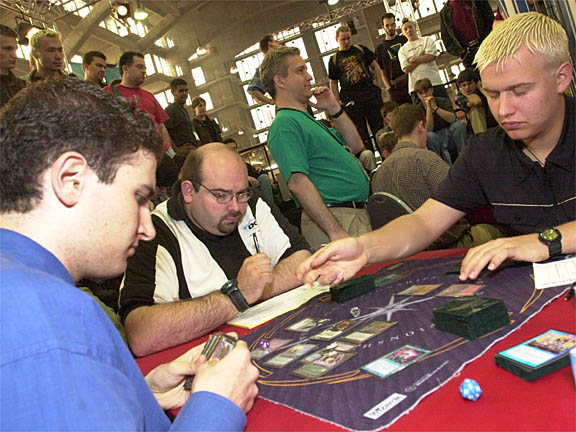 Before the match, Janosch reckoned he had a 30% chance of beating the world's best player in the quarters, but knew that the match up was not a favourable one. Jon thought the overall score would be 3-1 - he was right. Game 1 is definitely in the blue deck's favour, but Kuhn has 3 monkeys, 2 Rack and Ruin and 1 Splinter in his sideboard whereas Jon only really had Miscalculates, which he told me earlier he was not going to side in.

Steve O'Mahoney-Schwartz did the most work on the tinker deck that the Antarctica Team played, and it seems that Bob Maher Jr. managed to slip into the test group too with a decklist only different by 4 cards (instead of 4 Brainstorms he has 3 Strokes and 1 Island). Bob went 4-2 in the swiss, loosing to Accelerator Blue and Replenish, whereas Finkel managed 5-1, again loosing to Replenish. He reckons that the Tinker deck beats Replenish after sideboarding and he might well be right - the match he lost, he had forgotten to de-sideboard, so he was already 0-1 in games when they began. Interestingly though, if Bob and Jon meet in the Finals, the Strokes of Genius might make a deciding difference.

Janosh played a green/red land destruction deck that was pioneered by the European Alliance/Mogg Squad deck that was made when the two teams decided to test standard together before the Worlds. It was, however, by word of mouth, so his decklist was not identical by any means - having Stone Rains and Saproling Bursts in the main. 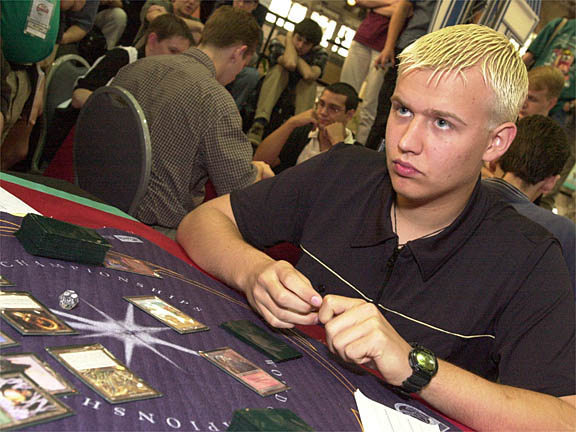 There is no time limit for the final rounds of the Worlds.

Finkel wins the die-roll and decides to play. After a mild Port, war by Jon's fourth turn he has two Keys facing a Bird and an Elf, both players on 3 land. He makes a Tangle Wire which stalls the game for another turn each with only and extra Bird hitting the table, then on his sixth turn he makes a Dynamo, Tangle Wire no.2 and a Masticore. Totally locked now, the German does nothing and can only watch as his opponent attacks with the Masticore (blocked by a Bird), kills all his creatures, then Tinkers for a Processor with 4 mana left untapped (losing 7 life). Still locked by the Tangle Wires he now faces a first then a second 7/7 big guy and concedes.

Jon shuffles into his deck 4 Miscalculates then weeds them out again as a bluff. Janosch takes out 2 Saproiling Burst, 4 Plow Under and 2 Masticore adding 1 Creeping Mould, 1 Processor, 2 Rack and Ruin ,1 Splinter and 3 Uktabis. Neither one of them changed their sideboards from this point onwards.

Janosch keeps a Mountain/Port hand and doesn't draw any more land for the rest if the game. Finkel keeps a fairly weak, but acceptable hand, but draws a Brainstorm on his second turn and squeezes past the port to make Monolith, Key and Processor for 5. The German, having missed his 3rd land drop desperately needs to draw a green source so he can Monkey the Processor before it has a chance to generate, but fails to, and discards. The 5/5s just roll in for the next two turns and Kuhn falls to the screw. 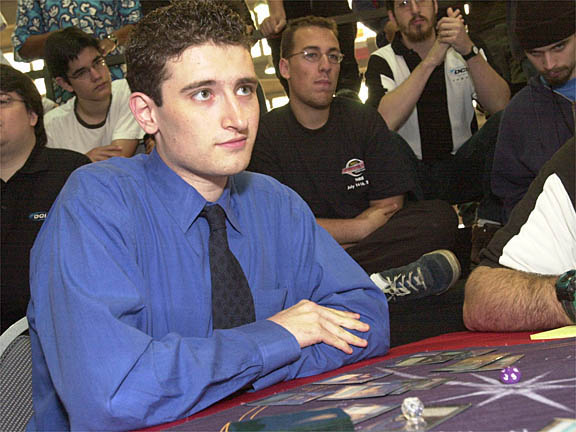 Janosch had no such luck and Mulligans. His second hand is not that great either, so there is a long pause as he deliberates over the double mulligan : 2 Arc Lightnings, Stone Rain, Avalanche Riders, Forest, Mountain. He mulligans.

His five card hand: Elf, Port, Stone Rain*2,Arc Lightning. Again, this is a shocking hand but he has to keep it.