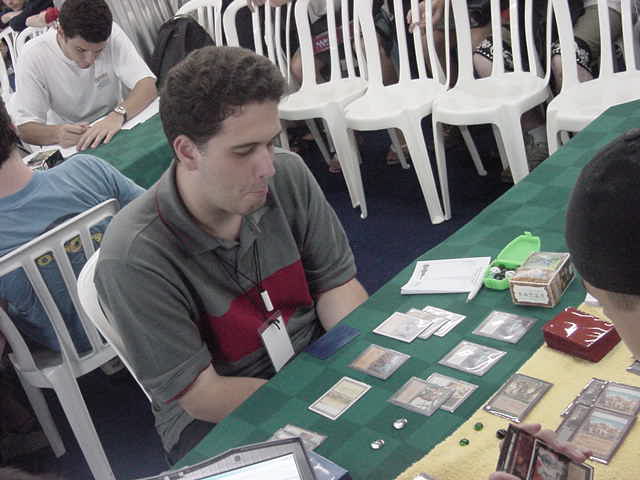 There is nothing like playing a compatriot, in your own country, in the Top 8 to let you work out the pressure. One of these guys will probably be the top money-maker in this tournament since they are both amateur flagged.

The game started of slow with Gunther playing a Cursed Scroll and a Seal Of Cleansing and Leopoldo hard casting a Nether Spirit. When Gunther revealed his hand to Land Grant he had two Call Of The Herds. Sure enough the Spirit stopped swinging and was forced to sit back and stare at the gathering elephants across the table.

Finally Martins found a way to up an effort when he drew a Vampiric Tutor. He thought long and hard about what he should tutor for and settled for an Entomb. He Duressed to take away a possible Sword but found only a Rancor, which he took, and a Wax/Wane. The Entomb brought up a Verdant Force and since Leopoldo had an Exhume he passed the turn instead of Reanimating with the last Swamp.

Raphael got the Spirit out of the way and attacked with the Elephants bringing Leopoldo down to eight. Still the Verdant came into play next turn and any plans of ground attack had to be postponed. The race was now between Wakefield's monster and the two Scrolls - but only five lands - on Gunther's side.

Despite playing at a slow rhythm Martins still missed returning his Nether Spirit from the graveyard. He did however play a Krovikan Horror to turn the tokens into Fanatics (well, close enough anyway).

He agonized over what to do each turn trying to figure out how to win the race and in the end the Krovikan cleared the way for the deadly strike one turn before Gunther could deal the final Scroll hit.

They went to Game 2 like only two Latin players can: discussing who had made the most mistakes in the first game, with both wishing to take the dubious honor. Leopoldo sided in the Perishes, Massacre and Evincar while Gunther brought in Retribution Of The Meek and two Wax/Wanes.

Raphael started with a Mogg Fanatic and a Land Grant but Leopoldo had a much faster start in mind: Entomb for Verdant Force and knowing Gunther's hand from the Land Grant he Reanimate it.

Gunther had a River Boa to stop the Force but there was little he could do in short notice about the rapidly increasing tokens. Not happy with the huge advantage of having a second turn Verdant Force Martins used two Buried Alives to drop another Verdant, Multani, Squee, Avatar and the two Krovikan Horrors into his graveyard.

At this point all Raphael could do, besides casting a second Boa, was show his good sportsmanship racking jokes while Leopoldo sang to his deck begging for another reanimation spell to deal the final blow.

When Leopoldo played the Horror Gunther laugh and shook his hand.