, Earthlings and/or beef and/or mutton! Summer is almost over in my neck of the woods. We're into the infamous “Dog Days of August,” which is fine place to be if you're a dog, I suspect, but it's not so great for human beings. Just below my neck of the woods, somewhere around, say, the collarbone, a cold front has moved in. Some might even call this “front” a “snap,” which is convenient, because Coldsnap (the set, not the snap) is finally available on Magic Online, and not a moment too soon.

Next to Thrumming Stone, the card that has inspired the most reader mail in recent weeks has got to be Haakon, Stromgald Scourge. He's a knight and a zombie. He'll mop the floor with the opposition and top their desserts (probably with the skulls of his enemies). He's the scourge of all of Stromgald, but unlike the scourges of Numai and Minamo, he's a little finicky about how he gets played. A bit of an iconoclast, Haakon blatantly refuses to be played from your hand, and instead insists that he be played only from the graveyard. Once he's there, though, he can perform all kinds of nifty tricks, like balance a beach-ball on his nose and give a helping hand to some of his dead friends.

Most of the mail suggested that Haakon should be paired with Saviors of Kamigawa Reject Rare Extraordinaire, Ashes of the Fallen. If someone had told me six months ago that I would already have used Ashes of the Fallen in four decks, I would've called that person a filthy liar. Then I would've apologized, because, alas, it is true. Two of the decks used Ashes (naming Samurai) to enable Oathkeeper, Takeno's Daisho to return any creature that it was equipping. The other two decks used Ashes (naming Bird or Cleric) to take advantage of Celestial Gatekeeper's double-Zombify ability. In Haakon's case, you'll obviously want to name “Knight” with Ashes of the Fallen. Haakon, scourge though he is, seems to have a soft spot for his slain comrades in the knighthood. As long as he's in play, you can play Knights directly from your graveyard, and with Ashes of the Fallen turning all of your graveyard-dwelling critters into Knights, this means you can play any creature directly from your graveyard. If Elton John can be knight, why can't an Ornithopter?

Using the combo, Jesper Wikström built a deck that featured Mindslicer (who needs a hand when you can play your creature spells from the graveyard?) and Kami of False Hope to prevent your opponent from doing key things, like “have a hand” and “deal damage to you.” In response to my article about Sanguine Praetor, Dustin Lesperance mentioned that the combo would work nicely alongside the Praetor, allowing you to cherry-pick the creature with the most relevant mana-cost from your graveyard. I suspect that it wouldn't be quite as consistent as, say, the Dredge-heavy version of the deck, but you wouldn't have to restrict yourself to Dredge creatures and that opens up a lot of possibilities. Patrick O., meanwhile, took the Haakon + Ashes of the Fallen combo, and added the aforementioned Ornithopter and Nantuko Husk to the equation. Since you can play Ornithopter for zero-mana from your graveyard, you can play it, sacrifice it to Nantuko Husk, and replay it, as many times as you like. This will make your Husk arbitrarily large, as big as, say, the CN Tower. If you don't like Nantuko Husk, you could make some other creature arbitrarily large. Fallen Angel or Carrion Feeder, for instance. You could make them as big as Yankee Stadium or the Pacific Ocean. While we're doing things arbitrarily, we might as well make a preposterous amount of mana (say, six bushels of it) by sacrificing the poor Thopter on a Phyrexian Altar. What can we do with all this mana? Well, Stromgald Crusader surely wouldn't mind if you used some of that Black mana to give him the ol' “Pump and Jump.” The other option would be to perform some serious spirit-consuming with, uh, Consume Spirit.

Haakon does his best work when he wakes up on the right side of the grumper, so to make sure that he arrives there safely, I've included a set of Buried Alives, and, just in case he gets stuck in your hand, a pair of Last Rites. The Buried Alives allow you to put Haakon where he needs to be, but it can also fetch other parts of the combo, namely Ornithopter and Nantuko Husk. So while it might seem like the deck uses a four-card combo (Haakon, Ashes, Ornithopter, and Nantuko Husk), you can get the job done with just two cards, Buried Alive and Ashes of the Fallen.

Each time I reanimate Haakon, or one of his freshly be-knighted minions, I like to say, “Wise fwom your gwaves!” as a tribute to the Sega Genesis&gt; “Classic,” Altered Beast. This is an incredibly fun thing to do, although your opponent might find it a touch annoying when you say it thirty-five times in the middle of your “infinite” loop.

4 Ashes of the Fallen 3 Phyrexian Altar

As always, this is just one possible way to build the deck. It's a little less dependent on Ashes of the Fallen than a purer combo version. If need be, the deck like a cross between a watered-down aggro deck and a watered-down control deck. Haakon and Stromgald Crusader will ensure that you don't run out of threats, even if your opponent destroys your Ashes, and you can always just send a huge Cabal Coffers-fueled Consume Spirit to the dome if the game goes long enough.

In his column last week, Frank Karsten pointed out the fact that you can use Gifts Ungiven as a makeshift Buried Alive. If you only search and find only two cards with Gifts, your opponent will have no choice but to put those two cards into your graveyard. The other advantage to Gifts Ungiven comes from the fact that you can use a variety of different cards as your win condition. Anything that can translate creature-sacrifices into damage (or mana, to power up a direct damage spell) can be used. For example, I could see making Gifts piles like:

How do I love tree? Let me count the ways …

What do you get when you cross a tree with a mutant wizard?

Time to get a new watch. 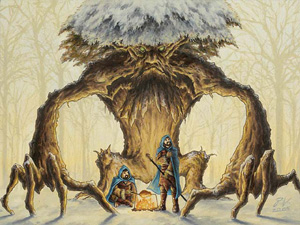 Hmm. I don't think I did that right. How about I turn things over to Geo, who had a better answer. Here's what Geo had to say:

“Anyway, I was reading your last article, and I felt in the mood to build a deck around some 'bad' cards. I quickly remembered Sheltering Ancient ... that card nearly drove me insane, trying to figure out a way to get all those counters on to my own creatures. I gave up on that and figured, if I can't put them on my creatures, I'll just take my opponent's creatures. How? Cytoplast Manipulator, of course. With that many +1/+1 counters on the other side of the field, what else could I use? With a little work, I got a decklist up and running.”

The creature suite is almost identical to Geo's version, but I changed the rest of the deck significantly. You really want to play Sheltering Ancient, so to help make sure that you get one, I included a full set of Muddle the Mixtures. You can either Transmute for an Ancient early, or protect it from removal late. Just in case your Cytoplast Manipulators are busy manipulating cytoplast somewhere other than on your playmat, you can use Frozen Solid, Mystic Restraints, and Freed from the Real to prevent the creatures you'll be enhancing with Sheltering Ancient from getting out of hand. Freed from the Real can be used as a sort of Pacifism-with-an-upkeep, but you can also suit up your Cytoplast Manipulator and start to steal more than one creature per turn. Plaxcaster Frogling does what any good frog should do, and protects your counter-laden creatures from opposing spot removal.

One of the neat things about Coldsnap is that it was designed with Limited in mind. Among the special features are the “Collect Me” cards, also known as the “Kindle” cards, also known as the “Plague Rat” cards, also known as Jim. These include the five Ripple spells. In Triple-Coldsnap booster draft, it's possible, if unlikely, to get nine or ten of these cards, which will dramatically increase their power. Of course, in Constructed you'll never have more than four copies of any of these cards and your deck will, by nature, be significantly larger. This seriously limits the effectiveness of the Ripple spells by significantly reducing the odds that there will be a Ripple spell among the top four cards in your library.

A few weeks ago, I paired Surging Sentinels with the library-stacking Congregation at Dawn, which made the odds of hitting more Sentinels with your Ripples a little more likely (say, 100% likely). Believe it or not, Ripley, you can actually pull off a very similar trick with the other Surging cards. How? I'm looking at you, Insidious Dreams from Torment. Like a super-powered Vampiric Tutor, you can, for example, put all of your Surging Flames on top of your library. All it will cost you is your hand. To lessen the severity of this, I've turned to another set of would-be “Collect Me's”, the Bursts from Odyssey. Flame Burst and Aether Burst join Coldsnap's Rune Snag to form a trio of controllish spells that, like Haakon, don't really mind being in the graveyard. That just means that the next one that comes along will be even better! To replenish your hand, Deep Analysis seemed ideal, since it also works well, almost twice as well, in your graveyard. Reito Lantern, meanwhile, allows you to restock your library with your Surging spells, which means that you can pull off the Insidious Dreams trick multiple times in a single game. Garza Zol, Plague Queen is a fine finisher and fits the colour scheme, but mostly I used her because she's new. If you give this deck a whirl, feel free to swap her out for some other creature, like Crosis, the Purger or even Cognivore.

Until next time, have fun collecting!