In Ravnica, There Is Room for Everyone

Ravnica—it’s a massive metropolitan area endlessly flowing across an entire plane. The city encompasses huge forests intertwined with spiraling towers, rushing waterways flowing around regal constructs, and gargantuan industrial complexes billowing with heat and steam. In every aspect of the city, there is life and death, from the endless residential sprawl filled with citizens who peacefully live their everyday lives across the cityscape, to the seedy underbelly of society who conduct business beneath the city in the putrid sewers.

One of the many worlds in the Magic: the Gathering® multiverse, many of the traditional rules of Magic still apply within, but there are many new and unique facets to this grand city. All of the colors of Magic are represented here, but long ago, an ancient guildpact was signed by ten of the most powerful forces in the city. Each of these signers represented two of the colors around the Magic color wheel. These guilds ignore the traditional alliances between friendly colors and opposed colors, instead focusing on the strengths of the powerful leaders that created each.

In the first installment of the Ravnica block, Ravnica: City of Guilds, we get to learn about four of these powerful guilds. Each of these guilds represents a convergence of all of the most powerful aspects of the two colors they represent. For each guild, Ravnica also introduces some powerful new abilities. Come with me while I explore each of these new guilds and examine what types of decks they might inspire players to build in the coming days. 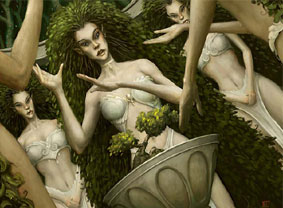 The Selesnya Conclave combines the strength in numbers that white has always offered with innumerable token-generating effects with the massive size of those green creatures that players have been crushing their opponents with for years. The Conclave accepts all kinds into their collective consciousness. You will find many new cards that let you generate lots and lots of little token saproling and spirits. This effect is then augmented by a new enchantment named Doubling Season. With this card in play, you get twice as many token creatures whenever you play a spell or effect that would give you a token, and twice as many counters on a card whenever you would get to add counters to a card.

Once you have all of these little guys on the table, the Conclave will let you use them to bring some of the biggest creatures in Magic history onto the battlefield. The Conclave has perfected the means to use their collective strength with a new ability called convoke. A creature or spell with convoke will allow you to reduce its mana cost by tapping your creatures to play it instead of your lands. You can even reduce the colored mana requirements of a spell by tapping creatures of the specific color needed.

This color combination is very proactive, insisting that you bring out many creatures big and small in an effort to overcome your opponent before his or her plans reach fruition. If you play these colors, your best road to victory is by tapping your creatures to attack. The Conclave is not a timid lot. 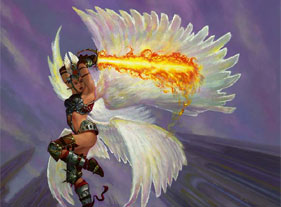 Unlike green and white, which are natural allies, white and red are normally enemies. However, they do share one vital link, the warrior spirit. The armies of the plains are normally well trained and well equipped, while the rampaging hordes of the mountains are more prone to fight with rage and fury as opposed to skill. When these two aspects are combined, they create a fighting force that is difficult to equal—they create the Boros Legion.

The newest weapon in the red white arsenal is an ability called radiance. A spell or ability with radiance doesn’t affect just one creature; rather, it affects that creature and every creature that shares a color with that creature. This ability can have a major impact on the game in two very different ways. A card like Wojek Siren will help give the Legion the upper had in a battle by giving all of your red and/or white creatures +1/+1 until end of turn. With the already potent offense the Legion can put forth, this ability for only one white mana can easily turn the tide of battle.

The second, and potentially even more devastating, use of this new ability can be seen with the card Cleansing Beam. Cleansing Beam deals two damage to target creature and each creature that shares a color with it. This effect could be devastating to any opponent, especially one focusing on a large army of small creatures like the Conclave.

Red and white have always been strong together. Since the long ago days when “Pro Tour Jank” was the deck to beat, white’s efficient little creatures combined with red’s creature removal and direct damage have been a formidable power. 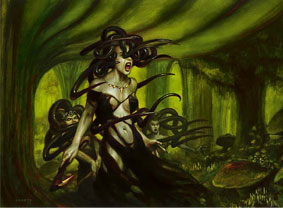 The endless cycle of life and death and life is well represented by the new cards and abilities that Ravnica gives to this guild. Black requires sacrifice to prove your allegiance. Green nurtures life and commemorates the force of nature. Together, these colors combine perfectly to equal another new keyword ability for Ravnica: City of Guilds, dredge.

Dredge is a replacement ability that can be used whenever a card with dredge is in your graveyard. Instead of drawing a card, put a number of cards equal to the number after dredge from the top of your deck into your graveyard. If you do this, you can take the card with dredge in your graveyard and put it in your hand. For a color combination without a lot of extra drawing ability, this is an excellent ability. Once you have enough mana to play some of your fearsome creatures with dredge, instead of drawing, keep bringing them back over and over again.

Additionally, by dredging a card from your library into your graveyard, you can find even more powerful dredge cards from you deck that you can dredge back to your hand later. One excellent example of what dredge can do is Grave-Shell Scarab. For 5 mana, you get a 4/4 creature that you can sacrifice for a draw. It dredges back to your hand for only one card from the top of your deck. This will allow you to get some more cards in your graveyard and then sacrifice it to get a draw that will put those cards into your hand as well.

This color combo will let you reuse some of the strongest, most lethal creatures in the environment over and over again to vanquish other players. Building a deck with the right mix of effect will be difficult for this guild, but once some of the best interactions have been put to the test, I think a solid deck will come out of it. 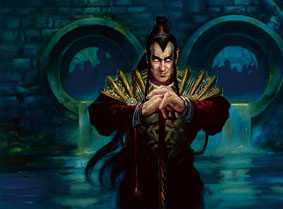 These are two colors with vastly differing abilities. This combination results in some of the best utility ever offered in a Magic expansion. The House Dimir is known as the Unseen guild. In most circles, its existence is only rumor and thought to be no more than a story told to scare children in the night. I assure you, however, this guild does exist.

With the ability to counter spells in several new and interesting ways, as well as destroy creatures and make a player discard cards, the Unseen is a powerful force. What makes them even more powerful is the skill with which they can do these things. Using a new ability called transmute, the Unseen can trade cards in your hand for cards from your deck, getting you the perfect card to thwart an opponent’s plan at just the right time. Say you have a card like Shred Memory in your hand. It allows you to remove four cards from your opponent’s graveyard from the game. This would be an excellent ability, particularly in a case where your opponent has several cards with dredge in their graveyard. But what if they aren’t playing black or green and have no way to return cards from their graveyard? What if instead they are attacking you with a Serra Angel each turn? Shred Memory allows you to pay the card’s transmute cost, in this case 1BB, to search your library for a card with the same mana cost as Shred Memory, perhaps a card like Terror, which can destroy that pesky Serra Angel.

The other recurring theme that runs throughout the world of the Unseen is milling. Of course, by milling I mean taking cards from the top of your opponent’s deck and putting them into their graveyard. This weapon is both potent and risky when facing a player playing black and green. While the use of cards with dredge may make it easier to run them out of cards, it will also give them more options to use against you before you have succeeded in your goal.

Whether the forces of the Unseen are trying to run out a player’s library or control the game by countering threats and destroying keep cards, the Unseen, while elusive, will be a major player on the streets of Ravnica.

As the set is laid out, there is a lot of synergy in these four color combinations. Many different interactions, both intended and unintended, will pop up when you start playing with the cards from one of these guilds. However, with every Magic design, there is always a little unexpected magic between the cards in the way they interact. Even though the most obvious combinations may fall in line with the way that these guilds interact, I encourage you to continue to innovate. There is a lot of room for the different guilds to work with one another, and you might be pleasantly surprised by the results you get.