Reach for the Scry

, Johnnies. It's Scry Week! I bet you didn't see that coming. Though I guess if you'd read any of the Monday or Tuesday columns, the theme isn't much of a revelation. Still, you might be wondering how the Johnny column is supposed to handle a mechanic like scry, which by all accounts is a certified Spike mechanic.

Fortunately, as Mark wrote on Monday, scry has become more than just a "rider" on otherwise straightforward spells. Monkeying with the top and/or bottom of the library has always been profitable for the Johnny, so coming up with deck ideas was the easy part. The difficulty was in devising the article subheadings, which usually combine a random pop-culture reference with an appalling play on words. Since Mark took all the good ones (I was really set on using "Scry, the Beloved Country"), I was left with:

Boys Don't Scry
No Woman, No Scry
Goodbye, Blue Scry
The Boy Who Scryed Wolf
A Scry in the Dark
Don't Scry for Me, Argentina
It's My Way or the Scry-way

Yikes. I had to use the MasterCraft cordless Barrel-Bottom Scraper (that I bought at Canadian Tire) to come up with those. The ones that eventually made the grade aren't much better, so be warned.

In the Blink of a Scry

You can't write a Scry Week column without mentioning the new Scry King, the latest Scry Captain of the World of Tomorrow, the Scryborg him- or herself: Cryptic Annelid. This guy's sort of like a Foresee with a four-butt that lets you dig six-deep. If that kind of one-shot amazacrazy scryin' doesn't set your heart afire, just imagine turning that one-shot into a two- or three-shot of draw-smoothing, deck-stacking goodness. All you need is a Momentary Blink. Of course, you don't need me to tell you that a creature with a sweet comes-into-play ability is on good terms with the ol' Blink. That's been obvious since Momentary Blink was still a twinkle in some designer's eye. Luckily, there just so happens to be another blue-white card that plays nicely with Cryptic Annelid and its CIP cronies, scry, and Momentary Blink. That card is none other than Aethermage's Touch.

The good news is that there are plenty of new goods for a Blink/Touch deck. Besides the town scryer, Cryptic Annelid, Future Sight brings with it Seht's Tiger (I can't wait for Seht's Lion and Seht's Bear and the obligatory "Oh my!"), not to mention Venser, Shaper Savant and the yin to Bogardan Hellkite's yang, Angel of Salvation.

Perhaps the most unusual comes-into-play ability that you can "abuse" with Momentary Blink and Aethermage's Touch is that of Epochrasite. It comes into play as a mere 1/1 if you played it from it your hand. When it dies, instead of hitting the bin like everyone else, it becomes suspended. If it comes into play without having been played from your hand—like, say, if you play it after removing the last time counter—it comes into play with three +1/+1 counters. So you'll have yourself a 4/4 Epochrasite if you spring it upon your opponent with Aethermage's Touch or if you send it to the removed-from-game zone and back with Momentary Blink. With Cryptic Annelid, Judge Unworthy, and the (uncounterable!) scry-licious combination of Azorius Chancery and New Benalia combined with old friend Sage of Epityr (which has a kind of scry), each Aethermage's Touch should be a success. You can rout your opponents in combat with Angel of Salvation, dig through nearly half your freakin' library with an Annelid and a single Blink, or effectively counter a hellbent Demonfire (the very worst kind), not one but two different ways.

Excuse Me, While I Kiss the Scry

A little while ago, I got a message from a reader named Harley which read: "Future Sight is out and here's a little combo deck I conjured up. The deck runs a simple combo: Tunnel Vision + Retether. This combo not only gets tons of your Auras into the graveyard, it also enables you to draw Retether and play it like Replenish. Sadly, the only flaw is having no creatures in play to enchant. But now with Narcomoeba, they all happily come into play via Tunnel-ing your Vision!" 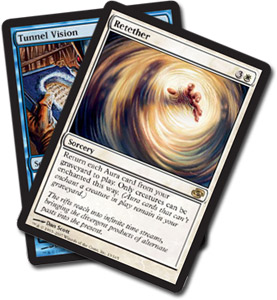 There's a lot of cool stuff going on there, so much so that I almost wrote about the deck last week. Before I did, I realized that Harley's deck did a lot of scrying or scry-like things. As he goes on to explain, "Scry your way through the deck with the help of Court Hussar, Annelid, Telling Time, and Foresee. While you're doing that, try to scry the single copy of Retether onto the bottom of the deck so that more cards can be milled into your graveyard when casting Tunnel Vision. When the combo succeeds, your Narcomoebas would become 'Akromas' and swoop in for a 20-damage kill."

What I like most about the deck is its simplicity—heck, its elegance. Basically, while you're digging for your Tunnel Vision with your scry or pseudo-scry, you are at the same time setting up the bottom of your library which will make sure that Tunnel Vision mills as many cards as possible. Better still, while you're milling most of your library away to set up a huge Retether, you are putting creatures (Narcomoebas) into play so your auras will have some place to go when you finally play the white sorcery. So all you really need to focus on is the Tunnel Vision, which is somehow very appropriate. If you happen to draw the sole Retether in the deck, you can still fire off a library-shrinking Tunnel Vision by simply naming one of the other singletons, like Cloudseeder, Foresee, or one of the lands.

To bulk up your little Narcomoebas, Harley used Auramancer's Guise, Leaden Fists, and Griffin Guide. Plan A involved über-aura Daybreak Coronet, but he quickly discovered that it doesn't work too well with Retether. Unless one of your critters is already enchanted, all of your Coronets will just stay in the graveyard. It's right there in the Future Sight FAQ, which is, not surprisingly, a nice resource for people who want to use cards in unexpected ways.

1 Emblem of the Warmind

Now, if the Tunnel Vision + Retether plan is foiled somehow, you can just enchant your guys the old fashioned way and beat down. Leaden Fists has no drawback when you put it on the vigilant Court Hussar. Auramancer's Guise grants vigilance to its wearer, so feel free to pile those Leaden Fists on top of that creature as well.

More than Meets the Scry

Dubbed "evil scry" by the design team and "scry with a goatee" by the team of writers that prepares each edition of House of Cards, fateseal is a mechanic that, through random coincidence, shares much of its name with the Mirage card Sealed Fate. While I've never sealed anyone's fate with this particular spell, I have had a lot of fun playing endless Portents and Ransacks in one of my old mono-blue decks. It really was not a good deck, since it had something like a single-digit win percentage (I'll let you guess which digit), but, boy, could it make a game take forever.

There aren't a ton of cards with fateseal. That is, unless you have five hundred and sixty thousand copies of Mesmeric Sliver or Spin into Myth for some reason. No, barring some bizarre case of card-hoarding, there's only two fatesealers and I just listed them. Spin into Myth is reminiscent of Ether Well, an old favourite of mine. It's the Hinder of bounce spells, which is cool, to be sure, but doesn't necessarily get the creative juices flowing. The fateseal Sliver, which I am going to call Eric, has much more potential since its effect is repeatable. If only there was an easy way to put Slivers into play, turn after turn. Oh, wait, there is: Sliversmith! With both the 'Smith and Eric on the board, you can essentially trade the card you drew for the turn (by pitching it to make a Metallic Sliver token) to hopefully deny your opponent a useful draw (by fatesealing good stuff to the bottom of the deck while leaving inconsequential cards on top). It's not a lock by any means. If your opponent has two useful cards on the top of his deck, then there's not much you can do about it. That doesn't sound like a very good deal, until you realize that you're slowly amassing an army of Slivers at the same time. You can do what you want with the little guys. Pump them up with Sinew Sliver and beat down. Add Telekinetic Sliver and go for something that more closely resembles an actual "lock." Use all of your smithed Slivers as little millers with the help of Screeching Sliver. For some reason, I like this last one. Both Screeching Sliver and Eric the Mesmeric Sliver have some wonderful synergy with a card with which you should all be familiar by now, if only because I wrote about it the previous section: Tunnel Vision.

Now, just as Harley used scry to set up a self-milling Tunnel Vision, I intend to use fateseal to set up a potentially devastating opponent-milling Tunnel Vision. Of course, there's no guarantee that you will be able to fateseal a singleton to the bottom of your opponent's library. There's no guarantee that your opponent is even playing any singletons (although this seems unlikely if you're playing in the Casual Room online). Your best bet is to name something you've already seen a few times, like Last Gasp or Remand, or a nonbasic land. There are plenty of the latter to choose from these days, with the Ravnica guildhouses being the most likely one- or two-ofs.

One cute trick you can pull with Tunnel Vision involves having an undecided Shapeshifter's Marrow in play. At the beginning of your opponent's upkeep, they have to reveal the top card of their library. If it's a creature, they have to dump that card in the grumper and Shapeshifter's Marrow becomes a copy of that creature permanently. Normally, this can be a bit of a crapshoot, but if you play your Tunnel Vision and name the best creature your opponent is playing, they'll lose it at the beginning of their upkeep and you'll get to copy that creature. Not a bad deal. You can also use fateseal to make your Marrow all it can be.

Besides Mesmeric Sliver, you can use Spin into Myth or even Condemn to set up the bottom of your opponent's library. Muddle the Mixture can be used to save your guys from removal spells, or it can transmute for Sinew Sliver, Sliversmith, Whitemane Lion, or Hivestone. The Lions can also be used to protect your creatures, but when you combine it with Hivestone and Mesmeric Sliver, you can start fatesealing several times per turn.

Until next time, the scry's the limit.