Bennie Smith began playing Magic in 1994 and started writing about it shortly after. A Virginia State Champion, he enjoys few things better than winning at tournaments with home brews. Bennie has a weekly column on StarCityGames.com. He also recently published The Complete Commander. Follow him on Twitter, on Facebook, and the occasional Commander games on Magic Online under the handle "blairwitchgreen."
Share Article
Share Tweet Share

occurred to me as I was watching replays to gather information on the recent 4x Premier Events for this week's recaps—while Magic Online replays are constantly referred to by lots of Magic writers, some people may not be aware of how to utilize this incredibly useful and fun feature of Magic Online. The grizzled veterans of the game can skip down a few paragraphs to get to the 4x recaps, but if you're new to Magic Online or maybe still sitting on the fence about whether to jump into MTGO, here's some 4-1-1 that you should know.

If you play Magic competitively, whether at the pro level, the occasional qualifiers, Champs, or your local Friday Night Magic, it can be worth your while to download Magic Online simply for the tournament replay value (though it's hard to resist buying the Momir Vig avatar for 3-4 tix and playing some insanely fun casual Momir Magic). Granted, downloading Magic Online does technically cost you $10, but you do get that right back in credit for the Magic Online store. Even if you never cash that in, viewing replays is a valuable resource—and I say that as a longtime Magic player and fan of the game, not just as writer for Wizards. When I stop writing this column, I will still be doing research on the online Premier Events using my personal account. You can't currently get decklists, but you can watch the games unfold and make note of the relevant cards played while learning a lot about what good cards and strategies have risen to the top of the tournament heap. Here's how you do it. 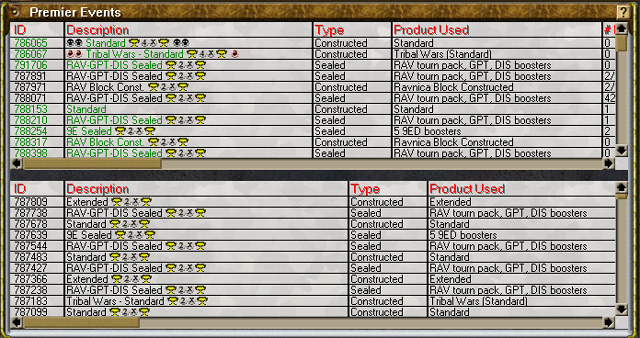 Each of the columns on the lists can be adjusted wider or narrower so you can see more or less of them onscreen, and you can also sort up or down for each column by clicking on the column header.

Sorting by Starting Time (you can get there by scrolling over to the right) is handy because you can get the most recently concluded tournaments at the top and work your way backwards. What I typically do is go to the Magic Online Events Schedules to find out the dates and times of the tournaments I'm interested in reviewing (I usually pick the 4x Premier Events because they have a larger turnout), and then go back to the concluded Premier Events screen and scroll down until I find that Start Date and Time.

Click on the tournament you want to review and a Go To button will appear. On some computers (such as mine), the appearance of the button will cause the screen to adjust slightly, and your mouse may end up pointing to a tournament right above or below the one you actually want to watch, so double check before clicking the Go To button to avoid confusion. I speak from experience. 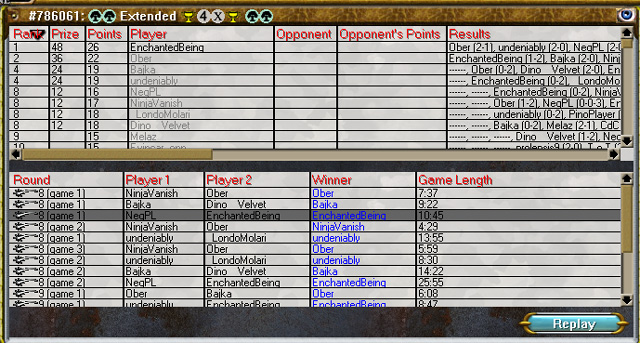 Now you'll get to another split screen. At the top will list all of the player information, and if you click on the Rank column header, you'll see the winner of the tournament on down to last place. The bottom half of the screen lists all the Top 8 games; if you want to watch replays from the Swiss rounds, you'll need to find the tournament while it is still running, since once it's concluded only the Top 8 replays are available. Just click on any of the games you're interested in watching and click the Replay button. 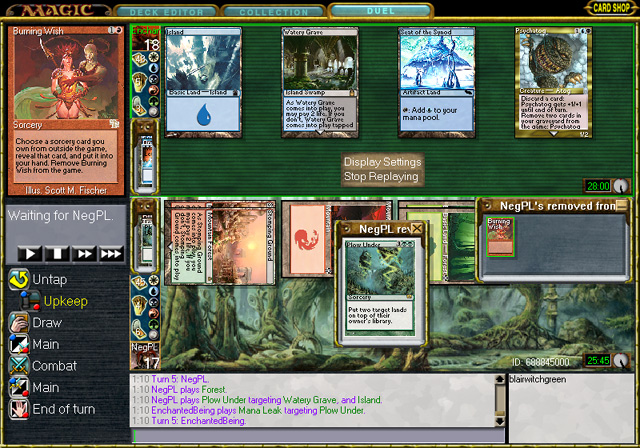 Watching the replays is a lot like watching a match in the casual play areas, only you get to control the pace with the “VCR buttons” that appear on the left side of your screen. You can also click on the graveyards to see what cards are there -- sometimes as the review plays out spells jump into the graveyard too quickly for you to see them on screen so it's handy to glance in there to see what's been played. When you're finished reviewing the game, right click and a mini-menu will pop up and you can just select Stop Replaying.

In Hotlanta for U.S. Nationals?

Before I get to the recaps, I just wanted to call out a great opportunity for Magic players who will be making the trek to Atlanta, Georgia this weekend for the U.S. National Championship and side events. There's going to be a Magic Online Roundtable with Justin Ziran, Brand Manager, & Michael “elf” Feuell, Senior Programmer from 2:00 pm – 4:00 pm Saturday, July 29th 2006. Check out the link if you haven't already heard about this opportunity to talk with the guys who make MTGO happen, and there are also some really cool prize give-aways!

The Ravnica Block Constructed metagame seems to have opened up a bit recently. Green/Black/White good stuff decks continue to do well, using green acceleration and mana fixing, disruption in the form of Rolling Spoil and Angel of Despair, and Skeletal Vampire as the finisher. Some decks are splashing blue instead of white in order to run the fierce Simic Sky Swallower (see Szach's deck listed below). This particular tournament however was won by a good ol' Orzhov deck. PinoPlayer ran the usual suspects, led by Dark Confidant and including Mortify, Orzhov Pontiff, Faith's Fetters, with Belfry Spirit for spice. Caleb. ran a very interesting build featuring tons of good gold cards like Lightning Helix and Electrolyze along with Pillar of the Paruns; I saw at least three different split cards during the replays, so I dubbed his deck “Parun Splits.” I hope he doesn't mind...

I think it's going to be interesting studying the decks that do well in these large Ravnica Block Constructed tournaments this summer, since they will help define the metagame once Time Spiral rotates in prior to Standard States this fall. How can they be helped or harmed adding 9th Edition and Coldsnap cards into the mix? How will they stand up to the Wildfire and Tron decks that won't be going away anytime soon?

Only one of the Top 4 players got back to me with a full decklist; thanks szach!

Mad dogs have been given new Life in Extended, but they still fall beneath the spells of Dr. Teeth in the end. Psychatog maintains alpha deck status, but the relatively new “Aggro Loam” is nipping at Tog's tail. If you haven't seen this deck, it's a leaner, meaner version of CAL (Confinement/Assault/Loam), utilizing the same Life from the Loam + cycling lands card-drawing engine but stripping out the slow, controlling cards in exchange for Wild Mongrels and threshold-lovin' Werebears. I would definitely recommend watching the replays for this deck - it looks both fun and powerful, and if someone can figure out a way for it to better fight Tog, you'd have yourself a tournament winner.

Three of the Top 4 players offered to share their decklists, and some offered their thoughts on the Extended metagame.

Bajka: “About the metagame? Well I think the metagame became more interesting after releasing Ravnica duals, since it's easier to combine colors and make some original decks, but we can also see the old favorites. I choose a combo deck, Psychatog + tequila + sombrero + SER I MAJONEZ makes a pretty good winning combo - you should try it someday. I believe Aggro CAL [a.k.a. Aggro Loam] and Tog are the strongest archetypes, but with the support of above combo they become monster decks.”

(Note: While I'm very familiar with tequila and sombreros, I had to ask Bajka what SER I MAJONEZ was. “It's Polish tech” was the reply, which didn't really answer my question and only deepened the mystery – Bennie)

Max Fitzer, A.K.A. undeniably: “The Extended metagame is ridiculously fast right now, with even the control decks able to get turn 4 kills. I wouldn't recommend playing Tooth unless you are really lucky (like me), and/or really poor (like me). With the best deck being Aggro Loam, I strayed from normal Tooth lists and added Scrabbling Claws and Caryatids main, cutting Oblivion Stones and Moment's Peace. This worked really well for me considering I ran into 3 Aggro Loam decks on the day. The Tog match up is horrendous, the only real way I have to win ironically is if they cast Cranial Extraction so you can untap and punish them. All in all the format is a lot of fun, and leagues better than any other format on MTGO at the moment.”

One thing I was curious about is whether Coldsnap will make any significant impact on the format. Any Extended specialists out there have any thoughts on that? Will protection from black “jump knights” be able to fend off Tog? Will Dark Snap (Dark Depths/AEther Snap) take the format by storm? Hit me in the forums.

I don't know exactly what the new Into The Aether columnist will and won't be covering when he takes over in a few short weeks, so I figured I'd put out a last call to see what you all would like to see me cover here before I exit stage left. Have I neglected any Magic Online format? Is there any unsung heroes of the MTGO community that deserves a spotlight? Give me a shout in the forums on email me and I will try and squeeze it in! Don't ask me for more Magic Online III information though, because I do know that I won't be getting any new information on that before my tenure is up - though I imagine there will be coverage of the Roundtable event from U.S. Nationals somewhere that will toss out some choice nuggets of info!

I also wanted to thank everyone who responded to my announcement of leaving Into The Aether last week; your kind words in the forums and email have certainly been uplifting. A few of you wanted to know of my future writing plans, and right now I'm hoping to resume writing for Star City regularly, so I hope to see some of you over there!