efore the 2012 season begins at Grand Prix Austin in early January, Wizards of the Coast is announcing the following changes to the premier play tournament structure and Planeswalker Points system. These adjustments are a culmination of an extensive review to the changes we announced in September and November. Included in these changes are:

Details on each bullet point can be found below. For more information on the decisions behind these changes and how player feedback influenced the process, please read "Addressing Changes to 2012 Magic Premier Play" by Director of Organized Play Helene Bergeot.

Several changes are being made to the Planeswalker Points system. Competitive Planeswalker Points will no longer directly award invitations to the Pro Tour starting with Pro Tour Avacyn Restored in May. The Competitive Points category is being split into two groups: Seasonal Award and Yearly Award. In addition, some multipliers are changing and the Professional Points category is being rebuilt to model the previous Pro Points system.

Here is a review of how the Planeswalker Point categories are being adjusted: 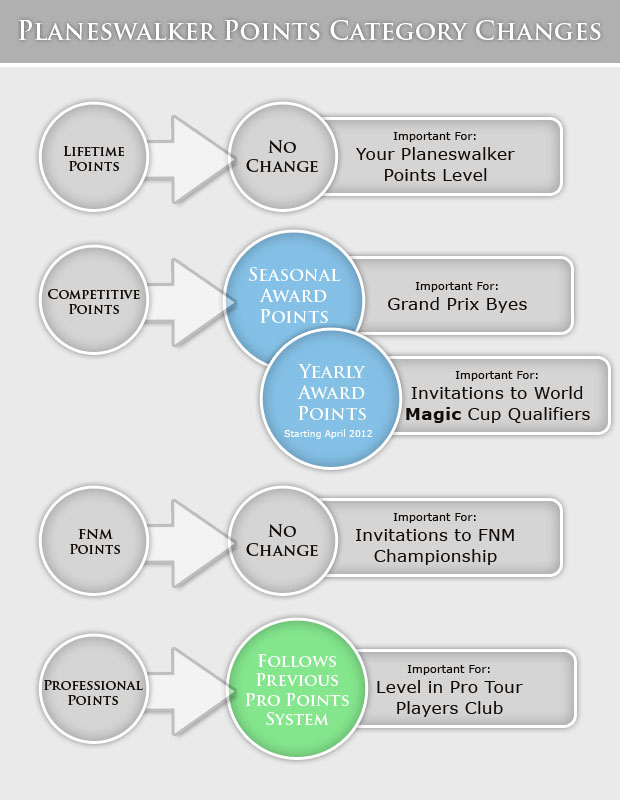 Along with changing category labels, some multipliers are changing. The multiplier changes listed in the chart below will go into effect for all events run after December 25, 2011, and will be reflected on the Planeswalker Points standings and information pages in late January. The events at the 12x multiplier level will only contribute points to a player's Lifetime Planeswalker Points total, not his or her Seasonal Award or Yearly Award totals. There will also no longer be an 18x multiplier for Top 8 finishes at Pro Tours. 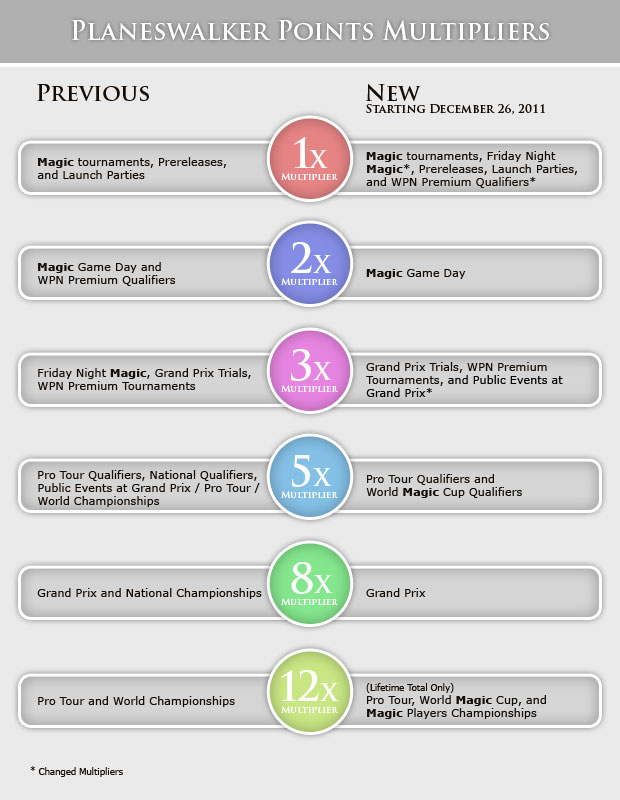 As the evolution of the Planeswalker Points system continues, players will no longer be able to view their Elo ratings as of late January 2012.

Wizards intends to include a number of countries in the World Magic Cup similar to the number of national teams that participated in previous World Championships. That list can be found in the Premier Play Invitation Policy. Along with a prize purse of approximately $150,000, the World Magic Cup will award Professional Points based on finish order and the top four teams will earn invitations and airfare to the next Pro Tour. Participants who are Pro Club levels 6–8 will earn a $1,000 appearance fee in 2012. More information on the Professional Points award structure can be found here.

Because 2012 is a transition year, Wizards of the Coast needs time to realign the qualification windows on the calendar. Measuring a player's performance over a 12-month span is important in determining who earns an invitation, but the compressed time frame to launch the World Magic Cup in 2012 demanded a shortened season to set the qualification levels. Therefore, Seasonal Award points will be used for the season running December 26, 2011–April 1, 2012 to determine invitations to World Magic Cup Qualifiers in 2012. For invitations to World Magic Cup Qualifiers in 2013, the Yearly Award points will be used.

Invitation thresholds vary by country and are listed in the Premier Play Invitation Policy. Plane tickets will be awarded to the winners of each World Magic Cup Qualifier and the player earning the "top pro" slot. The Yearly Award season used to determine invitations to 2013 World Magic Cup Qualifiers will begin April 2, 2012 and end March 17, 2013.

The new version of the Pro Players Club will use Professional Points to determine levels, following a scale very similar to the Pro Points system used in 2011. The levels are based on thresholds and have been streamlined to reward the top professional players each year.

Due to the timing of this transition and the change to the "end" of the Magic year, the stretch of time used to determine 2013 Pro Club levels will be June 13, 2011–May 13, 2012. Benefits earned by levels set at the May 13, 2012, cut-off will be honored immediately. Pro Club benefits earned in 2011 will be honored for the entire 2012 calendar year. Because of the overlap in benefit systems, a player will earn benefits based on the higher level of the two systems he or she has achieved.

Because the 2011–2012 and 2012–2013 seasons have several significant differences in their schedules, the Silver, Gold, and Platinum thresholds for the 2012–2013 season will be reexamined and likely be higher. Those levels will be announced by May, 2012 (the start of the new season).

When the new levels kick in, Magic Pro Tour Hall of Famers will earn the equivalent of Gold level benefits along with a $500 appearance fee at Pro Tours and the World Magic Cup (if invited). If a Hall of Famer is earning Platinum-level benefits, the $500 will be in addition to the base appearance fee for Pro Tour and World Magic Cup participation.

The graphic below illustrates the overlapping seasons for the next 18 months and the Planeswalker Points that feed each category. Mouse over the arrows to scroll left to right, and click on the arrows to increase the scrolling speed.

Starting with the Pro Tour Avacyn Restored in May, invitations at each Pro Tour will be awarded in the following categories:

Invitations for Pro Tour Dark Ascension have been extended to the top 25 individual finishers and top four national teams from the 2011 World Championships to close the gap between the old invitation system and the new one. In addition, the top four teams at the World Magic Cup will earn invitations to the next Pro Tour.

The new thresholds are 300 Seasonal Award points for one bye, 600 points for two byes, and 1,200 for three byes. The threshold bye system will begin with the season starting December 26, 2011 (concluding April 1, 2012). Grand Prix Trials will continue to be run in Wizards Play Network locations and offer a three-round bye to the winner.

If a player crosses a threshold in the middle of a season, he or she will earn the byes for any Grand Prix left that season, and all Grand Prix the following season. Along with having an 8x multiplier for Planeswalker Points, Grand Prix will offer Professional Points for high finishes. For the breakdown of Professional Points awarded at Grand Prix, visit this page.

Previously called the 2012 World Championships and scheduled for Gen Con, the 2012 Magic: The Gathering Players Championship will take place between Gen Con and Pro Tour No. 3 at a location to be determined. It remains a 16-player event inviting the following players:

The Magic Players Championship will be a three-day event testing players across prominent Constructed and Limited formats. This event will have a $100,000 prize purse as previously announced. The only changes listed above are the inclusion of the Player of the Year as an invited player and a shift of the date range for qualification to align it with the new cut-off dates for the new Pro Players Club. Because of the unique nature of the Magic Players Championship, Professional Points will not be awarded directly by finish order. Instead, players will earn one Pro Point per match win and top finishers will earn additional Pro Points.

For more background information and reasoning behind these changes, please see the Helene Bergeot's article "Addressing Changes to 2012 Magic Premier Play." Director of Magic R&D Aaron Forsythe will also be addressing the Organized Play system, as well as looking back on many other facets of Magic in 2011, in his "From the Director's Chair" feature that will be published on DailyMTG.com the first week of January.