The above probably doesn't include all PTQs from the weekend of 3/5, but it does include the Top 8 of Grand Prix Seattle.

This year's Extended is such a rich and moving animal that I am saddened that next year's rotations will so drastically change the format's landscape. At Pro Tour Columbus, Randy Buehler, Grand Poobah of Pulling Magic Cards Out of His Hat, chuckled to me that he couldn't wait for the rotations. According to Randy, Wasteland is the worst thing in Extended, and he can't wait to see it go.

However I believe that Wasteland is one of the best parts of Extended. It is a powerful resistance card that allows beatdown decks to fight faster combination decks. More interesting than the existence of Wasteland in the format, though, is the fact that it isn't even universally played in the decks where it shines!

Both decks are Goblin attack decks with fast beatdown via Mogg Flunkies, both decks rely on the unholy trinity of Goblin Matron, Goblin Ringleader, and Goblin Warchief to break the rules of cards and mana, both decks use the abusive Aether Vial to speed their board development, both decks even agree on the same number of main and sideboard Gempalm Incinerators, and neither deck runs a black splash for Cabal Therapy or Duress (as Gerard Fabiano and Antonino DeRosa did at PT Columbus)... but the two decks nevertheless differ greatly in terms of mana base.

Ripley runs only 20 lands and Chrome Mox, whereas Postema borrows the best elements of Red Deck Wins via a full compliment of Rishadan Port and Wasteland.

Despite the fact that Ripley has access to both Naturalize and Engineered Explosives after sideboard, I don't even know that it is clear that he has more options than Postema's mono-red Goblin deck. It is arguable that Wasteland and Rishadan Port are better against a deck like Aluren -- that relies on a relatively slow four mana enchantment to win -- than Naturalize is, because, with the right draw, Aluren can "go off" against a Naturalize at instant speed even with one of its relevant creatures on the stack.

Differences like the mana bases between two non-black Goblin decks can show the ability of a designer to improvise and customize even within an exsiting archetype. Both versions are obviously very powerful, taking their players to consecutive Grand Prix Top 8s, and yet, there is no consensus on the right way to build the land base.

On the subject of Goblins... It sure had a great week. Two copies in the elimination rounds of Grand Prix Seattle headline a week that saw this archetype rocket to the uncontested Top 8 lead for the first time this season.

What is more surprising is the performance of The Rock. The Rock finished right behind Goblins this week. Also claiming two copies in the Top 8 of Grand Prix Seattle, The Rock not only took first place at that tournament, but racked up a couple of good old fashioned PTQ wins as well.

The differences between the two decks in the Top 8 of Grand Prix Seattle might look at first glance like a blow for Sol Malka's favorite deck, but they actually highlight two different decks that rose out of the 1999 qualifiers for Bob Maher's PT Chicago. We think of G/B decks in general as "The Rock" but Sol's then-teammate, Bill Macey, actually won a PTQ during that season (as did the mighty Jelger Wiegersma, whom Malka credits with the board control idea of Hermit/Servitude). I point out the Macey deck only because it was so fundamentally different than the deck that Sol was playing at the time. Rather than a control deck that sought board advantage, the Macey deck was a beatdown deck that can be seen as a parallel predecessor to the many Rancor decks we've seen cropping up this season. Here is the list Bill used to win a late qualifier:

Now check out Grant Struck's list from the Top 8 of GP Seattle:

Now obviously Macey didn't have access to beatdown cards like Wild Mongrel. He had to settle for Echo threats like Albino Troll and Acridian. But Grant Struck, via the many sets available in today's Extended, gets to fight with three drops from Troll Ascetic to Call of the Herd and staple a Duress to a two drop in Mesmeric Fiend. Struck's version, with its Rancors, Sword of Fire and Ice, and actually threatening threats is the attack-oriented cousin to the normally control-oriented Malka deck, better exemplified in Ernie Marchesano's GP winner.

Overall, the story this week is the rise of Urza's Block decks. While the difference between Struck and Marchesano is subtle and strategic, highlighting the tension between builds from half a decade ago that these GP competitors might not have been aware of, other top finishers this week were explicit Urza's Block updates.

The most exciting is of course Tsyoshi Fujita's list:

4 Through the Breach 1 Cave-In 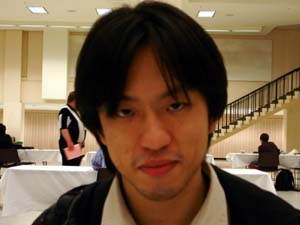 Fujita's deck is much more powerful than its Urza's Block predecessor. Not only does Tsyoshi get twice the copies of Sneak Attack than the original (redundancy from Through the Breach), but he has Chrome Mox and Seething Song to speed his drops. Magicthegathering.com's Pro Tour video specialist, Jon Becker, innovated the idea of "playing creatures you can actually cast" back in 1999 (Keldon Champion and Viashino Cutthroat), but Fujita does him one better in Rorix Bladewing. Considering that Extended boasts more than one deck based on getting a quick Rorix out there, the fact that Fujita's deck can not only "go off" combo style with Sneak Attack but bust the Bladewing as soon as turn two makes it an aggressive deck to be reckoned with; Dragon Tyrant + Blazing Shoal is just scary.

Back on the PTQ circuit, the other Urza's Block update of note is Trinity Green:

3 Call of the Herd 4 Living Wish

4 Chalice of the Void 3 Sword of Fire and Ice

With only five representatives this week (which, incidentally, is five times as many copies as last week's Top 8s), Trinity took more first place finishes on 3/5 than any other deck but The Rock.

Like the Macey, Malka/Wiergsma, and even Sneak Attack decks we've talked about so far, mono-green control with Rofellos, Llanowar Emissary, Masticore, Deranged Hermit, and of course Plow Under, was a popular deck during 1999's PT Chicago qualifier tournaments. The Extended update uses many of the same threats, but adds some powerhouse cards from more recent blocks to the mix to defend against Trinity Green's most powerful enemies.

With acceleration from Birds of Paradise, Llanowar Elves, and especially Rofellos, Llanowar Emissary, Trinity Green is already set up to crush most control decks. The secret of this strategy is that Trinity can play more threats in a single turn than a control deck can easily counter, with any of them capable of ending the game. Can a board control poor deck like Psychatog ignore a Skyshroud Poacher? The second this Rebel taps, the opponent will be staring down the "9/9" Deranged Hermit. Even NO Stick, which probably thinks itself sitting pretty on Orim's Chant or Solitary Confinement, will be on the wrong end of a Viridian Zealot... possibly with lethal damage already set up and in play.

The weakness of this deck is that it has a relatively low land count (22), but many high mana threats, from the four mana Masticore to the even more expensive Plow Under. Trinity Green needs its creatures to live in order to play out threats, and even its lands (Gaea's Cradle) require creatures to start making mana. Therefore, as strong as the deck is against control, it is very vulnerable to cards like Lava Dart, Mogg Fanatic, and the rest of the Red Deck Wins elimination suite... all of which cost one mana.

Enter Chalice of the Void. This card is quite useful against a deck like Mind's Desire, whose entirely necessary Sapphire Medallions, Sunscape Familiars, and Brain Freezes all cost two mana. Moreover, as soon as turn two, a Chalice of the Void can shut off every Cursed Scroll, Firebolt, Lava Dart, and Mogg Fanatic in an opposing Red Deck. Zac Hill's Little Rock champion is even more hateful. With his Sword of Fire and Ice, any creature can go fireproof, and even Birds of Paradise becomes a potentially lethal threat.

A Virginia State Champion, Shaheen has made Top 8 in three of his last four PTQs with this highly unusual deck (unusual for Extended, that is). Rather than the Urza's Block theme that we've seen in many of this week's innovative finishers, Shaheen's deck is more reminiscent of an Onslaught Block deck with a splash of Invasion. Though Shaheen plays only 24 lands, he has a ton of manipulation to keep his mana flowing. Against decks like Affinity, he can go straight to Akroma's Vengeance with Temple of the False God; against opposing control decks, he has uncounterable card drawing threats like Decree of Justice and Eternal Dragon, and against combo, he has Meddling Mage.

Shaheen makes a use of Brainstorm that would make Bob Maher or Erik Lauer smile. With Eternal Dragon, Flooded Strand, a ton of cycling, and even Enlightened Tutor out of the side, Shaheen's Brainstorms grab lands in the early game but shuffle up relevant answers going long. On the subject of that sideboarded Enlightened Tutor, I really like how Shaheen has not an artifact or enchantment main but brings in Sphere of Law, Damping Matrix, and Arcane Laboratory out of the side... and leaves the Tutor where his Cunning Wishes can fetch it (to, in turn, fetch his bullets). Nothing like turning Golden Wish into a three mana instant!

These decks, dozens of others from the week of 3/5, and also some previously missing decks from weeks gone by can all be found at the Extended Top 8 decklists page.