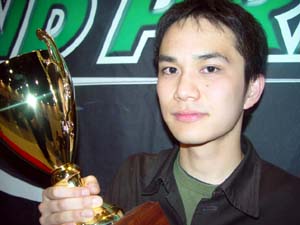 GP Sendai Champion, Ichiro Shimura Grand Prix circuit returned to the Tohoku region of Japan for the third time last weekend with GP Sendai, this time testing the players' skills at Mirrodin-Darksteel sealed and draft play. Over 500 players attended, with most of the top Japanese pros present at the event. Only the Ruel brothers and Sam Gomersall showed up from outside of the region – all three spent nearly a month hanging out in Asia.

Despite their strong starts, neither player held up in the draft portion of the tournament well enough to advance into the top 8. The top 8 featured the likes of Worlds finalist Jin Okamoto, team PS2's Masashiko Morita and Antoine Ruel. In the end it was Ichiro Shimura who took home the top prize. Shimura has played on several Pro Tours, but this is his first major success. Shimura's winning deck featured Spikeshot Goblin, Grab the Reins, and Loxodon Warhammer.

While top 64 players were battling it out for the Grand Prix champion title, other players had an opportunity to compete in a Standard tournament titled the Michinoku Open. Keita Mori was kind enough to translate and type up the deck lists from that tournament for us, and I am happy to be able to share them in this column.

A total of 76 players competed in the swiss-style event. When the dust cleared, Abe Masashi was the winner, piloting his Goblin deck to a first place finish:

A very standard Goblin build except for a pair of Chrome Mox that Masashi used to speed up his deck, the real surprise is the complete lack of today's much-lauded Skullclamps – a card that seems like a perfect fit for this archetype. In the finals, Masashi defeated Takamatsu Hiroomi, who brought a mono-white control deck to the table:

2 Renewed Faith 4 Pulse of the Fields

Pulse of the Fields and Renewed Faith are the cards that seem to allow this deck to pursue its slow, deliberate strategy against an aggressive field. With four Eternal Dragons, this deck is willing to play fewer Plains to make room for lands like Cloudpost and Temple of the False God, as it needs to generate massive amounts of mana to win via Decree of Justice. It is a reasonably simple build that can do very well against creature strategies but will fall short against other control decks, since so many of its cards are dedicated to defeating the more aggressive opponents. Note the four main-deck Damping Matrix - Hiroomi was prepared for a heavily Affinity-weighted metagame.

Speaking of Affinity, that is the archetype third place finisher Satoshi Harada utilized in this tournament. His entire deck consists of Block cards except City of Brass in the main and Mana Leak in the sideboard. With Genesis Chamber and Skullclamp already in the deck, it is highly surprising that Harada elected to avoid the Auriok Steelshaper / Brain Freeze combo. Adding five cards to his deck would have made it far stronger, and he could easily sacrifice Shrapnel Blasts and one of the Enforcers to squeeze these in. Without this combo, I am not convinced Genesis Chamber belongs in the main deck.

Hiraki's deck is exactly the kind of strategy that would give major problems to the finalist. He pursues a similar strategy, choosing to sacrifice some of the consistency in favor of being able to defeat non-creature based decks more consistently. Blue-White Control emerged as probably the most powerful archetype in Standard prior to Darksteel, and Hiraki shows that it remains highly viable now. Damping Matrix makes an appearance in his main deck as well.

Japanese players love their Goblin Bidding decks and this one is a solid example of the archetype. Se does not neglect to take advantage of Skullclamp. Also note the main-deck Shatters – once again, it seems many of the successful players in this tournament took extra steps to deal with Affinity decks along the way. Oversold Cemetery in the sideboard is an interesting touch – an extra problem card for the control decks.

We've seen this archetype perform well at the Last Chance qualifier at Pro Tour: Kobe, and then at Pro Tour: Kobe itself, as played by the French. Another top 8 finish further proves its merit, even if at a first glance this deck looks more like something belonging at the casual play tables.

For those of you not familiar with this archetype, its goal is to quickly generate mana (often using Sylvan Scrying and/or Reap and Sow to find the missing Urza land) to cast Tooth and Nail with entwine, putting some ridiculously large creatures like Akroma and Darksteel Colossus into play quickly.

4 Disciple of the Vault 4 Smother

And lastly, another Goblin Bidding and Affinity. While most players were gunning for artifacts, Kataoka prepared for the mirror match by adding Goblin Incinerators to his Bidding variant. This Affinity deck relied on speed more so than most, with Welding Jars, Teeth and Scales in addition to Ornithopters to make for extremely explosive opening turns.

Represented by three decks in the top 8 including the winner, Goblin strategies certainly proved strongest in this tournament. Affinity and White Control are a close second at two decks each (if you bundle up mono-white with blue-white), and an oddball Urzatron deck joins the mix. There should be plenty of food for thought for your upcoming Standard events.

Over the last month we've seen a number of Standard decks out of Asia. It would be interesting to see what kind of technologies players from Europe and North America are coming up with at the same time. If you ran or participated in a large-scale Standard tournament, please e-mail me the deck lists and I will strive to include the information in future columns.

What cards were printed in Beta, but not in Alpha?

Circle of Protecton: Black and Volcanic Island were both missing from the Alpha print run. There were also only two versions of each basic land printed in Alpha. A third version was added in Beta, making a total of seven new cards added.

“This is an old one from way back at JSS '00. My match ends quickly and I head over to the sidelines to watch Anthony Vennucci as he starts game 3. Anthony led on the play with Ritual-Negator against his opponent's accelerated U/W control deck. His opponent played a land and passed it back. Anthony swung for 5 and played a Flesh Reaver. His opponent played a Grim Monolith. Anthony played a Twisted Experiment on his Reaver and attacked for 12. His opponent untapped and cast Treachery on the Negator.

It looked like Anthony had it in the bag. His opponent had the choice of either dying, or blocking the Reaver and saccing his board. Anthony attacked and his opponent blocked, impatiently asking if the 7 damage to the Negator was on the stack. Anthony confirmed, and his opponent Disenchanted the Treachery, pushing the Negator to the other side of the table. Anthony thought for a long while, took 7, scooped up his permanents, and went home shortly after.”

“Last Friday I was playing Friday Night Magic with my WW Equip deck. I won the first round and proceeded to face a guy with a Mono Black Control deck. Well, it was a cool game and it stood at 1-1 when everything looked like I was going to win the match. He was at 3 life, but had a 6/6 token made by Promise of Power in play. I had a White Knight in play which was so equipped that it could deal 9 damage. He had a full hand of 7 cards. I was at 13 life so he couldn't kill me on his turn. Instead, he played a Visara and passed the turn to me... As you can guess, I finished him. Then, someone standing next to him looks at the player's hand and sees this card: