Round 1 Feature Match: Saletta vs. Babar 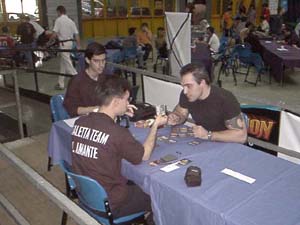 Two curious facts about this match: on one side, Babar Team, we have three Pro Tour players led by the first-ever Italian Champion Ivan Curina and on the other side a team of judges with two Level Three judges and a Level Two judge. A second, and more personal, curiosity is that I finally got to meet Massimo Varrone with whom I had previously traded mails about Magic articles. We will try to follow the game between Ivan Curina and Giuseppe Amante while keeping a close look on the other two.

As soon as the game started all three tables lapsed into silence ending the friendly, and loud banter, between the six Italians. Ivan played a Stormscape Familiar and then a Silver Drake to save it from the incoming fumes of a Plague Spitter. Giuseppe dropped a Hooded Kavu and seemed wiling to race, an invitation that Curina took dropping a Glimmering Angel to increase his flying squadron. At this moment the seat C first game ended with Ezio taking the first, extremely fast game. In the middle table Massimo and Fabio seemed locked in a huge creature stall.

Amante lost his Kavu to a Tower Drake but replaced with a much bigger trouble: Nightscape Master. The Master got bounced by a Recoil that nailed a Mountain and Curina's flying armada sailed in to put the young judge too behind in the race to mount a comeback. He drew his card and conceded.

With seat A table still immersed in sideboarding Massimo seemed in control of the middle table with a Nemata, Grove Guardian. While the Guardian itself was tamed by a Benalish Trapper the rest of the army, and any Saprolings that Nemata can spawn, powered by a Power Armor put Fabio Borello in dire straits.

Ivan and Giuseppe finally began their second game while in the far side Maurizio and Ezio traded creatures for removal. Amante came out flying with a Phyrexian Battleflies and a Hooded Kavu. Curina calmly Excluded a Caldera Kavu and dropped a Phyrexian Slayer to traded for the Hooded Kavu.

In the middle table Fabio skillfully created a large wall of blockers trying to shift the tide. While I looked away Giuseppe again dropped his bomb: Nightscape Master. Ivan had no immediate solution and decided to simply add a Zanam Djinn to his Glimmering Angel. Amante, however, was in no mood to be stopped Terminating the Djinn and swinging in with a Urborg Drake and the ever-toiling Phyrexian Battleflies.

The Battleflies got blocked by the Angel and bounced back with the Master after dealing damage. Despite Ivan's best efforts his creatures were no match for the devilish tricks of the aptly-named Master. In the far table a timely Magma Burst, with kicker, by Maurizio turned the second game in his favor while Massimo and Fabio still crawled through the first game.

Meanwhile Ivan and Giuseppe were already hurting each other as a Hooded Kavu traded blows with a Glimmering Angel and Tower Drake. Amante made up for that disadvantage in fire power with a Bog Down, no kicker, and a Duskwalker, with kicker. In the middle table and despite a valiant effort by Fabio Borello Massimo's insane array of big monsters won the game.

Giuseppe's efforts to play catch up were hampered by a Recoil in the Duskwalker and the Gating of his next blocker: Lava Zombie. Ivan quickly rubbed salt in his wounds with a Spinal Embrace in the Zombie. At two life facing two flyers Giuseppe took a long time to think of a solutions but could not do better than concede.

Since the table B seemed to be the center of the match we moved the coverage over to that table to see Fabio's Samite Archer and Stormscape Apprentice facing a Llanowar Knight, Pincer Spider and a freshly casted Power Armor in the early stages of the second game.

A Hunting Drake came in to bounce the Spider and give Borello some respite and Massimo a lot of food for thought. The last table was the antithesis of this slow game: Ezio's small Black and Red creatures tried to slow down an Ancient Spider and a Rooting Kavu.

Back in the middle table a Fires of Yavimaya from Varrone drew some loud moans from an unbelieving Borello. He hit back with his Darigaaz's Attendant and played a huge Waterspout Elemental murmuring "Obviously without kicker". Massimo tried to maximize his Power Armor-Fires of Yavimaya combo with a unkicked Benalish Lancer.

While both players traded blows the Ezio-Maurizio game ended when the horde of small Black-Red creatures run over, or around, the much bigger Rooting Kavu and Ancient Spider rendering the last game useless for the match score.

Again the creature count climbed with a Kavu Climber on Massimo's side and a kicked Benalish Lancer and Dream Thrush on Fabio's side. His two flyers ruled the skies steadily bringing Varrono's life totals to the dreaded zero.

Game 3 of Massimo vs. Fabio game

While the crowd increased they finally finished sideboarding and Borello dropped a Samite Archer. Unfazed Massimo used a Harrow to get his fourth color and played his own golden power card: Fires of Yavimaya. He kept up his Standard Fires impersonation by dropping a red kicked Thornscape Battlemage killing the trickster Archer.

Fabio played a Sea Snidd to stop the Battlemage but Massimo dropped another bomb: Power Armor! After a few joking complaints from Fabio about how lucky his opponent was he used a kicked Dismantling Blow to remove the troublesome artifact and draw two cards.

The next hasted beast was bigger than the defending Snidd: a kicked Benalish Lancer. Fabio however had a his Lancer and his also played with kicker on the following turn. That was not enough for the bombs Massimo seemed to be peeling from his deck. The next one was Nemata, Grove Guardian!

But all was not lost because Fabio found a miracle answer: Wash Out for Green! With the round now over, Massimo had to find a way to deal the final eight points during the five extra turns of each he would get only two. Amidst loud jokes from the gathering crowd Borello fought back Massimo's efforts snatching a draw from a very, very scary deck.