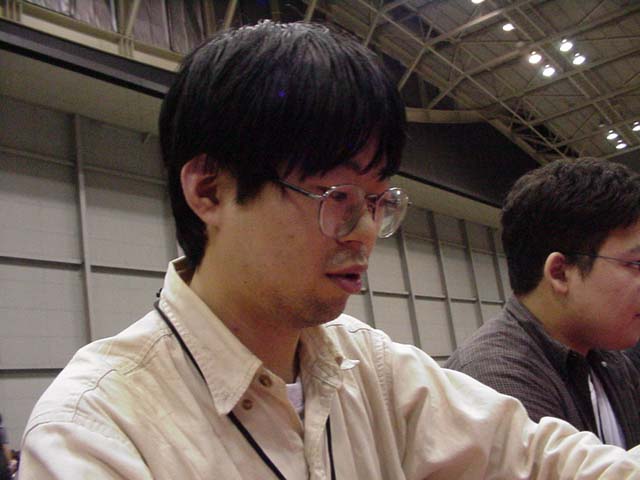 Fujieda Laboratory's Sasanuma Kiyoshi Kiyoshi Sasanuma, whose best previous finish was at the 1998 APAC Championship, is known as the "Japanese Zvi" for his innovative deck designs.

Sasanuma started Game 1 with a double mulligan, keeping a five-card hand that miraculously had three land.

The first spell played was a Nomadic Elf by Hiroshi when he had two Forests. Sasanuma showed that the mulligans couldn't stop his mana development and played a Mountain to go along with his Island and Plains. However, even having all three of his colors available to him on the thirds turn wasn't enough to let him cast a spell, and he got hit by the Elf, after which Hiroshi played another 2/2 creature.

Sasanuma's first spell was a fairly anemic lashknife barrier, and he had been hit down to 14 by the time that Hiroshi played his third creature, a Quirion Trailblazer, getting a Plains to go with the Mountain he'd drawn to give him easy access to all three of his colors without having to use the Elf as anything but a brute.

Sasanuma's first creature was a Sawtooth Loon, which helped him in terms of card quality but gated itself out of the field of play before it could do anything about the onslaught. On the next turn, he played a more useful "gater", the Hunting Drake, which bounced Hiroshi's Trailblazer back to the top of his library. He then used the drake to kill the attacking Nomadic Elf (thanks to the power of the Lashknife Barrier, making his Grizzly Bears better than his opponent's.), leaving Hiroshi with only the Kavu and the recast Trailblazer on the table, and leaving himself at 9 life.

Showing a taste for combos, Sasanuma displayed a flurry of action, playing a Stormscape Familiar, followed by his now-cheaper Sawtooth Loon, which gated his Drake back to his hand, followed immediately by a Cavern Harpy, which gated the Familiar.

Hiroshi also had a powerful gater in hand, as he put out a Sparkcaster, which was promptly Hobbled on Sasanuma's turn. Hiroshi showed that two could play at that game, playing Shackles on the Sawtooth Loon, and using Steel Leaf Paladin for even more gating action, returning the Sparkcaster to his hand.

At this point, Sasanuma tired of all the fancy gating tricks and played Dromar, the Banisher, giving him an awesome flying army of a Dragon, a Familiar, a Harpy, and a Shackled Loon. Undeterred, Hiroshi put the Sparkcaster out again, returning the Trailblazer; he then replayed the Trailblazer for what seemed like the tenth time in the match.

After some extensive calculations, Sasanuma attacked with the Harpy and Dromar, choosing to banish all of Hiroshi's green creatures. Going into panic mode, Hiroshi drew a card off of Aggressive Urge before losing all but one of his creatures in play. Sasanuma brought back an old friend, the Hunting Drake, to get rid of the remaining red creature, and things looked good for him. So good, in fact, that Hiroshi conceded.

After Sasanuma came back from a double mulligan in Game 1, Hiroshi got into the action, taking a mulligan to start off Game 2. Sasanuma's start was much faster this time, as he started with the Stormscape team, playing the Apprentice on turn 1 and the Familiar on turn 2. Then he got tired of that and played a Samite Elder, which died to Tribal Flames before she could cause trouble for Hiroshi.

Of course, Hiroshi's missing Tribal Flames could be considered "trouble", since it meant that Sasanuma's Benalish Heralds could live unmolested. Although the next few turns saw Hiroshi play a series of ground-pounders while Sasanuma contented himself with drawing cards and playing the occasional Sunscape Apprentice, a Vodalian Serpent slowed down the attacks sufficiently. An Angelic Shield also served to strengthen his creature base without actually giving him extra creatures.

In a standoff, it seemed like Sasanuma's deck would win out, since he'd eventually get to Dromar. And he did, immediately after Sawtooth Loon sifted it to the top. Hiroshi's Primal Growth failed to kill Dromar immediately, and it did six damage while incidentally wiping the opposing board clean.

Sasanuma considered his hand and his options at length. He finally decided to even out his board, playing two Nomadic Elves and a red creature so that Sasanuma would have to decide what color to remove.

Instead, Sasanuma played a Nightscape Battlemage and a Rushing River, ending Hiroshi's hopes for a comeback and giving his team a 3-0 win.