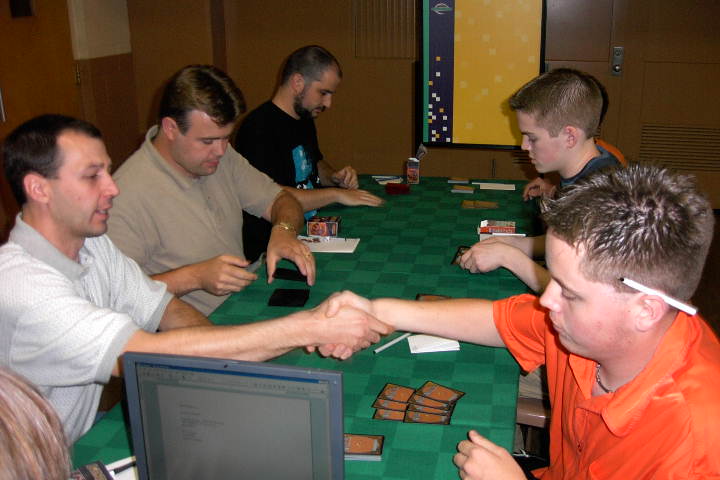 Anthony Alongi has been telling the story of his team - Mom has the Kids . . . Again - on the Sideboard for months now. The Minneapolis-based team that limits itself to guys with wives and kids has been practicing extensively, but now they're back is against the wall. Grand Prix Columbus is their last opportunity to qualify for the Pro Tour. Alongi told me before the round began "we can't complain about our decks. We're very happy with all three of them." However, they may not have been happy against a fairly tough first round pairing against Six Degrees of Kevin Bacon. "Bacon" is three guys from St. Louis, two of whom have posted impressive Grand Prix results. Kyle Kloeckner finished 3rd in Memphis while Mike Heffern captained the second place team in St. Louis. 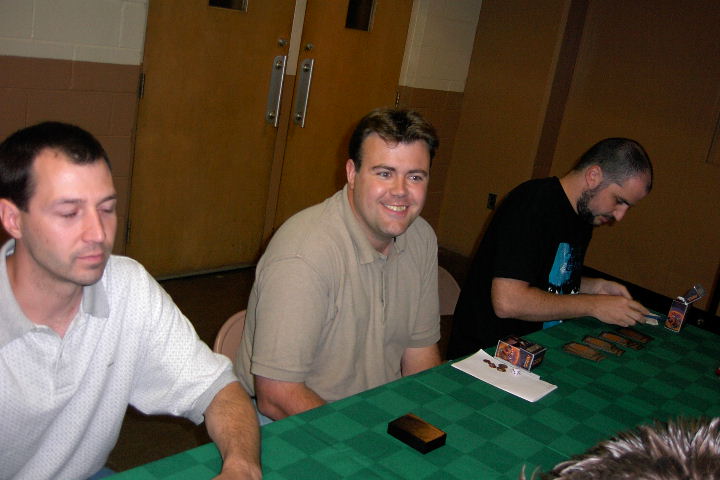 Interestingly, both teams divided up their cards into a 5-color green deck, a red/black deck, and a blue-white control deck. The only difference was that Mom has the Kids . . . Again splashed black in their control deck.

Kloeckner had to mulligan in game 1 against Bob Drosky's 5-color green deck and then all he drew was islands. His Stormscape Apprentice had to sit there and watch while an Armadillo Cloaked Mirrorwood Treefolk beat him down to 2. When that Plains finally showed up, the Tree got Hobbled and now the Apprentice could shut down Drosky's new Fungal Shambler. Drosky had to wonder if he should have busted the Shambler out earlier, possibly by sacrificing his Irrigation Ditch for a burst of speed. Instead he had tried an Aggressive Urge that would have sent Kloeckner to 1 but instead allowed him to draw a card from Confound. Kloeckner continued to draw plains and suddenly his board included two tappers, a Standard Bearer, and then a Sunscape Master. Drosky now needed to draw direct damage to win. He had a bunch of turns since his early Cloak sent him up to 36 life. His problem was he didn't have a single direct damage spell in his deck to draw - they had given them all to Alongi. Kloeckner had Prohibit ready to defend himself the hole time anyway. Kloeckner's Faerie Squadron and Rainbow Crow were soon joined by Living Airship and Kloeckner's miraculous comeback was complete.

Alongi ran a 2-color red/black deck and faced a mirror match against Nick Weber. Alongi couldn't deal with Tahngarth, among other things, and quickly fell behind 1-0. Mike Heffern also took game 1, completing a sweep of game 1's on behalf of Six Degrees of Separation. Tahngarth came out to play again in game 2 for Weber. So did Reckless Spite and Bacon was suddenly up a match. 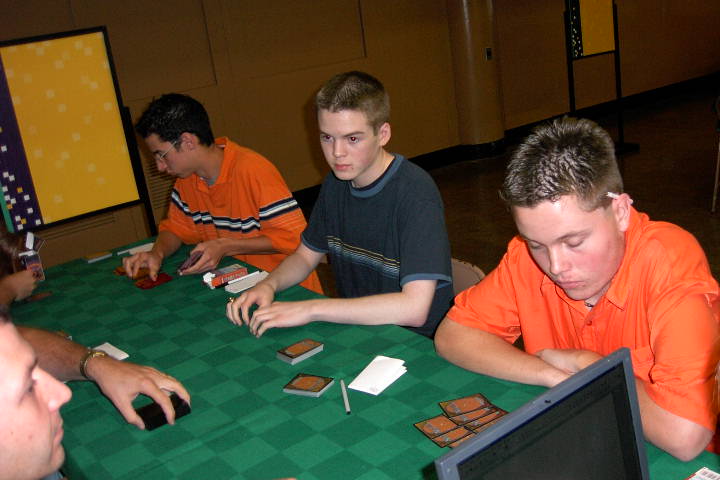 Heffern put a lot of tokens into play during his second game against Petit. Two early harrows allowed him to play both Ordered Migration and AEther Mutation during the early turns of the game. Petit's Rushing River undid some of the damage and dealt with Heffern's Armadillo Cloak, but Petit just couldn't stabilize.

Game 2 between Drosky and Kloeckner wasn't close. Despite playing only two colors, Kloeckner's card quality seemed at least as high as Drosky's. Drosky couldn't deal with any of Kloeckner's annoying utility creatures like Samite Pilgrim, Sunscape Master, and Benalish trapper.