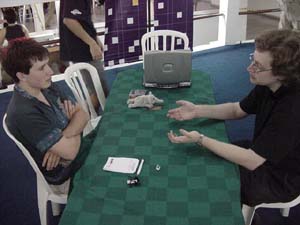 The Magic Shirt Voodoo finally ran out on Rafael last round and he lost the match. Now he is facing the face archetype, Finkula, in the more than capable and experiment hands of Alex Shvartsman. They are both on the right way to the Top 8 and a win here will almost seal the deal for one of them.

They had a few extra moments to talk about the Pro Tour while the judges stole their decks for a deck check. The decks came back ok while they chatted about the Extended format and possible deck choices. Despite the often bad fame of Pro Tour players these two are a fine example of two very nice Magic players.

A Tithe gave Alex the perfect mana for a turn two Gerrard's Verdict getting Force Of Will and Gaea's Blessing after Rafael tapped mana to Impulse.

Le Saux had a land light hand so he tapped out to play a turn three Call Of The Herd and the American again ripped his hand with a Verdict getting a Morphling and a Counterspell this time. He then turned his attention to the Elephant tokens, Swording the first and Vindicating the second one.

The Chilean used a Wasteland to deny Shvartsman his Black Mana but he just dropped an Underground Sea. With a Seal Of Cleansing Cursed Scroll and Spectral Lynx the American was pretty confident about the game at this point. Le Saux could only use card-drawing spells to dig deeper looking for a wait out of his mess. A Seal took out the Scroll and the third Impulse finally revealed a Swords To Plowshares, but the Chilean picked a Brainstorm.

With it he found two counters but that didn't solve the constant pecking of the Lynx. Alex tried to open way for a Mage with a Duress and Rafael used his fourth Impulse. Ironically enough that got him a Wrath Of God. Alex took the Wrath and named Force Of Will.

Le Saux drew his card and reviewed his mana finally playing a Fact Or Fiction drew a laugh from him and a "very nice" from the American.

Pile one: Counterspell, Fact Or Fiction, Seal Of Cleansing
Pile two: Cal Of The Herd, Wrath Of God.

The Wrath was too much to resist and the Chilean took it. On the next turn he played it and Alex couldn't stop it. The table was again clean and they lapsed into a Draw-Go period that didn't bode well for Shvartsman's chances. The next two creatures (an Elephant and a Finkel) got promptly Vindicated and Sworded out of the way. 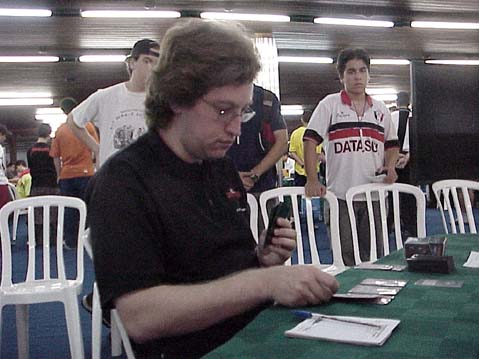 The flashbacked Elephant hang around a lot longer as the American was out of gas with a hand full of lands and a Duress. To keep up with his card drawing theme Le Saux launcher a second Fact Or Fiction.

Pile one: Force Of Will and Wasteland
Pile two: Brainstorm, Plateau, Counterspell

The number one pile went into the Chilean's hand and the game seemed all but over. A Gaea's Blessing recycled his Fact Or Fictions and he resisted a Duress only to let Alex Vindicate his Elephant. The third Fact Or Fiction got him a Wrath Of God and an Adarkar Wastes and his hand seemed unstoppable at this point.

Just like a real elephant herd Dumbo went racing through the table with a FOURTH Fact Or Fiction giving the Chilean Gaea's Blessing and a Call Of The Herd. The only thing possibly stopping him from winning the game was is fast dwindling library. He got himself two Elephant tokens and let the first Finkel, but countered the second one.

Two draws later the American packed his card with his eyes on the clock: they had spent twenty-five minutes on their first game and he needed to get a move on if he wanted to win this round.

They shuffled at an impressive rate and Alex kicked of the second game with a hand containing three Meddling Mages. The first named Swords To Plowshares and the second one Call Of The Herd.

The Chilean had just found a Wrath Of God but the third Mage locked that up as well after Alex's Pyroblast stopped Rafael's Force Of Will. The fix was in. The three Mages where basically shutting Le Saux out of the table and a Vindicate convinced him to concede.

If the first game showed Dumbo at his best the second one had just shown what Finkula can do with a great draw.

Alex allowed himself a sigh of relief and looked at the clock still giving them nineteen minutes to finish the round (including the extra five from the deck check). They slightly retouched their sideboards and again launched into the usual silent shuffling mantra.

Le Saux had to take a mulligan and kept a hand with two Counterspells. Being the nice guy he is Shvartsman decided he might as well take a mulligan as well before keeping a tough second hand. 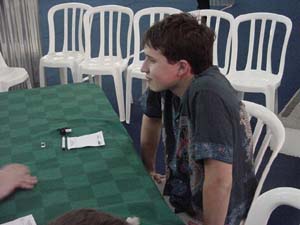 His first play was a Spectral Lynx while Rafael went through his usual card drawing, mana fixing motions. He got himself a nice turn three Elephant and Shvartsman spent three mana on a creature as well, but a more impressive one: Finkel.

A visibly upset Rafael had to let in a Meddling Mage locking up Wrath Of God as the Infiltrator gave Alex a few extra cards. Despite the three Counterspells in his hand he hand no answer for the problems on the table, each of Alex's creatures was problematic in its own way.

Two Swords took out the Elephants (the flashbacked as well) raising Le Saux's eyebrows. The American dropped a second Finkel and if he could find some counters he had the game all locked up.

Two Duresses broke through Le Saux's hand revealing his Counterspells. He drew a Pyroblasts and used to blow Pikula, unlocking Wrath but he was now at six, two swings away from losing the round.

Shvartsman's blew up one of his White Mana sources and Le Saux desperately Sworded the Lynx to survive. The final table told the tale of the game: the Finkels had given Alex all the extra gas he needed to win the game.

Rafael's first comment to his friends as he left the area said it all: "Did you see that? He must have a pact with the Devil!"

It was a very popular game, not only because of the two players, but also because of Alex's deck. A collection of black-bordered, foily, exotic language cards that drew the attention of the crowd an even the judging staff.