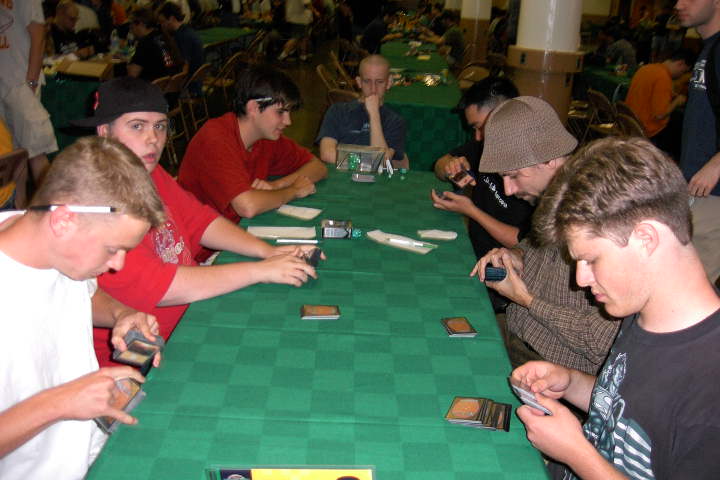 The final round of the final team grand prix of the season featured a team of accomplished PT veterans against a team of relative newcomers. Dynasty (Ben Rubin, Brian Hacker, and Gab Tsang) had been on a roll all weekend, and only needed one more win to advance into the top 4 playoff. Team $20 Dollar Billz (Eric Duewel-Zahnise, Pete Ripley, and Brendan McKay) has also had an impressive run of the Grand Prix, and was playing for a top 4 slot as well.

On the other side of the table the draft was going fine as well. Eric started off his draft as the A player with some great picks in both white and black. It looked like he was probably going to end up being U/W, but he used several early picks to hate draft some good black cards, such as Reckless Spite, from the other team. The B player for the Billz, Pete Ripley, started of the draft by taking green. Cards like Serpentine Kavu and Kavu Climber marked him as the Billz's green player. Brendan (player A) started off with a number of strong B/R cards. He seemed excited when he was shipped a second pick Skizzik from Rubin who took a Benalish Heralds over the trampling fatty. 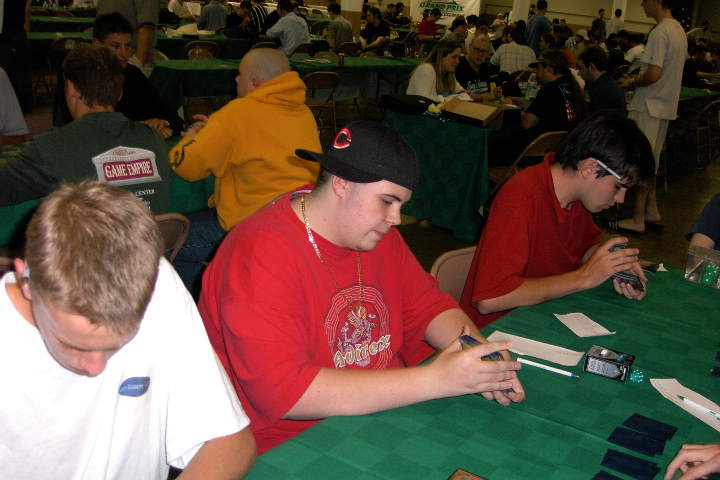 It seemed like things began to fall apart for the Billz in Planeshift. Dynasty opened a number of solid cards, and the Billz missed out on a Samite Elder that would have been perfect in Eric's deck as he would be playing the mirror match. Instead the Elder made it all the way back to Rubin, who seemed delighted to receive the tasty treat. When the Planeshift packs were finished, both teams had cracked a Magma Burst, Brendan received a Flametongue Kavu, Ripley had ripped open a Phelddagrif, and Tsang had picked up two Terminates.

The Apocalypse packs lead to the color switches that are most common when the non-allied color set comes along. Ripley ripped open another platinum hit in this round of packs, and did not hesitate to draft the Spiritmonger that he was presented with. The two B/U mages both started dabbling into red a little more, with Eric picking up Quicksilver Daggers, and Rubin getting a Jilt. Hacker was able to pick up two Manacles of Decay, which was very important as they allowed him a way to deal with Spiritmonger and Phelddagrif. Tsang rounded out his B/R deck with a few solid cards like Phyrexian Rager, and Brendan was able to add a few solid choices to his B/R deck as well.

The match itself was very interesting. In the Tsang vs. McKay matchup, Tsang took the first game easily. The second game involved McKay playing a Fervent Charge, a card that Dynasty had laughed at during the draft, and using it to make his 1/1s and 2/2s into 3/3 and 4/4 beaters that served it up for the win in about five minutes flat. Game three was all Tsang though, as he played a turn two Thunderscape Familiar and used the mana acceleration to play out a bunch of bears while all McKay could do was sit there waiting until he had five mana to cast his Zombie Boa. It wasn't enough though, and Tsang swung through for the win as McKay was already at low life. 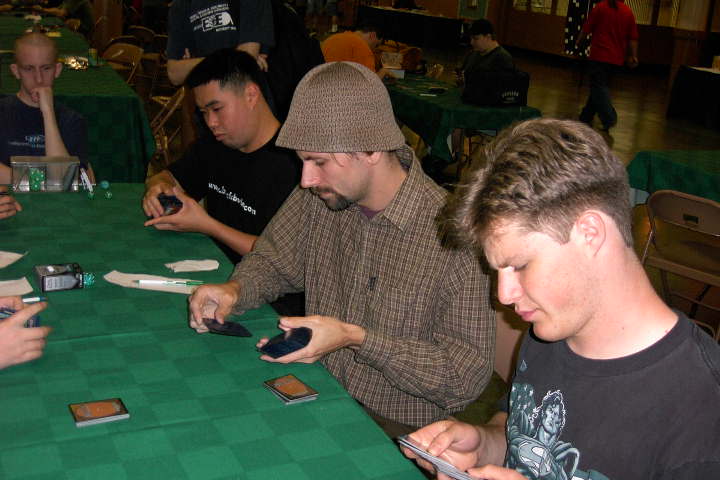 The Hacker vs. Ripley matchup was all about Ripley getting mana screwed game one. Hacker used his ground pounders to mash the face of Ripley into the ground as he waited to draw land. It came to late, and it was on to game two. Game two was all about Ripley's bombs. The Phelddagrif and the Spiritmonger both hit the board this game, and Hacker had no answers for them as the ridiculous feathered hippo flew over for the win. Game three involved Hacker Aura Blasting Ripley's Fertile Ground, leaving him with the wrong colors of mana, as well as slowing him down. Once the creatures of Hacker started hitting the table Ripley had no chance to recover. After attempting a Dead Ringers only to have it be useless because of a Flagbearer, Dynasty was into the top 4.

The Rubin vs. Eric DZ matchup was one that was all about the air. In the first game, Rubin mulliganed, and Eric came out fast using his air armada to slowly pick away at Rubin's life total. He then enchanted his Sunscape Familiar with a Quicksilver Dagger, and Rubin conceded at low life with no hope of winning. Games two and three were irrelevant as Hacker had already won his match as well, giving the win to Dynasty, however, the two played it out, and after losing game one, Rubin was able to take games two and three with his Silver Drakes and bounce, which turned out to be too much for Eric to handle.