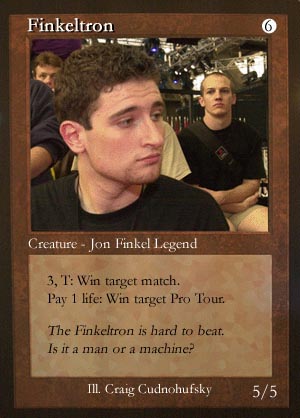 2000 Pro Tour New York Winner Sigurd Eskeland and German PT veteran Stephan Valkyser faced each other in the first round of the second draft. The two of them had drafted next to each other, Stephan feeding Sigurd during the first and the third pack. Stephan had picked white and blue, and he had several strong cards like Ramosian Sky Marshall, Stronghold Zeppelin and several rebels. Sigurd had also chosen blue as Stephan had passed him an early Drake Hatchling, but naturally the blue had somewhat dried up for him and he had started wandering into other colors before eventually settling for green when he opened up a Blastoderm.

"I'm gonna get revenge for 1940," Sigurd joked as he sat down, referring to the German invasion of Norway during World War 2. The tone at the table was really friendly, though, and the match turned out to be really entertaining.

Valkyser won the coin flip, and he opted to play first. He played a turn one plains, a turn two Ramosian Lieutenant and a turn three Timid Drake. Eskeland lay a turn one forest, a turn two Cloudskate and a turn three Ribbon Snake, bouncing Valkyser's Timid Drake back to his hand. He then started attacking with his two flyers before slapping down a Blastoderm on turn four.

Once at four mana, Stephan started using the Lieutenant's ability. He dug out a Defiant Vanguard and then cast his Ramosian Sky Marshall, and the creatures blocked the Cloudskate and the Blastoderm. Thus Sigurd lost some of his offense, but he started building his army again by casting a Drake Hatchling, a Spore Frog and then a Pygmy Razorback. Meanwhile Stephan cast a Shield Dancer, searched for a Lightbringer and then summoned a Blockade Runner that started breaking through Sigurd's line of defense.

When Stephan again activated his Lieutenant to search for a Rebel, Sigurd made a key play. In response, he cast Submerge, targeting the Ramosian Sky Marshall. Thus the Marshall was shuffled back into Stephan's library. Sigurd was then able to continue his attack through the air. His Wandering Eye was Rethought, though a Cloudskate joined the Ribbon Snake and the Drake Hatchling on the table.

Stephan continued sending the Blockade Runner over each turn by making it unblockable. He also re-cast the Timid Drake and Toppled the Thrasher Beast Sigurd put into play. Sigurd had a Verdant Field, though, and enchanting one of his lands, he was able to attack with all his flyers to bring Valkyser to two life. Stephan finally got the Ramosian Sky Marshall back into play during his turn, and he also Disenchanted the Verdant Field so that Sigurd wouldn't be able to take more advantage of it.

But during his next turn, Sigurd sent all his creatures over in a last attack. Stephan was able to block all the creatures, but Sigurd Wild Mighted his trampling Pygmy Razorback to finish him off.

Stephan chose to play first in the second game as well, and again, he cast a second turn Ramosian Lieutenant followed by a turn three Alabaster Wall. Sigurd got out a turn one Spore Frog though, and then a turn three Ribbon Snake that got through one single point of damage before it was neutralized. The Norwegian also played a Chimeric Idol and a Verdant Field that was Disenchanted, and after that, it all stopped up for Sigurd.

Stephan cast a Defiant Falcon and started hitting for one each turn. He then got out a Ribbon Snake, the Ramosian Sky Marshall, and after getting Sigurd down to four measly life, Sigurd scooped and started shuffling for game three.

Eskeland finally got to play first in the third and deciding game, and he went beatdown from the start. A turn two Cloudskate, a turn three Cloudskate and a turn four Pygmy Razorback while Dazing Valkyser's turn three Defiant Vanguard is a pretty good start.

Stephan took a lot of damage from the Cloudskates, and when the two Skates were dead, he had an Oraxid and a Ramosian Lieutenant in play and seven life only. At this point, Sigurd had summoned a Wandering Eye, so it didn't come as a surprise to him when his Ribbon Snake was countered. Instead, he played the Spore Frog that would turn out to be amazing in the game.

With all the cards face up on the table, Sigurd saw that Stephan had a good draw. He got several good creatures, among them a Stronghold Zeppelin and a Blockade Runner that he summoned to start his offense. In addition, he drew the Ramosian Sky Marshall and a Spiketail Drake. The Sky Marshall was, not really surprisingly, countered by Sigurd's Rethink, but things didn't really look that good for Sigurd as Stephan was building a small army.

However, Sigurd topdecked a Saprazzan Breaker and cast it. During Stephan's next turn, time was called, and the German realized that there was only one way he would win; by Toppling the Breaker. He activated Soothsaying for six, but the Topple wasn't there. Still, Sigurd had to rely on having lands on top of his library. He activated the Breaker once, and got a land. Sending the Breaker over for four, he got Stephan down to one measly life, and, turning over another land during his second extra turn, he could attack again for the victory.