Round 10: Your Move Games vs. Rug Doctors 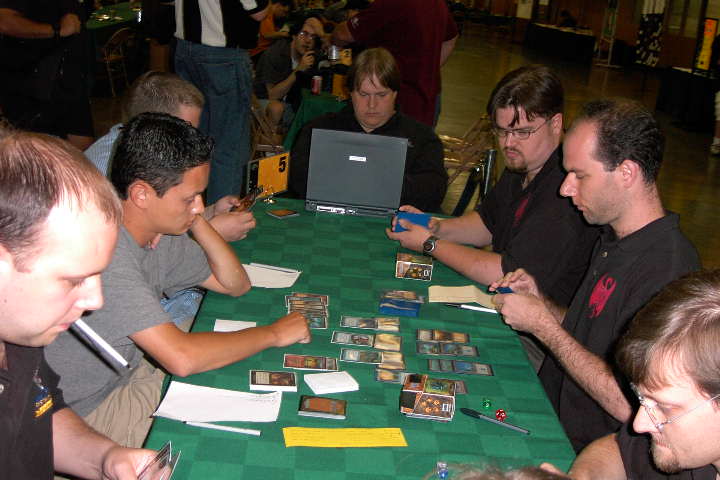 Your Move Games vs. Rug Doctors

Every North American Grand Prix there seems to be yet another unknown player from Madison, Wisconsin who does well. Whether it's Mike Hron, or Dustin Stern, or Kurtis Hahn, players from Bob Maher's circle of friends keep doing well. Adrian Sullivan and Brian Kowal also number among this group. For Grand Prix Columbus the role of unknown Madison player is being played by Rug Doctors - Matt Severa, Bob Allbright, and Ben Kellerstrass. Allbright has known Maher since before they played Magic and Kellerstrass was a groomsman in Maher's wedding.

In the final round of the Grand Prix, the Rug Doctors found themselves seated across from Your Move Games for one match that would determine which of them advanced to the finals and which of them would be eliminated in the Swiss. YMG actually hasn't lost yet this weekend, but their two draws have hurt them immensely. The unintentional draw has long been their nemesis - 4 of them at the last team Pro Tour eliminated them from contention despite the fact that they only lost once.

The draft was fairly uneventful. YMG chose to force the Rug Doctors to go first and then everyone settled into the mirror matches than have become familiar over the course of the day - black-red on the right, blue-white in the middle, and green on the left. Both Severa and Darwin Kastle added a healthy number of blue cards to their black-red decks, though neither got paid off in Apocalypse with a Jilt. Both Allbright and Dave Humpherys mixed in a splash of black with their blue and white card (with Allbright also adding in red for Raka Sanctuary). And both Rob Dougherty and Kellerstrass are running 5-color green decks with very high quality spells from a variety of colors. The matches should come down to who plays better and who has developed a better understanding of these mirror matches and possible who has developed "tech" that can give them an edge in these mirror matchups. 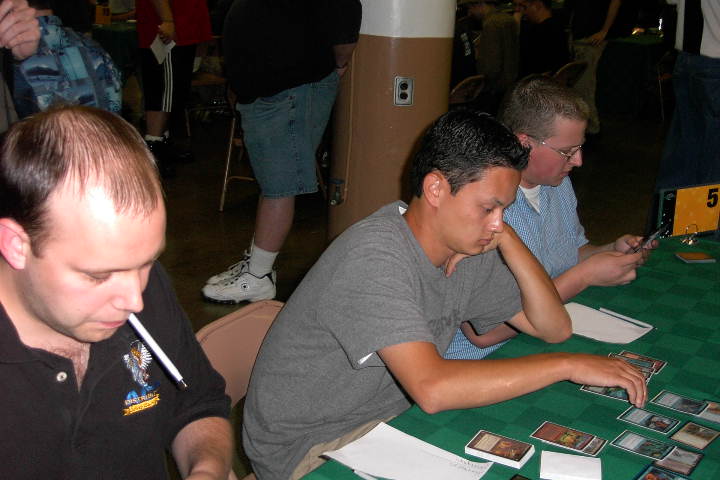 Kastle and Severa traded blows and removal spells for a few turns and then Severa played his Fact or Fiction, revealing Hypnotic Cloud, Terminate, Zombie Boa, and two land. Kastle had Zanam Djinn in play and 3 cards in his hand. Severa had 6 lands out already. Kastle split then and Severa opted for Terminate, land, land instead of the 3/3 and the Cloud. He was more interested in removing the 5/6 Zanam Djinn than knocking Kastle's whole hand away. With Recoil already in his hand, it wasn't at all obvious to me that Severa played this correctly. The way the game played out, Severa drowned under a flood of 12 lands while Kastle abused him with anti-Kavu technology. Kastle made sure his team let him draft both Shoreline Raider and Coastal Drake because he wanted them against Severa's red creatures like Caldera Kavu. The Raider plus the Drake made it impossible for Severa to keep enough blocker in play to stay alive and game 1 went to Kastle.

Allbright had a full strength Raka Sanctuary up and running in his first game against Humpherys, but Humpherys completely negated it with Coalition Honor Guard. Even Lashknife Barrier couldn't save Allbright from an air force of Silver Drake and Living Airship. Allbright did draw Rushing River, which allowed him to bounce the Honor Guard briefly and kill the Silver Drake, but Humpherys just replayed his guys and soon clinched game 1.

The second game between Kastle and Severa was remarkably fair - Kastle played without a Mountain while Severa played without an Island. Kastle drew less red cards than Severa drew blue cards, though, and got out enough "stupid grey ogres" to win the game. 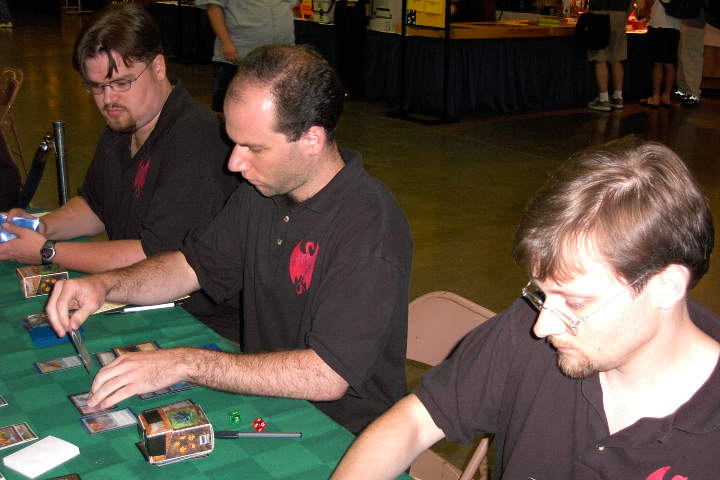 Urborg Elf fueled a turn 4 Shivan Wurm for Kellerstrass, but Dougherty was able to triple-block safely because one of his blockers was Coalition Honor Guard. The game stalemated after that with Phyrexian Bloodstock playing defense for Dougherty against a Coalition Honor Guard and a couple of green dorks for Kellerstrass. Kellerstrass seemed about to break the stalemate with Benalish Trapper, but Dougherty answered with doubly kicked Necravolver. Kellerstrass asked at this point how his Trapper interacted with his Collective Restraint and learned that it wasn't great for him. The mana is paid as creatures are tapped, so if he wants to tap anything, he has to do it before Dougherty pays any mana.

Humpherys had another decent sized air force charging over in game 2, but Allbright hurt him when Dead Ringers took out both Living Airship and Whirlpool Drake. Now Allbright's Atalya and Stormscape Apprentice could keep him locked down. The game stayed bogged down for quite a while. (So too did game 1 between Kellerstrass and Dougherty.) Allbright got his Raka Sanctuary out again, but Humpherys once again had his Coalition Honor Guard shutting it down. Humpherys slowly, deliberately whittled away at Allbright's creature base with Sawtooth Loon and Stormscape Battlemage. Allbright didn't have any answers and Humpherys soon clinched the match and sent his team into the finals.