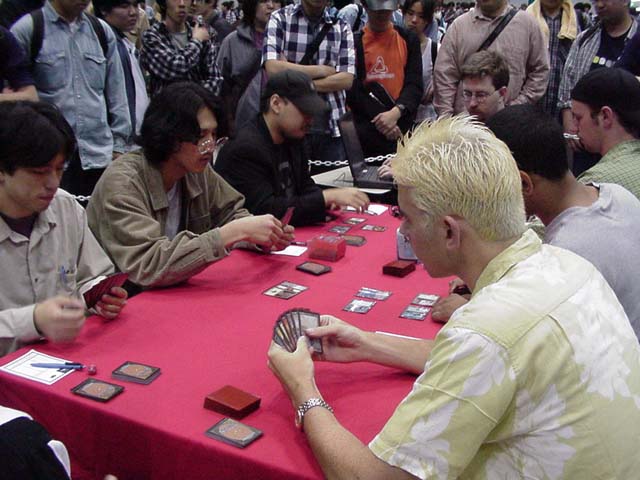 Ryan Fuller, described by some as the "hottest player on the Pro Tour," had to face dual Shivan Zombies with his green-white deck when former Japanese National Champion Masayuki Higashino got a quick start in the last swiss round of Grand Prix Yokohama. It's probably not relevant, but both of these players are known for constantly wearing baseball caps, although Ryan's is usually backwards.

Luckily for him, Fuller's early creatures were all green, and he was able to help them along by washing some mana through his Nomadic Elf and casting an Angelic Shield. The insolence by the Elf got to Higashino, and he Repulsed the Elf, which Fuller commented was "better than Recoil".

When the Elf came back to play, Higashino was ready with a more permanent answer: Shivan Emissary with kicker. Deprived of his trusty Nomadic Elf, Ryan was forced to play a different 1G 2-power creature: Thornscape Familiar. Disdaining the Familiar, Higashino killed the Pincer Spider with his kicked Stormscape Battlemage. The Spider was saved by the Angelic Shield, but the important part to Higashino was that a card was destroyed.

At this point in the match, team AlphaBetaUnlimited got distracted by the appearance of Mike Long, who was done selling cards for the day. "Good luck winning the tournament," he said as he left the feature match area.

Fuller played an Aurora Griffin, and in response, Higashino played Barrin's Unmaking (so it resolved before Fuller could use the Griffin's color-changing ability) on his own Stormscape Battlemage, loading it up for another blast. The Battlemage's target, when it came back out, was the Pincer Spider, but Fuller had a surprise: Fleetfoot Panther, which not only saved the Spider but provided a convenient 3/4 body.

When both players were at 10, all of Ryan's creatures were powerful (Fleetfoot Panther, Radiant Kavu, Aurora Griffin, Llanowar Knight) but white. And Higashino had a pro-white Shivan Zombie and two Phyrexian Bloodstocks which Ryan didn't dare kill for fear of losing his army.

Ryan took the pain of the attack, going down to 2 with no fear of direct damage. On his turn, he attacked with everything, which would have won him the game if Higashino hadn't Maliced the Radiant Kavu into oblivion. Game 1 went to Higashino.

Ryan played the second game very quickly, as though he hoped his first-turn Sunscape Apprentice could go all the way. It couldn't, but it traded with a Metathran Zombie while Ryan got out other small creatures for the attack. The Armadillo Cloak he got on his Yavimaya Barbarian was an essential part of his strategy, since Higashino got out a combo: Phyrexian Bloodstock and Escape Routes, which could give him a recurring method to deal with white creatures.

Higashino seemed indecisive, tapping and untapping his creatures and land before finally giving over the turn without doing anything. Ten minutes after the game started, Ryan Fuller had won, tying the match.

There were twelve minutes to go in the round when the players started shuffling.

Ryan played aggressively, attacking with his Yavimaya Barbarian and Aurora Griffin even though Higashino had strong blockers in the form of a Phyrexian Slayer and Metathran Aerostat. Ryan's Angelic Shield gave him confidence that creature-trading would go in his favor, and Higashino was willing to simply trade damage back and forth in the middle game.

The Phyrexian Slayer got Hobbled, and the Barbarian got Liberated to avoid a Malice, and things were going Ryan's way. When the Griffin got Repulsed, it came back into play with a Sunscape Apprentice.

As time was called, Fuller won the game with a Breath of Darigaaz.