Round 11: Ryan Fuller vs. William Possato 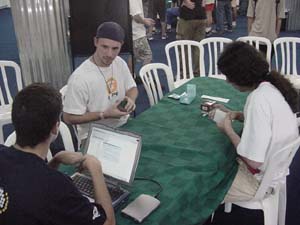 Ryan started his show as soon as he sat down asking if he could say hello to all the beautiful women in Belgium. Sitting at 8-2 right now they both can't really afford to lose here since a loss would force them to win all the remaining rounds for a shot at the Top 8.

The kept their opening hands and William started of with a Mogg Fanatic and a Granger Guildmage. That set things of perfectly for Ryan's Fire/Ice. William played a Cursed Scroll and a River Boa on the next turn.

Still high on life Ryan Intuition for the usual three Accumulated Knowledge before playing a Sapphire Medallion. He took a hit from the Treetop and the Boa and spent a minute considering his options on his turn finally passing the turn without blinking.

Possato tried Rancored his Boa and Ryan's fourth Accumulated Knowledge didn't give him a direct answer for it. He Iced it taking a hit from an Elephant token down to thirteen. William dropped a Guildmage running out of Green mana and Fuller but Fuller didn't have a second Fire/Ice to kill both the Boa and the Granger.

Instead he used Intuition to fish out Donate and gave the Brazilian an enchantment sealing the game when Possato's next draw didn't give him a miraculous solution.

They sideboarded in dead silence and Possato came out with a Lyrist and a River Boa. After a long Brainstorm Fuller put a stop to that plan with a timely Fire that took out both creatures.

William was locked at two lands and out of creatures so he played a Seal Of Cleansing and passed the turn. The Canadian was having no problems at all Merchant Scrolling for Intuition and used it to get the Accumulated Knowledge.

The Brazilian's next draws didn't give him a creature to play so he tried to stop the Knowledge with a Pyroblast but Fuller wanted the cards so he Forced it. If Possato was in trouble up to this point he got into a world of pain in the next turn.

Ryan Fuller played a Ruination dropping Possato down to one permanent: the useless Seal Of Cleansing. That didn't do much against the incoming Morphling. The desperate Brazilian tried to Sworded it but he already knew Fuller had the Force Of Will (from a previous Merchant Scroll).

When Possato revealed his hand to Land Grant Fuller thought he was conceding. He got around to that a few turns later facing two Morphlings, after a second Ruination and an Earthquake. It wasn't really a Magic game, it more likes a bloodbath.