Round 12: Matias Gabrenja vs. Raphael Gunther 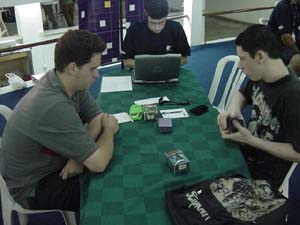 Two rounds away from the Top 8 you can see how shaken players are as soon as they sit down. With Matias at twenty-seven and Gunther at twenty-six they both know how important these round is for their aspirations. In fact they were so nervous Gabrenja needed to run several cards through his pants to dry of the sweat from his hands.

Gunther took a mulligan and played a Seal Of Cleansing giving Gabrenja, who is playing Donate, a nasty problem to solve. Since the Argentinean let the first Seal in without a fight Gunther played a second one, getting a hurt look from Gabrenja. He Fired away two Fanatics and slumped back trying to find his way out of this mess.

Two Seals can be the death of many Donates (those packing only Capsize) and the only way out of this mess for Matias is stroking his opponent out, which seems very unlikely. Still he played on going through the usual "Intuition for Accumulated Knowledge" motions and laying down Sapphire Medallions.

Finally he used the Capsize on one of the Seals and when Gunther broke it in response he conceded with a sigh. The double Seal lock gave the firs game to the silent Brazilian.

After some unusual sideboarding switches (Matias decided to be tricky and not pull out the combo) they started the second game with a comfy forty minutes still on the clock. The jitters seemed to have hit Matias a lot harder than Gunther who quietly sideboarded and shuffled while Gabrenja agonized for a full minute before handing his deck for shuffling.

They started of just like the first game with Seal Of Cleansing and Sapphire Medallion. Then Matias actually played a River Boa while Gabrenja stuck to the "Intuition for Accumulated Knowledge" path.

When the Boa tried to get Rancored up Matias had a Hibernation ready for it. Had he could not handle was the second Seal. He tried to Force it but Raphael had the Pyroblast. Again dropping several inches in his chair the Argentinean nervously bobbed as he played Draw-Go against the returned River Boa (with Rancor) and the Treetop Village.

That was not a good situation for Matias Gabrenja who had clearly been caught in his sideboarding plan. Knowing he would have a hard time simply staying alive for the next few turns Matias conceded.