Round 13: Jose Barbero vs. Rodrigo Nascimento 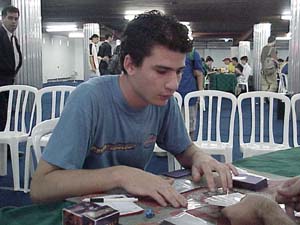 The final chance. Whoever wins this round is in the Top 8. After two long days and twelve rounds of Magic this is the all or nothing of the Grand Prix for these two players.

Barbero came out like Finkula should: second turn Mage - locking Exhume - and third turn Shadowmage Infiltrator. The two cards that give the deck its name showed Jose was ready to shake the jitters and win the round.

He liked being in control so much he Sworded Rodrigo's Nether Spirit and used a Duress to see Nascimento's land heavy hand. A second Finkel followed by a Phyrexian Negator got the Brazilian into a world of trouble.

But having a hand full of land isn't that bad when you have an Avatar Of Woe. The monster came out only on turn eight but still forced the Argentinean to rethink his battle plan. He played a second Mage - naming Animate Dead - and a Spectral Lynx before sending everyone in.

The Avatar traded with the Negator and another Duress revealed Rodrigo's land ridden hand. He drew a grand total eleven lands in a game that lasted less than ten turns. There was nothing he could do.

Barbero added in Verdicts and two extra Negators while Nascimento went for the Null Rod, Evincar and two Unmasks. Again the shuffling went on in silence. They both knew this was the real thing, the round to make or break. Whoever wins here makes it to the Top 8 while the loser has to settle for coming so close and failing in the end.

Nascimento had a Vampiric Tutor on his opening hand but decided not to go for it on the first turn. Instead he removed one Unmask to cast another prompting Barbero to remove Finkel to protect his hand with Force Of Will. His second turn Meddling Mage again locked out Exhume.

He added more to his army with a Spectral Lynx, but was still locked at two lands. Seeing this Nascimento went for it: he Vampiric for a Rishadan Port. With that he reached four mana hand and showed Crovax's ugly grin: Massacre!

Barbero dug with a Brainstorm but couldn't find another land and sensing the blood in the water Rodrigo started to press. He used a Buried Alive to get two Krovikan Horrors under Multani and then Reanimated the Multani. 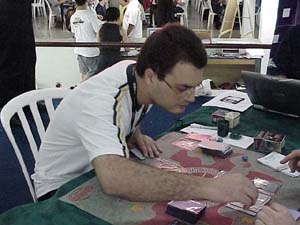 That might seem scary but Barbero wasn't about to roll over. He had a Diabolic Edict just waiting for it. The bottom Horror bounced back to Nascimento's hand and his Multani got a second life from an Exhume. A Mage showed up a turn later to lock further Exhumes out and another Diabolic Edict took out the Multani.

Since his big monsters couldn't seem to stick around the Brazilian switched to his back up plan: Zombie Infestation. He Entombed Squee to help power it along with the Horror but Barbero again was having none of that nonsense.

A Seal Of Cleansing took it out. With his hand now empty Nascimento could only hope he could draw business spells before Barbero found lands to explode. The Zombie was holding of the Mage but couldn't stop a Spectral Lynx.

The Argentinean had somehow managed to survive the tough early game and was now in control. With the eight damage from playing Reanimate on the Multani Nascimento was in deep trouble and couldn't find an answer in time.

He extended his hand and after shaking it Jose Barbero exploded along with his friends in a roar of joy that soon turned into a discussion with the Argentineans trying to talk him into playing the hotel bill with his Top 8 money.