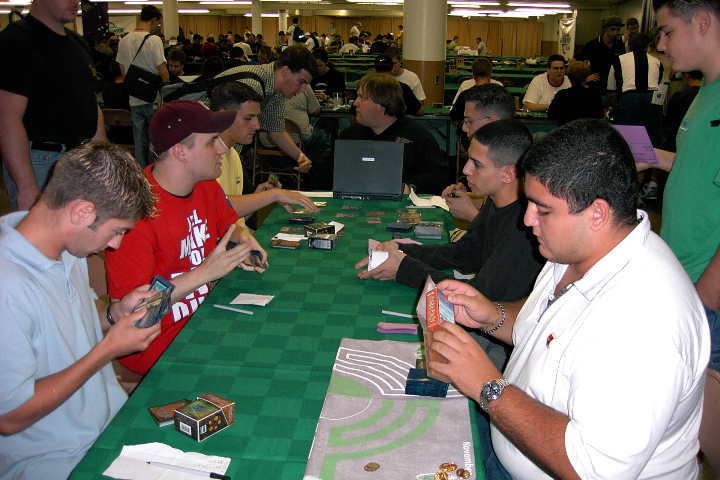 Team Sped has grown up on the Pro Tour and they've never stopped having fun. For GP Columbus, the Sped reunion tour lineup is Jaime Parke, Joe Weber, and Bryan Manolakos. Their second round opponents - Empty G's - were Alex Lieberman, Ben Stark, and Antonio de Rosa.

The G's lined their colors up as black/red, blue/white/black, and green/red/white. The splashes can vary, but this seems to be the default plan for most teams. In fact, the Speds had the same basic plan: blue/white (albeit with a red splash for Jilt and Minotaur Illusionist instead of a black splash), red/black, and Green-blue-black. Manolakos and Lieberman pitted their base-green decks against each other. Lieberman had Fires of Yavimaya so his build was fairly aggressive while Manolakos was running a very Apocalypse influence deck with AEther Mutation, Living Airship, Consume Strength, Llanowar Dead, two Ana Disciples, Savage Gorilla, and Glade Gnarr. He also had the team's Stalking Assassin. The other two matches were each black/red against blue/white control.

Lieberman did get his Fires on turn 3, but he didn't have enough creature to keep up the pressure and Manolakos was able to stabilize. Once they got into he mid-game, Manolakos's card quality combined with Lieberman's remarkable ability to draw land off the top of his deck resulted in a 1-0 lead for team Sped. 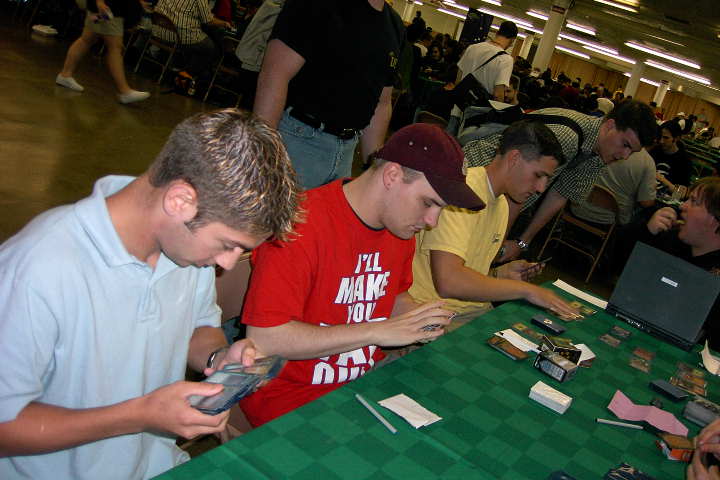 Parke was doing his best to chump block on the ground and fly over for damage versus de Rosa, but that's awfully hard to do when your opponent has Tsabo Tavoc and Keldon Necropolis in play. Parke top-decked Obsidian Acolyte on the crucial turn and pulled off his miracle. Things weren't all good for Sped though, as Stark's control deck also took game 1 from his black/red opponent (Weber).

Parke "plucked" again in game 2, drawing a Shackles off the top the turn he needed to deal with a Sinister Strengthed Halam Djinn. (It's a team sped report, I've got to use as much lingo as possible.) However, de Rosa plucked back, drawing a Keldon Necropolis that just barely outraced Parke's fliers and evened their match at 1 each. Manolakos drew a nice mix of land and spells again in game 2, staking team Sped to a 1-0 lead, but Stark won his own game 2 and evened the overall match at 1 each.

So it all came down to game 3 between Jaime Parke and Antonio de Rosa. De Rosa's had a solid black/red while Parke's red splash gave his blue/white deck the touch of removal he wanted. They shuffled up with 14 minutes left in the round and their teammates gathered around them to watch. De Rosa explained before the game that he had figured out that he should have won the first game. He conceded because of Parke's Obsidian Acolyte, but later realized that the Sinister Strengthed Shivan Zombie couldn't actually be blocked by that Acolyte! It was a bit more complicated than that because Parke also had a Dream Thrush, but de Rosa could have sacrificed Tsabo Tavoc to Necropolis to remove the Thrush. Parke just shrugged his shoulders and smiled. Then they got on with their pivotal game. 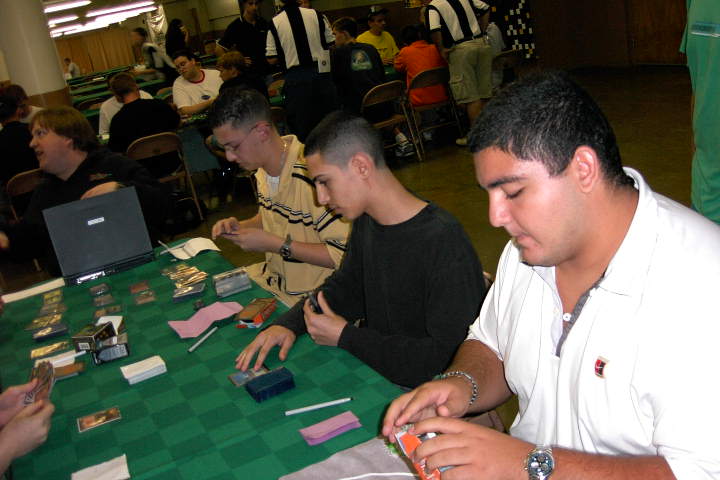 "You and your busty draws" was all de Rosa could say after Parke held off he early beats with Razorfoot Griffin, used Hunting Kavu on Lava Zombie, gained 6 life from Honorable Scout (and still got to trade it for Urborg Phantom), and then used Jilt on the Lava Zombie and a Shivan Zombie. Ouch. The good news, though, was that all Parke had left for the next few turns was Benalish Trapper, Sawtooth Loon, and Obsidian Acolyte.