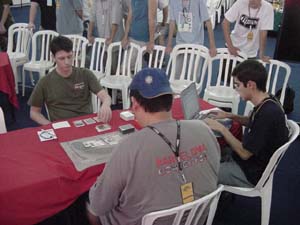 How the mighty have fallen. Carlos, known as "Jabaiano", won the last Brazilian Grand Prix but recent bad results at premier events made him slip out of the three-bye zone. He sat out for two rounds and is now facing Giacomo De Rocchi, who only had one bye, hoping to begin on this Feature Match table another surge for the trophy. Obviously Giacomo would like to please all his friends in the audience by defeating one of the best Latin American players.

Giacomo is playing a White Weenie with Blue and Black dual lands, probably resembling the various incarnations of the fabled Euro WWMage from Worlds while Carlos is playing a control deck similar to Operation Dumbo Drop or whatever we are calling Walamies' deck this week but with Red in it for Pyroblasts.

Giacomo opened up with a Mother of Runes, who quickly grabbed a Plowshares followed by a White Knight. After a long Brainstorm Jabaiano took a hit from the Knight and a Soul Warden (14/20) while building up mana for the Wrath in his hand.

On the next turn Carlos's Wrath wiped the table and after Force of Willing a Spectral Lynx out of the way he seemed in perfect control of the game at thirteen. Rocchi was surely out of speed and this gave Romao time to build up his hand.

A Warrior En-Kor went uncountered and Carlos took three hits from it down to nine before casting a Fact or Fiction resulting in the following piles. 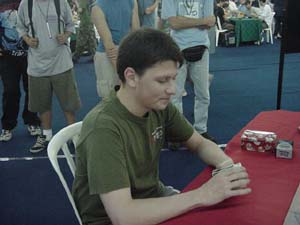 Jabaiano had to dig deep so he grabbed the Brainstorm. He found a Fact or Fiction and took (Morphling, and Tundra) over (Call Of The Herd, Savannah and Fact or Fiction). It was understandingly a very hard pile to split for Giacomo but he seemed very sure of his options.

The Morphling hit the table and the game shifted. Unable to get pass it Rocchi played a Soltari Priest to shadow in the last seven points. After so much deck manipulation Jabaiano had the Swords to stop that plan and with a sigh Giacomo was back to dropping land and passing the turn.

The Morphling decided to rule the Red Zone (in fact the whole Red table) while both players dropped useless Seal of Cleansings. There was nothing Giacomo De Rocchi could do: the Morphling had the time and resources to win the game and did so in a few easy turns.

Carlos sided in a Swords and a Pyroblast for a Seal of Cleansing and an Impulse while Giacomo took out a White Knight and two Seals of Cleansing for a Crusade, Armageddon and Spectral Lynx. Both took a long time to figure it out but Giacomo took a bit longer deciding the third card to cut.

The first deck got another wind by starting first but Rocchi was forced to agonize over a one-land hand. Could he topdeck another and explode of the blocks? In the end he decided he couldn't risk it and mulliganed (checking the top card to make sure he had made the right gut decision). Sadly the second and had no lands and again Giacomo grabbed his deck to mulligan.

His third hand came out ok and on his second turn he had a Soltari Priest followed by a third turn Spectral Lynx. Jabaiano had the opposite problem: he had a land light hand and was trying to minimize the damage until he could unleash his Wrath of God.

The Priest and Lynx brought Romao down to fourteen before he could cast Wrath. When he did Giacomo had a window to cast a spell since his opponent was tapped out - Jabaiano had a Force of Will but Giacomo didn't know - but his two mulligans had left him with little gas to press on.

He Sworded the first Elephant Token (from Call Of The Herd) and dropped a Soul Warden but Carlo was now in full steamroller mode. A Fact or Fiction revealed these piles: 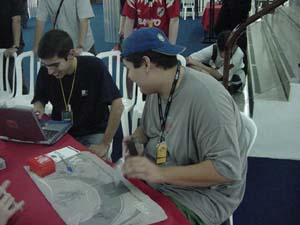 Pile One: Force Of Will, Call Of The Herd
Pile Two: Swords To Plowshares, Forbid and Adarkar Wastes

He took the first pile. Splitting this Fact or Fiction seemed to knock the last hopes from Giacomo's eyes. He knew he was in big trouble now. A second Soul Warden was too little to slow his huge opponent. To add injury to pain a second Fact or Fiction brought up more goodies for Carlos Romao but it hardly seemed to matter now.

A second Call token made sure the Wardens couldn't race despite the extra life points from every dropped creature. The Elephants continued their wild stampede while Rocchi dropped creature after creature to stem the bleeding. His two Warrior En-Kors teamed up with the Wardens to bring down some tokens but Jabaiano's hand was a Control player's wet dream and picked answers to everything.

The double mulligan decided the game, and the round. Giacomo fought as long as he could but there was no stopping Jabaiano. With the extra time he had no problems setting up his mana base and wiping out the opposition.