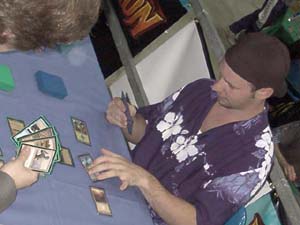 After a long and comical, discussion about who had what to play in what seats the two teams managed to sit down and start the round. These six players are without doubt among the best in the world and their title lists would make an article by itself. A team with two Pro Tour Champions against the winners of Tokyo's Masters.

Ryan - "I'm winning Worlds. I have to win Worlds, dammit!"

Fuller had to take a mulligan and opened with a Disciple of Kangee. After a lengthy Harrow Fuller played a Benalish Trapper. Again Shvartsman had no play and could only comment "my draw is so tight!". He was still without White mana and Fuller made a joke about Shvartsman top decking a Mountain while Benafel and Zvi finally got their game underway.

Alex tried to fight his mana screw with a Rushing River, with kicker, that bounced both of Fuller's creatures. Meanwhile Zvi played a Slingshot Goblin that could create trouble for Chris' Blue based deck.

Ryan replayed the Disciple and played a Nomadic Elf rebuilding his army. The Trapper came back into the play while Fuller flashed a hand of two Gerrard's Command and two Gaea's Might to his teammates, and a few spectators. Shvartsman finally woke up Harrowing for the last two land types and dropped a Samite Pilgrim. Obviously that was not enough to stop the incoming horde after a Gaea's Might. Alex was forced to scoop.

While Alex and Ryan shuffled, Chris and Noah traded jokes and comments about their respective games. A Darigaaz's Charm from Zvi seemed to have finally broke through Benafel defenses removing his lone Metathran Zombie.

While shuffling Fuller dropped a card and Alex couldn't avoid saying: "Cadaverous Bloom?", getting a few laughs from the players. This time Alex came out to play with a Thornscape Familiar and Fuller upped the ante with a Quirion Dryad that promised to get very big versus a Green-White splash Blue deck.

After long deliberation Fuller played a Disciple of Kangee to pump his Dryad. Alex found one of the few answers to the threat when he locked the Quirion Dryad under an Hobble while Chris Benafel struggled to correctly state how he intended to resolve a Marsh Crocodile with an empty hand.

Over at the end of the table Mikey silently won the first game of the Blue-Black versus Black-Red match up. Meanwhile Ryan Fuller was in deep trouble: he lost his Dryad and Disciple blocking. In fact his only non-land permanent was a Lashknife Barrier. Alex Shvartsman was exactly the opposite: a force to be reckon with. He had a Samite Pilgrim, Thornscape Familiar, Rampart Elephant and a Razorfoot Griffin.

Fuller had to play an Order Migration to stop the bleeding. The Elephant called one of the tokens to allow the Griffin to attack without having to face three tokens protected by the Barrier. Alex then dropped the elbow: Questing Phelddagrif.

In the middle table, Benafel lost a game he expected to win, and had claimed so. 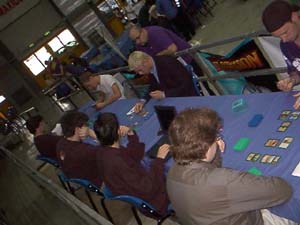 Benafel: "I drew three lands of the top like the champ I am."
Benafel: "Noah, how are you doing?"
Mike: "He's gating his whole deck!"

It was Ryan Fuller's turn to lapse into deep thought while Alex got a chance to crack a few jokes. On his next turn the American sent his whole team in. Fuller tried to stop the Griffin with a token untapped by Gerrard's Command. Alex forced the token to block the Elephant and Fuller used a kicked Rushing River to get rid of the Griffin and Phelddagrif, at least temporarily.

The White half of a Wax/Wane took the Barrier down in an attempt to kill a Nomadic Elf that was blocking the Elephant. Fuller was, however, not unfazed by that and saved the Elf with a Fleetfoot Panther. On the next American swing the Elephant called the Panther tricking Fuller to double blocking with the Nomadic Elf. A Gerrard's Command on the unblocked Thornscape Familiar sealed the end of the game.

With Benafel taking a mulligan and Noah frowning at the huge array of creatures on Pustilnik's side it seemed that Fuller was in for an uphill battle. He came out flying with a Llanowar Knight and unkicked Benalish Lancer. The Lancer got blocked by another Lancer but Fuller used a Fleetfoot Panther to save his monster.

The Dutch-Canadian then played a Disciple of Kangee but Alex found a efficient blocker: Razorfoot Griffin. The Griffin received a Gerrard's Command and stopped the Panther. He then played a kicked Benalish Lancer stopping Fuller ground pounders while Noah Boeken conceded his second game after a topdecked Hunting Drake put him into a world of unsolvable troubles.

With the table now under control Alex played a Questing Phelddagrif giving Ryan Fuller, who still hadn't drawn a Blue mana source, a new problem. With both players with a kicked Benalish Lancer the ground seemed locked despite Fuller's Lashknife Barrier. Since Alex was also without Blue mana as well the Phelddagrif was grounded. He quickly solved that problem with a Harrow to get his Island and a Swamp.

The Phelddagrif gained flying ironically giving Ryan the card that could have save him: Rout. Too little too late for the tapped out Dutch-Canadian since the flying Phelddagrif could pump up to enough to kill him with a little help from the Razorfoot Griffin.

With Noah having lost a very complicated match up against Michael Pustilnik and Ryan Fuller fresh out of a tough loss to Alex Shvartsman, Chris Benafel was in a strange situations. After a talk to the judges about allegations of stalling he had a tough time concentrating on his match against Zvi, further hampered by comments from all the players around.

The game eventually came but not without a controversial situation when Ryan pretended to look at the top cards of Zvi's deck prompting the American to ask the judge if he wouldn't do anything. While some took it simply as a joke and thought that Fuller hadn't even look at the cards there were some players that thought the judge should have taken action despite the round being already decided.