Round 3: Potato Nation vs. Team Flees 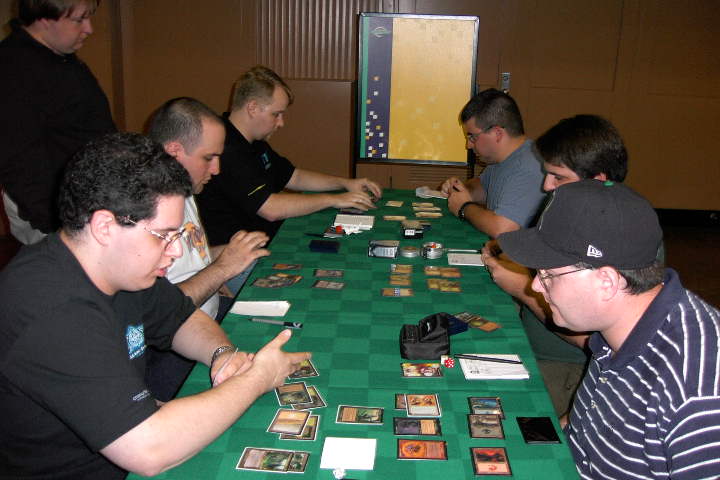 David Harris, Matt Leclaire, D.J. Flees are three guys from Dayton, Ohio who drove an hour to the local Grand Prix and proceeded to win their first two rounds. In round 3 they got paired up against reigning Pro Tour champion Potato Nation. Mike Turian, Gary Wise, and Scott Johns love this format and Mike and his Pittsburgh buddies have been trying to break it again this year.

Johns ran a 2-color black-red deck against Flees' blue-white-black control. Black-red seems to be an almost obligatory design in this format, though Team Flees did depart from it by adding a blue splash to theirs, which Harris took into battle against Turian's 5-color green. Interestingly, Turian has Dromar in his deck even though Wise is running blue/black/white! 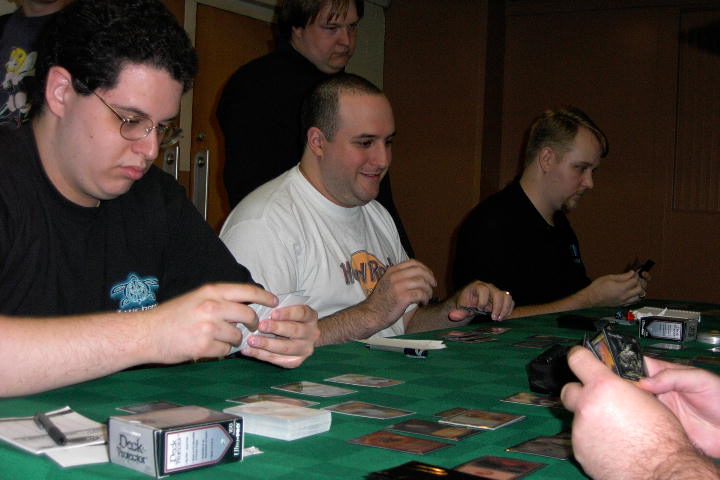 Leclaire, running Team Flees's green deck, managed to kick his Emblazoned Golem all five ways in game 1 against Gary Wise, but Wise had the answer in the form of Stormscape Battlemage and the mighty Potatoes were up a game. Flees used Rout and Lashknife Barrier early in game 1against Johns, but Johns had been slow playing his creatures and managed to recover. While that match played on, Turian was doing crazy things to Harris. Turian milked Benalish Heralds for a few turns, but Harris eventually found a Reckless Spite. That good feeling didn't last long as Turian immediately played a doubly kicked Sunscape Battlemage, destroying Harris' lone flier and drawing two cards. Harris fought back gamely while his teammate - Flees - continued to pound away on Johns. Flees' blue/white deck included lots of hate for Scott Johns' black/red. After Johns recovered from Rout, Flees came at him with Acolytes and Hunting Drakes and Galina's Knights and eventually claimed game 1 on behalf of Team Flees.

Leclaire had both Rith and Armadillo Cloak in game 2 against Wise, but Wise had the answers once again - a pair of Stormscape Apprentices. Leclaire just didn't have the removal to get through with either his dragon or his cloaked Trailblazer. Wise soon won the match 2-0. 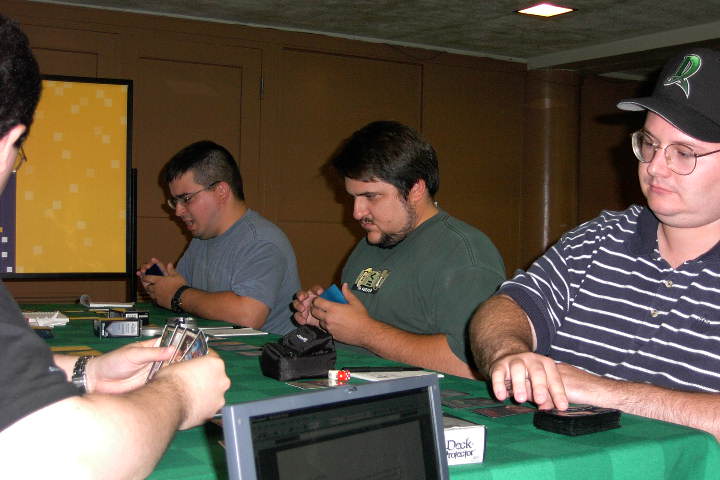 It took surprisingly long for Turian to win game 1 because Harris kept drawing removal spells - Demise your guy, Strafe your guy. Harris ran out of answers right before Turian played his Dromar, though. Dromar finally finished Harris off. Flees couldn't draw any Islands in game 2 against Johns and that match was quickly on to game 3. The Potatoes needed just one more game win to move to 3-0 and they had 3 games to try to for it.

It was Johns' turn to get mana-screwed as he failed to find a swamp and lost his match 2-1. That left everything up to Turian and Harris, with Turian sitting on a 1-0 lead. Sometimes Magic just isn't exciting, as each of Harris' first six lands was a mountain. He did have a lot of red spells, but none of them could deal with Jungle Barrier, much less Benalish Heralds. When Harris finally did draw black, Turian had 12 mana in play including the ability to make at least 3 of each color. Everyone laughed as Harris played Sulpher Vent and announced "he has Benalish Emissary, I just know it." Turian flashed it at him and everyone laughed again. The only reason the game was still going was that Turian's offense consisted of a lone Amphibious Kavu. Harris did draw a swamp, but it just didn't matter anymore.