Alan Epley started strong with a Stormscape Apprentice and Galina's Knight, and then stepped up the pressure by putting Armadillo Cloak on the Knight, one of the classic "good starts" in Invasion Block Limited.

A Samite Pilgrim added to his board control, but Reiji was able to get out a Stone Kavu to at least appear to be in the game. Unfortunately, Alan had a Benalish Trapper. With two tappers and a Spirit Linked, Trampling creature that just happened to have Protection from the color that Reiji had the most of, things looked grim for the local team.

When the Knight attacked, Reiji responded with a Harrow and a Rith's Charm, giving him more options. Alan tapped the Voice of All with the Trapper before blockers were declared, but Reiji had a surprise, playing Gerrard's Command to untap it right away.

Alan wasn't out of tricks either, killing a couple of tokens and using Malice (of "Spite and Malice" fame) to return the Cloak to his hand, deeming it more important than the valiant knight that gave her all for the cause.

The Cloak soon returned to warm up a Silver Drake, but not before the Stone Kavu had erased all the life that the Cloak had earned Alan in the game. Reiji kept his string of big ground creatures alive, playing a Kavu Chameleon and, even though it wasn't a particularly big creature, a potentially very useful Benalish Trapper of his own.

It wasn't useful enough, however, as Alan had Tapper Advantage, and Reiji was never able to overcome the lifegain from the Armadillo Cloak. Reiji soon scooped, giving the game to Alan. 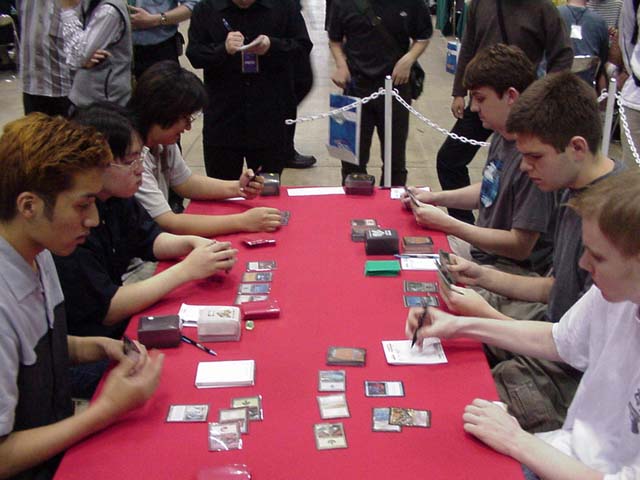 Reiji got the good start this time, with a second-turn Benalish Trapper. Alan's Galina's Knight and Dream Thrush were able to poke through a little damage, but it wasn't until Alan's Sulam Djinn showed up with the threat of being a flyer (thanks to a Disciple of Kangee) that it looked bad for Reiji.

Reiji had to Tangle to deal an Alpha Strike, and then was unable to take maximal use of the delay in Alan's untapping. Then Alan played a Teferi's Moat (set to Green), which effectively neutralized most of Reiji's attack.

After dealing with the Moat (in the middle of Alan's attack, which shrunk the Djinn from 6/6 down to 4/4), Reiji played a Voice of All (Blue) to match Alan's newly-played Voice of All (Green).

With ten minutes to go in the match, it looked like a stalemate in the making. Both players had tappers, big creatures, and Voices of All. Reiji was able to use Magma Burst to reduce the opposing army, and wads later able to use Gerrard's Command on his Voice of Law to get rid of the Galina's Knight.

In extra time, Reiji was able to pull the game out, drawing the match.