Round 4: The Ancient Kavus vs. Dynasty 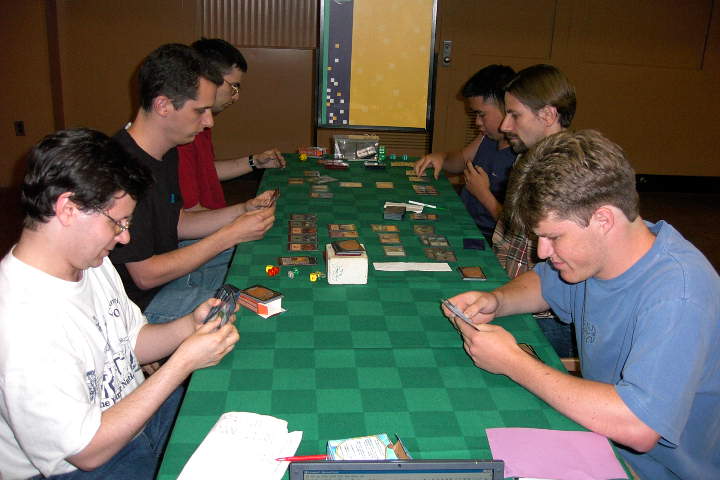 The Ancient Kavus vs. Dynasty

There were 11 PT Top 8's amongst the players at the feature match area in round 4 when the Ancient Kavus (Gary Krakower, Matt Vienneau, Mike Pustilnik) took on Dynasty (Gab Tsang, Brian Hacker, Ben Rubin). Vienneau and Krakower, both from Toronto, Canada, have bee playing together for years and last teamed up with Dave Price. That team finished 5th at Grand Prix Pittsburgh last summer, but broke up when the Deadguys got back together. Vienneau and Krakower are teaming with Mike Pustilnik this season.

When Billy Jensen decided to team up with Matt Linde and Brock Parker this season, that left Ben Rubin team-less. Rubin has two Masters Series wins this season and as a member of Huey, Ben, and Casey he also won a GP and placed highly at the Pro Tour. He decided to team up with old school heroes Brian Hacker and Gab Tsang. The only problem is that the three of them are 10 PT points short of the necessary 50 going into Worlds (and Hacker isn't even Qed). They're really hoping to do well this weekend or Rubin will be sent back to the drawing board while Hacker and Tsang are left out in the cold.

Dynasty believes in mana consistency much more than card quality. They're running a pair of two color decks (Tsang's black-red and Hacker's black-blue) and only Rubin has a third color - he's green-white touch white, with the possibility of Armadillo Cloaked Glimmering Angels, just like when he won the Chicago Masters. In the last set of decks, Dynasty also ran a pair of 2-color decks plus one that splashed in a third color. None of this 5-color green nonsense for them - with their last set of decks none of them ran green! The Kavus have the obligatory black-red deck (piloted by Grand Prix superstar Vienneau - he of the two Invasion block limited GP wins) along with two different green builds. Pustilnik has a splash of green in his blue-white deck while Krakower has many colors in his own (mostly green-white) deck. 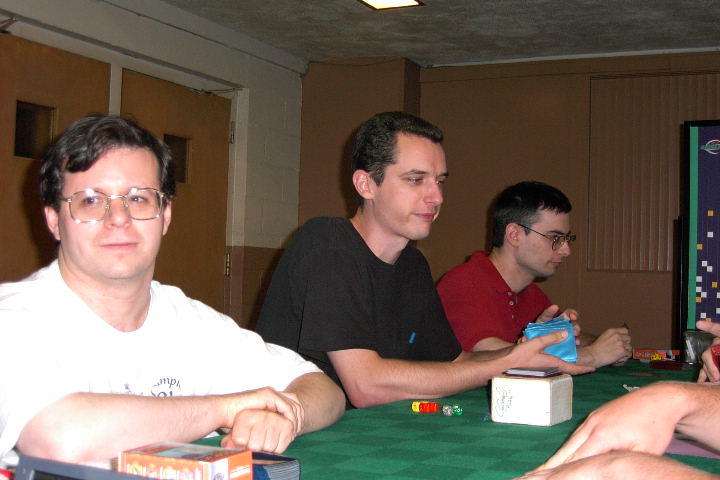 Tsang's removal tore a path through Krakower's green creatures in game 1 and when Pustilnik failed to ever draw an island or cast a spell, Dynasty leapt out to a pair of 1-0 leads. The tide turned quickly when Tsang failed to draw a mountain and conceded game 2 with 6 red removal spells in his hand. Rubin failed to draw anything but forests and had to start discarding, but did draw out of it. Wash Out and Rushing River bought him lots of time, but time advantage isn't worth much if you aren't attacking with anything. Pustilnik kept replaying his Silver Drake, Living Airship, and Tower Drake. Soon that match was also even at 1-1.

Krakower's multi-colored manabase did him in in game 3. He kept a hand with Urborg Elf and Llanowar Knight but no green mana. When he finally drew green (on turn 4), it came into play tapped. Tsang threw creatures onto the table quickly and once Krakower was able to start playing creatures, Tsang could just burn them all and keep attacking. Match 1 to Dynasty.

Vienneau was playing slow 3-color decks full of expensive but powerful spells even before Apocalypse came out, so he seemed right at home with his black-red-just a touch of blue build. He took game 1 largely on the strength of Crypt Angel. Hacker - always one to did deep into his sideboard for janky technology - did manage to counter a Plague Spores with Jaded Response, but Vienneau swept him anyway. 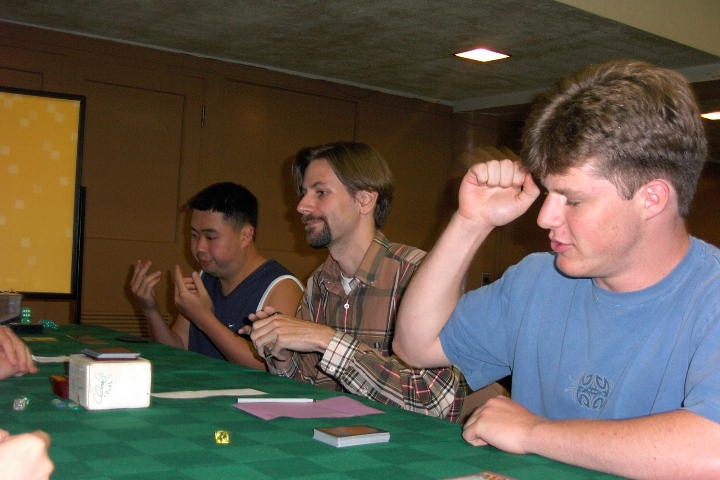 It all came down to Rubin and Pustilnik, who found themselves in an enormous stalemate in their third game. Pustilnik had several nice fliers, but none of them could survive combat with a pair of Pincer Spiders. Pustilnik did have Metathran Transport, which could turn the spiders blue and poke through for a point of damage, but that was about the only thing going on. Pustilnik's Coalition Honor Guard was making Rubin's life miserable as he tried to figure out how to use his Samite Pilgrim, Gaea's Might, and Armored Guardian. Wash Out and Rushing River gave him a little bit of play, but not enough, especially when Pustilnik turned half his team blue as a response to Wash Out. Pustilnik had so much more mana in play than Rubin that he was able to replay his creatures much faster. Pustilnik also used his Trapper and a pair of Temporal Springs to great effect, neutralizing Rubin's Pincer Spiders so he could get through for more damage. The second Spring was a real backbreaker and Rubin could do little but raise his eyebrows and rock back in his chair. Pustilnik just seemed to have a better green-white-blue deck for the mirror match.