Round 4: Antoine Ruel vs. Ryan Fuller 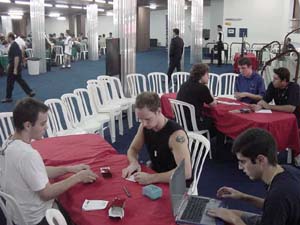 The Round 4 Feature Matches: Antoine Ruel vs. Ryan Fuller and Alex Shvartsman vs. Olivier Ruel

This has got to be the easiest round for picking feature matches ever: the two Ruel brothers match up against Ryan Fuller and Alex Shvartsman. The four Pro Tour players call it "the fix" to keep them from winning it all and even went to the trouble of calculating the astronomical odds of the situation. Ruel is packing a Dumbo-like deck while Ryan is playing the deck most consider the absolute king of the format: Red Donate.

A Call Of The Herd gave Ruel some pressure but Fuller had a trick up his sleeve as well (Intuitioning for Accumulated Knowledge to draw three extra cards). The game was surprisingly slow and calm to this point with some jokes about the match and insinuations that the reporter was bored so he decided to rig the pairings to get some exciting Feature Matches. Lies, all lies I tell you!

A second Medallion was quickly matched by a second Elephant token but the game was now an extremely calculated affair with both players weighting in all possibilities. Setting up for a possible counter war Ryan fetched a Force Of Will.

With that backup he dropped an Illusions and kindly gave it to the Frenchman. Ruel tried to Sword a token on his upkeep to let go of the nasty enchantment and they launched into a counter war that left Ruel with a single card in his hand staring at Ryan's three Force Of Wills on the stack!

It wasn't and they reached for the sideboards with Fuller saying he had a huge advantage after sideboarding and Antoine telling his brother how absurdly lucky the Canadian had been. 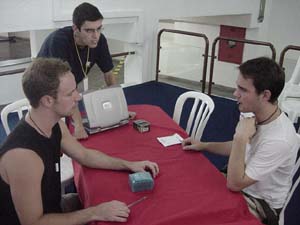 Antoine Ruel sided in Powder Kegs and Pyroblasts while the Canadian took out his combo for the after great consideration about a Hibernation. Ruel was forced to mulligan and he kept a threat-light second hand. The first play of the game belonged to Antoine who tried to cast a fourth turn Fact Or Fiction that Fuller promptly Forced away (tossing a Hibernation). A turn later history repeated itself with another Forced Fact or Fiction.

When the French used a Brainstorm followed by a Call Of The Herd Ryan saw his opening and launched a Ruination that forced Antoine to empty his hand to protect it (having to use a Force of Will and a Hydroblast to match the Ruination and a Pyroblast). Despite being empty handed Antoine still had his Elephant swinging while Ryan dug deeper into his deck.

Things got a lot trickier for him when Ruel felt confident to find the second Elephant and increase the pressure. The Canadian could only shake his hand as he drew card after card without finding an answer.

After a few sideboard touches and Olivier's story of his round (losing to Shvartsman's Finkula without sideboard) Antoine once again had to take a mulligan while Fuller explained that he shouldn't have removed a Hibernation for his first Force of Will in the second game.

This time the Canadian had an early play in the shape of two Sapphire Medallions while the French went through his usual mana tricks with two Tithes and a Brainstorm. Ryan took the chance to Intuition for Accumulated Knowledge.

Ryan: "I thought about letting you go first to screw up all your Tithes."
Antoine: "Yes, yes, sure."

The French answered with a smile and an Elephant to set up a clock. It seemed meaningless against Fuller's full hand and a third Medallion but an Impulse revealed an interesting twist: Antoine found himself a Powder Keg. Fuller tried to counter it but again with a smile Antoine had the Counterspell to stop it. 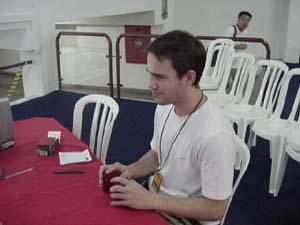 Still the lone Elephant attacked while his pal the Keg blew up Ryan's Medallions. Ruel Gaea's Blessed three card drawing spells in to improve his hand and launched himself into Impulse mode. Meanwhile Fuller was still taking the notion of Draw-Go a little to seriously drawing land after land and cycling his Fire/Ices. The Elephant brought him all the way down to five before things changed.

Fuller noisily drew a Merchant Scroll and used it to fetch the fourth Accumulated Knowledge. He tried to use it when Ruel cast his Fact Or Fiction and again they stepped into a counterwar, albeit much shorter than the one at the end of the first game. Still the four cards out of the Accumulated Knowledge didn't help Ryan stop the Fact in the following counter war. Piles were as follows:

The Frenchman took the second pile and all tapped out Ryan watched the Elephant bring him down to two and Ruel drop a Morphling. His only hope now was the Ruination in his hand. When Ruel protected his Morphling to use the mana from a land tapped by Fire/Ice Fuller conceded revealing his hand. Even if could resolve the Ruination he couldn't stop both creatures on the following turn.