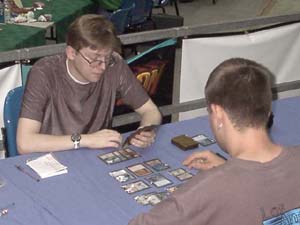 Team Vintara is an Italian team who has had a great day so far today and is hoping to carry that performance well into the second day. They are now facing a team that includes a former World Champion, Jakub Slemr. We followed mainly the game between Tomas Kosicka and Gianluca Bevere.

Gianluca came out like a bat out of hell with a Thornscape Familiar followed by a Charging Troll while Tomas played land after land. After long deliberation Kosicka played a Ancient Kavu while Bevere used a Harrow to broaden his mana base.

Meanwhile on the Table A Beduzzi used a Agonizing Demise, sadly without kicker, to take out a Shivan Wurm as it came into play forcing Jaroslav to bounce a creature. In table C Slemr and Angeli settled in for the Blue-White-Black mirror match that normally lasts the whole round.

Back in the center Gianluca played a 4/6 Wayfaring Giant while Tomas used a Crosis's Charm to blow up the Charging Troll. A Tribal Flames turned the Ancient Kavu into old news to make way for the Familiar-Giant duo.

As if that wasn't enough the Italian then played a Power Armor (with three different land types) drawing a sad smile from the Austrian. On Table C Slemr seemed to have found a way to turn multiple creatures sideways while in Table A Beduzzi seemed unhappy about the flow of the game.

Meanwhile Tomas played an unkicked Duskwalker and a Mire Kavu (a 4/3 since he had at least a Swamp). The Mire Kavu blocked the Familiar while the Duskwalker took a suicide jump in front of the Wayfaring Giant. The Armor and an Agressive Urge turned the Familiar into a 6/5 saving him front the Mire Kavu.

Suddenly the answer leaped out of Kosicka's deck: a Plague Spores that took down the Giant and a Forest. Alessio Angeli lost the first game to Jakub Slemr while Gianluca considered his next move. Tomas played a Mourning and a Phyrexian Slayer to slow down the incoming Familiar while at four life. Still the Familiar leaped into the virtual Red Zone (all blue in this case) and a Power Armor pump brought Kosicka down to a single life point.

He played an Andradite Leech creating a possible 7/7 blocking duo that promised to stop any incoming monster. However Gianluca had THE answer: Rampart Elephant! He also played a Quirion Elves to gain creature advantage. All that Tomas could draw was another creature, a Caldera Kavu. The unresistable call of the Elephant finished the game on the following turn.

While they considered their sideboards Jakub and Alessio were quickly trading flying blows, with the Czech having a clear advantage, in their second game while David and Jaroslav played "who has the biggest beast" in the other table in a very locked up first game although David's freshly cast Volcano Imp, the only flyer, promised a swift end.

Kosicka risked a second turn Nighscape Familiar but Gianluca was ready for it with a Tribal Flames. The next creature was a unkicked Nightscape Battlemage that promised a world of trouble later on. Bevere's next creature, Quirion Explorer, was taken down by a Cursed Flesh and he lost a Plains to a Ravenous Rats.

He finally stopped back paddling when he played a Quirion Trailblazer to thin his deck. Then all hell broke loose, a.k.a. a Cavern Harpy arrived. The Rats made another trip and with six mana on the table the Battlemage seemed eager to bounce back into Tomas's hand.

In a flash both table A and Table C ended their games. David finally won the long battle while Jakub's flyers took Alessio down in the second game. After some brief chatter Gianluca and Tomas settled back into their game with Bevere playing a Charging Troll. Kosicka took the turn to improve his tricky abilities with a Nighscape Apprentice. With the table quickly heading into a lock Gianluca tried to increase the pressure by Cloaking his Troll with an Armadillo.

He probably knew he was going to lose the Cloak when the Nightscape Battlemage bounced back with the Harpy but he needed to cut down on Tomas' life points to stop the Harpy trouble. Still, despite the Cloaked problem, Tomas Kosicka took his sweet time to consider his possibilities. Strangely he attacked with the Battlemage! When Gianluca used the Troll to block he finally blew it up with a Crosis' Charm!

The Quirion Trailblazer attacked and got blocked by the Harpy that bounced back into Tomas' hand. Meanwhile Jaroslav was in deep trouble as he was limited to a Kavu Agressor trading blow with a Mire Kavu and Lava Zombie. He quickly turned that around with a kicked Magma Burst but this forced him to go down to two lands.

With Tomas locking up the table Gianluca still found a troublemaker in a Radiant Kavu. The Kavu would hold the ground for a while if Gianluca wanted to but he decided to attack into the bouncing Harpy to ping Kosicka while he could. He then played a Thornscape Battlemage, which imediately went into Mourning, and a Kavu Climber. His army was growing and Tomas seemed to be stumbling with a deck that he wasn't used to controlling. Another Ravenous Rats forced the Italian to lose a Hunting Kavu.

In Table A, under the close scrutiny of the two teammates Jaroslav was in trouble when Beduzzi played a Pyre Zombie to break through a creature stall further helped by Sita's horrible block (a Horned Kavu that blocked a Phyrexian Reaper). That game was over in a few turns.

As he looked back Gianluca had just played a Power Armor but the returned Nighscape Battlemage bounced all his creatures away. Tomas added a Caldera Kavu and a Phyrexian Slayer to his army while Bevere tried to fight back the tide with a Amphibious and Horned Kavu.

If Tomas was hoping to fly in for the win Gianluca gave him something to deal with: a kicked Pincer Spider. With the clock grinding down into the end of the round Bevere was in deep trouble: trying to find a way past the wall of tricky blockers to deal those elusive two last points of damage hoping his teammate, David Beduzzi, could win his third game.

His line of defense, the Pincer Spider, was taken down by a Plague Spores that also cut down his white mana and the Harpy-Slayer duo put him one turn away from defeat. He attacke with everything but Tomas Kosicka blocked everything as time expired.

With five turns remaining and high life totals the third game between Beduzzi and Sita seemed to be heading for a draw. A Magma Burst took out David's two blockers to allow Sulam Djinn and a Stone Kavu to swing once but the defensive wall was rebuilt with a Mire Kavu and a Nightscape Familiar and Jaroslav could not punch a hole in that.