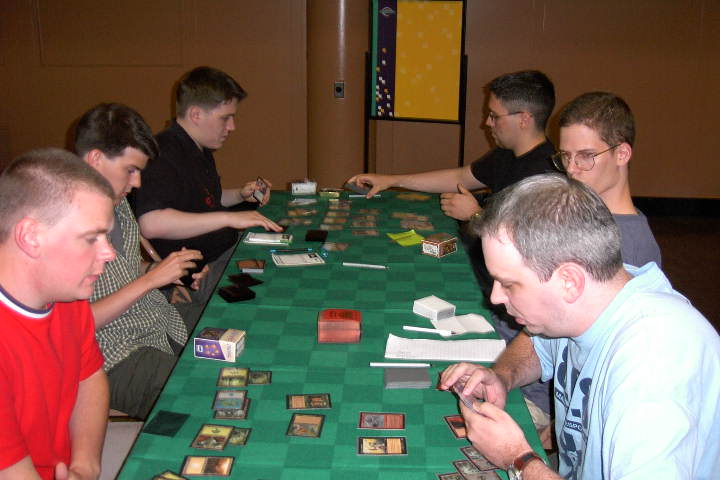 Now this is a feature match. The Car Acrobatic Team (Aaron Forsythe, Andrew Cuneo, and Andrew Johnson) finished 2nd at Pro Tour New York and 3rd at the Tokyo Masters. This is their format. The European Alliance (Sigurd Eskeland, Patrick Mello, and Kai Budde) is a great collection of individual talent, with 4 Pro Tour wins between them, but they've never played together as a team before. Each team was 3-1 as they sat down and the odds of making day two at 4-2 are not good. It will be a long weekend for whoever loses this match.

Once the European Alliance had settle on the basic designs for their three decks, they immediately started talking about the metagame. That may sound a bit weird for a Limited event, but here's how it works. During the draft, seat A is in the best position to draft the most Planeshift cards and so that player often goes black-red. Similarly, the middle seat is often a control deck and the left-hand seat is often a 3, 4, or 5-color green deck (since it's the seat that wants to be able to counterdraft the opponent the most). The Euros theorized that anyone who practices at all would develop specialists at playing each of those three decks and those specialists would play those decks during the team sealed portion of the event.

So the Euros played the metagame. They put their blue-black touch red deck into the middle seat (Mello's seat) because it looked amazing against control (two Sleepers Robes, lots of Banishings and card advantage). They put their blue-white deck into Kai Budde's hands because he expected to face opposing green mages. And they gave Sigurd Eskeland the 5-color green beatdown deck full of protection-from-black Llanowar Knights and other cards they expected to be good against black-red. 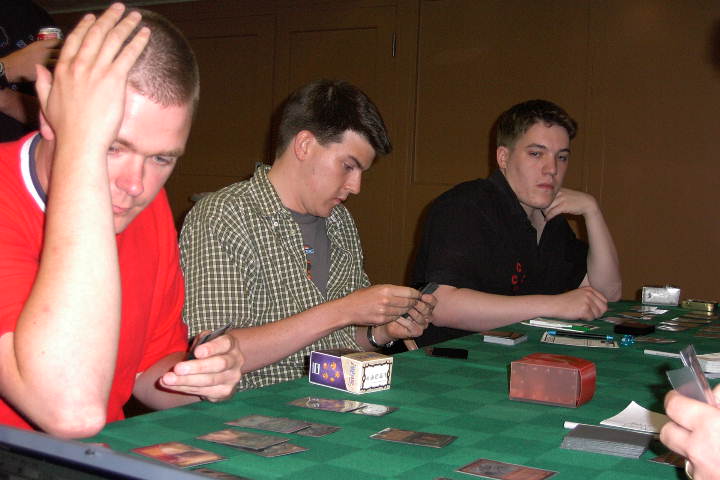 CAT played right into their hands - handing each team member the archetype they liked to draft - and the Euros got precisely the three matchups they wanted. Eskeland did lose game 1 because he drew too many mana cards and not enough business spells (that will happen when you play 16 land, two Fertile Grounds, and multiple Elves), but the other two game 1's went according to schedule. Johnson's 5-color green didn't come out fast enough to scare Budde and Mello destroyed Cuneo.

Budde drew his only mountain as one of his only two lands in game 2 and died before he could cast a spell and that match was even at 1. Eskeland drew a nice mix of land and spells while Forsythe stumbled out of the blocks (he kept a 1 land hand, drawing, and drew and 2 on turn 3) and that match was also even at 1. Meanwhile Cuneo was giving Mello all kinds of problems with his Obsidian Acolyte. Mello's hand of Recoil, Recoil, Urborg Emissary was worthless so he went for Dralnu's Pet with the kicker. That wasn't enough either and suddenly all three matches were 1-1.

In game 3 between Budde and Johnson, it wasn't at all obvious that Budde's blue-white deck was the one they wanted to send into battle against green. Johnson's 5-color green decks are always full of expensive bombs, not bears. His mana base exploded and then he showed off Tek and Death Mutation. Rushing River cleared a path and then Johnson came in for like a million damage. Budde did have a trick up his sleeve though - Captain's Maneuver redirected enough damage to also kill Johnson! They consulted with head judge Nat Fairbanks who confirmed that the Maneuver is a replacement effect and so the remaining combat plus the Maneuver damage resolved simultaneously and the match was a draw. 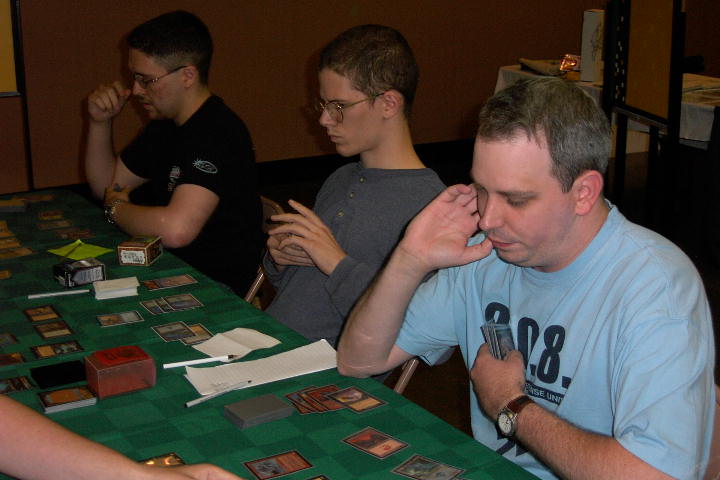 Eskeland did obscene things with Ceta Sanctuary and Kavu Chameleon in his game 3 against Forsythe, turning his Chameleon red after the Sanctuary loaded onto the stack but before it resolved so he could draw an extra card each turn. Forsythe couldn't deal with the card advantage and soon Cuneo was playing for the 1-1-1 draw while Mello was playing for the 2-0-1 win.

Cuneo used Hunting Drake to deal with Mello's first Sleeper's Robe, but he second one hung around for a while on a Cinder Shade. Cuneo went into race mode with his fliers and it was quite a race - Tower Drake, Hunting Drake, and two Ordered Migrations put Mello under serious pressure, but with his Trapper Terminated, there was no way for Cuneo to stop that Sleeper's Robed Cinder Shade from taking one last chunk out of his life.