Round 5: DERAPIN vs. Team PPB 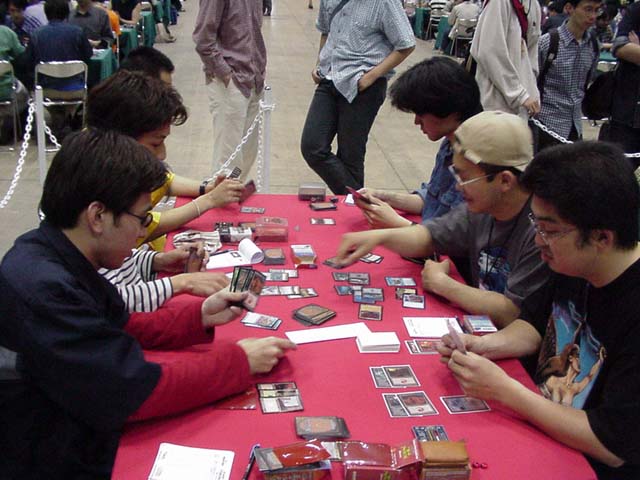 Satoshi started things off with a Pincer Spider, which was matched by Tomoyuki's Mire Kavu. A Satoshi Slingshot Goblin that tried to join the party fell victim to an Exotic Curse, but a Kavu Aggressor and a Horned Kavu showed up to mourn his passing and hopefully avenge his death.

Tomoyuki showed that the Exotic Curse had not been a one-time event, but rather the precursor to a Plague, whose Spores got rid of the RG Kavu. Tomoyuki had still not played a second creature, but he finally showed a Viashino Grappler, accidentally laying a Scorching Lava at first.

Having only played two creatures the entire game, Tomoyuki conceded.

The early creatures in Game 2 weren't anything to get excited about as Tomoyuki got out a Phyrexian Battleflies and felt threatened enough by a Satoshi Quirion Elves that he Zapped it into oblivion. A Nomadic Elf soon showed up to take its place, but by that time, the Battleflies had gated into a Lava Zombie.

Not to be outdone, the Nomadic Elf gated into a Horned Kavu. The Kavus traded, and Tomoyuki returned to his trusty Battleflies while Satoshi played his Nomadic Elf. At this point, despite all the action, Satoshi had only three land (two forests and a Tinder Farm), while Tomoyuki had five (three Swamps, a Mountain, and an Urborg Volcano. Getting rid of the Tinder Farm, he played a Thornscape Battlemage, killing Tomoyuki's Caldera Kavu. Tomoyuki didn't take that in the spirit of fun and promptly set the Tribal Flames on Satoshi's good old Nomadic Elf, following that up with a Plague Spores, killing the Battlemage and dramatically reducing Satoshi's land total.

Satoshi started drawing land, but between wantonly sacrificing it and getting it destroyed, he was hard-pressed to mount an offense before the Battleflies killed him.

The moral of this game is that when you have no land and no creatures, it's hard to win in Sealed Deck.

It was again hard to keep creatures alive, as Tomoyuki's unkicked Pouncing Kavu walked directly into a Rith's Charm Token. Tomoyuki was able to keep a Lava Zombie alive, but it had to fend off an army of tokens, Kavu, and Elves. Admittedly, everything in the "army" was a 1/1, but it still looked impressive.

It looked even more impressive when a Kavu Chameleon and a Thunderscape Battlemage signed up. It was a shame that they got Scorching Lavaed and Terminated on the next turn.

When his Thunderscape Familiar fell to Plague Spores, Satoshi was visibly relieved to play a Serpentine Kavu to face Tomoyuki's "army", which had turned into a Mire Kavu somewhere along the way. The Serpentine Kavu got an Exotic Curse, reducing it to a 2/2, which made it the equal of Tomoyuki's freshly-minted Slingshot Goblin.

Tomoyuki had even more creature removal stored up, however, and Burst some Magma all over his helpless opponent.