Round 5: Matias Gabrenja vs. Guilherme Fonseca 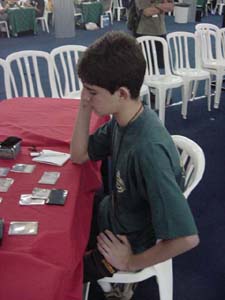 Gabrenja opened up with a second turn Sapphire Medallion leaving no doubt about which deck he was playing and Guilherme left no doubt as well when he followed a Treetop Village with two Granger Guildmage.

The Argentinean used two Merchants Scrolls to fetch a Force of Will and X and ignored a Call Of The Herd, he wanted to protect his combo and the Brazilian's army was not pressuring him enough. Sure enough he soon dropped an Illusions and Donated it to Fonseca who could do little else than scoop up his cards.

The Illusions almost got shuffled in Fonseca's deck which led to the following laughing exchange before they went into lightning speed sideboarding.

They sideboarded so fast in fact I could only see Guilherme side in Pyroblasts, Boils and a Phyrexian Furnace by the time I looked up. Further sneaking allowed me to see Matias' Earthquakes and Hibernations in the deck as he shuffled. 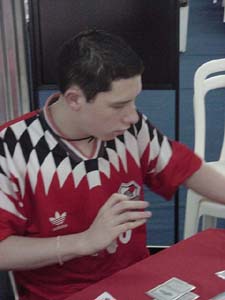 Guilherme opened up with the Phyrexian Furnace and then gave Matias a glimpse of the Boil in his hand to cast Land Grant. He needed Green mana to cast his creatures but Gabrenja was tapped out from casting a Sapphire Medallion and thus couldn't cast what would have been a game breaking Counterspell.

The Taiga let Guilherme play a River Boa which Gabrenja ignored to Merchant Scroll for Intuition and after deep deliberation decided to keep a while longer. He found a second Medallion and played it. On the following turn he went into another of his shaking thinking lapses before allowing a Mogg Fanatic to resolve.

He had to call a judge over to answer a rules question about Phyrexian Furnace. He Intuitioned for Donate and gave Fonseca a brand new Blue enchantment to pay upkeep for. The Brazilian drew a huge breath and paid the upkeep. He then dropped a second River Boa. Still his attempts where quickly squashed when Matias Gabrenja used a Merchant Scroll to find his Capsize and end the lopsided round.