Round 6: Antarctica vs. A Little Too Sick 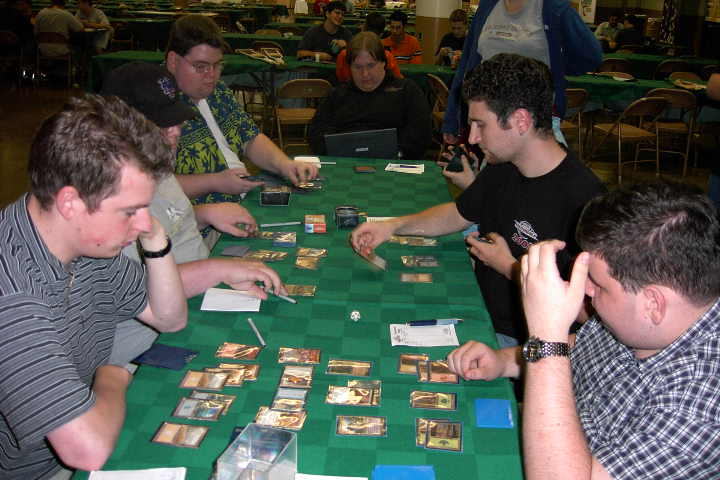 Antarctica vs. A Little Too Sick

Round 6 saw "the new Finkel" (rising star Kamiel Cornelissen) take on the old one. Kamiel has teamed up with Virginia players Kyle Rose and Eric Froehlich and they're calling themselves "A Little Too Sick." They took their 4-1 record into battle against Team Antarctica. Finkel slammed down a

Finkel slammed down a brand new Sideboard.com deck box before his match with Froehlich. The box sports the artwork for Hammer of Bogardan, Cursed Scroll, Morphling and - covering the entire back of the box - Finkel's upcoming Odyssey card, Shadowmage Infiltrator. Froehlich played a turn 2 Fertile Ground and Finkel got to do some more slamming - Vindicate. Ouch. Froehlich was shuffling up for game 2 before I could even look up to see what Finkel was killing him with.

Steve-O and Kamiel were done almost as quickly. Steve had to mulligan down to 5 cards. He kept a hand with one land and a Utopia Tree, mounted a comeback once he drew his second land, but couldn't quite come all the way back. 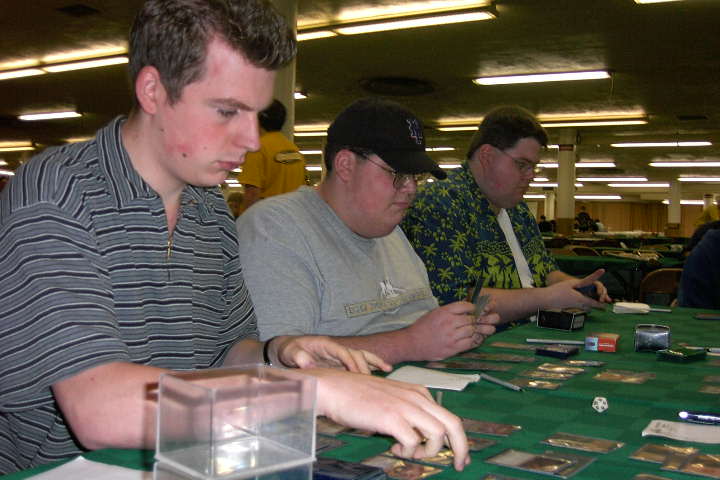 Rose and Dan-O played the black-red mirror match. Rose showed off his mastery of little beatdown monsters, clearing a path with Tribal Flames and Shivan Emissary and then dropping the hammer with Halam Djinn. Dan tried to stabilize with an Annihilate, but Pouncing Kavu removed any chance he had. The other game 1 saw Steve-O playing green-white-red while Kamiel ran blue-white-red. Steve had turn 3 Fires of Yavimaya, but he didn't draw many creatures and that game bogged down. Basically, each team wound up with it's green deck facing off against the other team's control. The differences were than Finkel splashed in black with his blue and white cards while Kamiel splashed in red. The decision of which color to splash seemed completely determined by which Apocalypse cards were available in each team's card pool.

While Finkel finished off Froehlich and staked his team to a one match lead, Rose couldn't find a Swamp and that match stood even at 1 apiece. This reporter couldn't help but cheer for Dan in game 3 as his dinner just arrived and Steve O and Kamiel were still mired down somewhere in game 2, with no end in sight. It was foolish of me to have counted on Dan playing quickly. I think his teammates gave his the fast and bloody black-red deck just so the notoriously slow OMS wouldn't pick up draws. Dan O shuffled for about 15 minutes, giving Kamiel time to eventually win that game using Quicksilver Dagger, Goblin Legionnaire, Jilt, and Dega Disciple (targeting Dream Thrush) to get through the last 6 points of damage. Steve had no way to play around the Jilt. 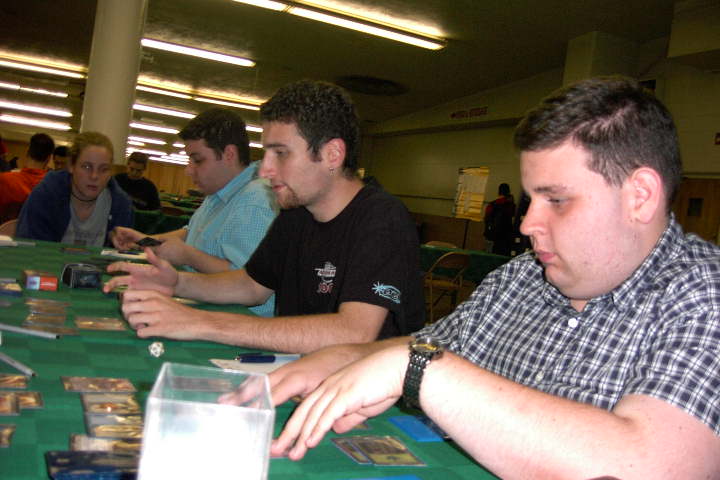 Thus it all came down to Dan and Kyle.

Both Rose and Dan-O had solid draws in game 3 with each playing 3 spells over the first four turns of the game. The board wound up with a Maniacally Raged Lava Zombie beating down on Rose's behalf. Dan crossed his fingers and double blocked with Firebrand Ranger and Mire Kavu. When Rose did nothing worse than assign damage to both of them, Dan let out a loud "yes!", untapped, and Bogged Down the last two cards in Rose's hand. Rose did still have a Vicious Kavu and Dan was down to 8 while Rose was still at 20. Dan played Ravenous Rats and Kavu Aggressor, neither of which could deal with the Vicious Kavu. Next came Duskwalker, which could block, but Rose top-decked a Terminate and suddenly the match was over!