Round 6: Bruno Feitosa vs. Carlos Huarapil 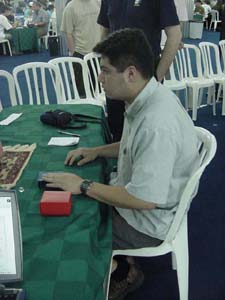 A second Wasteland put him into mana problems while the Brazilian played a Feeder and a Nevinyrral's Disk. The Chilean bounced back at the exact time with another land and a Seal of Cleansing. Huarapil soon found himself in trouble when Bruno started sending in his Treetop Village while keeping back two Feeders and a River Boa. On the defensive side Carlos had a Spectral Lynx and the Mage. When he found the second Lynx the Brazilian let him rest at ten, since his Village wouldn't survive a bump with the two Lynxes.

The Chilean liked his defense so much he sent in one Lynx and played a Rotting Giant. A Duress from the Brazilian on turn later revealed his hand: Masticore, Phyrexian Negator and another Rotting Giant. If at start Huarapil's deck seemed a classic Finkula but each card he revealed pointed to a different deck.

With the protection from Green allowing the Lynx to sneak through Carlos played a Masticore to hold the ground and seemed in control of the game. Until Bruno noticed something: he had a River Boa. And Carlos had two Tundras. That seemed like a good plan. The Feeders threw their counters to the Boa and all of the sudden the Lynxes were losing the race to the Boa.

Huarapil sent the whole crew in dropping Bruno to a mere one point before conceding. He had simply taken too much damage early on and when Bruno switched to the "huge islandwalking River Boa" plan the Chilean didn't have enough time to catch up in the damage race.

They sideboarded silently with Carlos showing a Swords to Plowshares and shaking his head. He would have liked to draw one of his four in the first game. He seemed to be in better luck when he came out strong with two Meddling Mages naming Pernicious Deed and Masticore.

Little did he know that Bruno was one mere land away from wrecking havoc: he had his three sideboarded Chokes in his hand. The Brazilian drew hopefully but only got a Fyndhorn Elves.

Carlos increased his army with Mother of Runes and dropped a tricky Mother Of Runes. In came the first Choke and strangely Carlos decided not to blow the Seal probably more scared of the table sweeping Disk. Again he sent his troops in dropping the Brazilian down to sixteen and frowned when Bruno dropped the second Choke.

A Duress revealed a lone hand in Huarapil's hand and Feitosa found an opening: Natural Order! In came a Spiritmonger (after looking at the Penumbra Wurm for quite a while), since the Verdant Force had been sided out.

Now in big trouble the Chilean sent a Mage, with protection from Green, through and dropped a Spectral Lynx to hold back in defense. On the next turn his huge defensive line gained another body, this time a huge yet troublesome body: Phyrexian Negator.

A second Spiritmonger gave Feitosa two incredible creatures but he still had to sit back in defense or risk losing any possible damage race. he was at eleven facing twelve points of creature damage on the other side.

His troubles only got worse when Carlos found a Perish. The Green-hating spell forced Bruno to lose everything except a single Spiritmonger. Despite having his opponent now at nine Carlos decided to sit back until he could figure a way around the Spiritmonger.

Feitosa finally dropped the Disk he had been holding forever but still Carlos thought long and hard before destroying it with the Seal. Finally he did and sent the turn over. The crowd was gathering since the round had ended and the noise level - only matched by large airports - wasn't helping both players think. 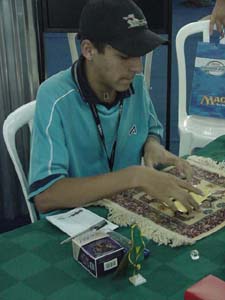 If the Disk gave Huarapil food for thought a Spike Weaver made him rethink his next play: Meddling Mage. The smiling Pikula came in chasing away River Boas and Feitosa's hopes of dealing the twenty damage points seemed harder by the turn.

They played Draw-Go for a few turns in perfect silence, them at least since the Brazilian support crowd was quite rowdy. Now visibly nervous the small Brazilian played a second Natural Order to fetch out the River Boa. For a second the whole crowd stopped. Carlos wasn't the only one not expecting the Boa to show up in that way. Clearly Bruno Feitosa knew his deck inside out and was playing it to the limit of its abilities.

Carlos Duressed away the third Choke as the slithering snake slowly bled him to death. Not only were his islands locked down by Chokes they were also giving his opponent a way to kill him. At nine Carlos finally found a miraculous Brainstorm. With it he grabbed two ways to kill the snake: Perish and Swords to Plowshares! In fact with those two spells he could sweep Feitosa's side of the table out of his way.

He Perished and Feitosa could only change his Spiritmonger - getting it promptly Sworded away - and fog with the departing Weaver. He played a huge Penumbra Wurm on his next turn and sat back waiting for the huge Chilean crew to bring him a large amount of pain to his side of the table.

After a long deliberation, and some confusion about the life totals Huarapil sent the his crew in, leaving only the Lynx and the Mother behind. He then played a second Negator and a second Mother and passed the turn to the now despairing Feitosa.

He sent his Village and the Wurm in dropping Carlos all the way down to one. Just like Carlos did to him on the first game. Still, and again like Carlos, that last elusive life point meant he had lost the game.

Bruno retouched his sideboard again and with a mere four minutes on the clock, they shuffled in a hurry. Carlos took a mulligan and Feitosa took the time to carefully pile shuffle despite having less than two minutes to solve the round. It seemed he wasn't inclined to rush the third game only to lose it to a mistake or bad hand.

Carlos played a first turn Duress choosing a Natural Order over Deed, Disk and Choke. When he asked the judge if he could note down the cards, with the new floor rules, it seemed obvious they both had no intentions of rushing the game. They went through the motions of the five extra turns with no real effect ending the game at the high life totals of 16-20.