Round 7: Diego Ostrovich vs. Sergio Longo 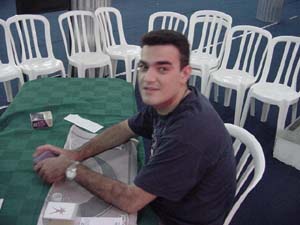 The last round of the day, with on one side Sergio Longo riding what seems like the perfect metagame call for a Trix-rich environment: Fish. He calls his deck "Santos, Santos, Golo" after a battle cry for his football club. On the other side a name that needs no introduction in Latin America. Diego Ostrovich is the kind of player who knows Feature Matches very well and is used to the pressure of the top tables. He is also playing a metagame deck: Finkula.

A first turn Duress from Diego revealed Two Longs (Rootwater Thief), a Counterspell, Curiosity and Winter Orb. The Argentinean noted down the cards and took the Orb. He liked the discarding theme so much he cast a Gerrard's Verdict on the following turn grabbing two Thieves (while a third one was on the table, thus revealing what Sergio had just drawn).

On the following turn Ostrovich tried to play a Pikula but Longo was tired of being bossed around. He countered and attacked with his now Curious Merfolk stealing Swords from Ostrovich's deck. The Argentinean finally found a creature in the pinkish shape of a Spectral Lynx.

This was, however, irrelevant to the Curious Long. This time he flew into the Red Zone and stole another Swords to Plowshares. Longo then tried to slow down the game with a Winter Orb. On the next turn he tried to drop the hammer with a Lord of Atlantis but Diego was having none of that nonsense; he fetched out a blue mana source and countered it.

Or he would have countered if Sergio didn't have a Daze just waiting for it. With the Lord now on the table the Thief could attack with impunity through the ground. The Argentinean was in big trouble and by the way he slumped in his chair it was obvious he knew this perfectly well.

As the turns dragged by with the Thief doing damage, and netting the Brazilian a lot of cards, Ostrovich was further into trouble. He threw a Verdict at Longo to open the way for a Swords to Plowshares but Sergio had two Force of Wills for the spells. On the next turn, facing lethal damage, the Diego packed his cards and reached into his sideboard.

They sideboarded in that quiet, tired silence that you can only get after a full day of playing, thinking and talking about Magic. Diego's first hand didn't give him much to think about, he simply mulliganed it only to keep a one land hand next (the land being a Flooded Plains). Granted he had a Duress and a Brainstorm but Sergio also had a Wasteland.

Luckily for the Argentinean he found a Underground Sea two turns later getting a chance to steal a Orb with Duress while Longo tried to take advantage of the mana screw by dropping a Tidal Warrior. When he tried to play a Thief Diego Forced it. The play was so important Longo bounced his two lands with a Gush to find protection for the Thief but to no avail. 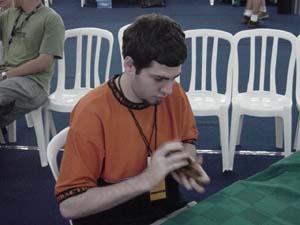 Two extra Wastelands brought Ostrovich down to one land once again but the single Warrior wasn't much of a pressure. Longo played another Merfolk and used a Daze to stop a Brainstorm keeping Diego in deep mana problems. Soon facing four tiny, yet persistent, Merfolks the Argentinean leaned back to consider his options.

He played a Gerrard's Verdict that Longo couldn't stop. The Brazilian dropped a land and a Rushing River giving Ostrovich some extra breathing room. Breathing room that he took back on the following turn with a Curiosity. Finally Ostrovich sneaked a spell by: Meddling Mage, naming Lord Of Atlantis.

He was at nine and the Mage could only slow the beating. The two flying fishes nibbled at his life while his Tidal Warriors tried to pin down his mana. A Swords to Plowshares killed a Manta Riders, getting rid of the Curiosity and the Argentinean tried to gain more time with another Verdict.

That would have been a good plan but Longo read the card twice and Misdirected it back to the stumbling Diego for three extra life. He added serious injury to nasty insult locking Ostrovich's few lands under a Winter Orb while his Thief tried to finish the job. Ostrovich tried to put a stop to that with a Vindicate on the Thief but Longo emptied his hand as well to Forced it.

With Diego's life fading away they fought on each turn, spell by spell while like Swiss Clockwork the Rootwater Thief flew into the Red Zone alone until Ostrovich drew his final card. He sighed, passed the turn after a countered Seal of Cleansing but Sergio decided not to swing with all the creatures fearing a Swords. Still the extra draw couldn't save the Argentinean.

A final note on these two players. They were extremely correct during the match and cordial with Longo helping Diego translate Lord Of Atlantis to set the Meddling Mage and Ostrovich quickly cleaning up a damage timing issue with Sergio. They put on a great show and a very interesting match.